ISCI Report: Campaigns of violence towards Rohingya are highly organized and genocidal in intent 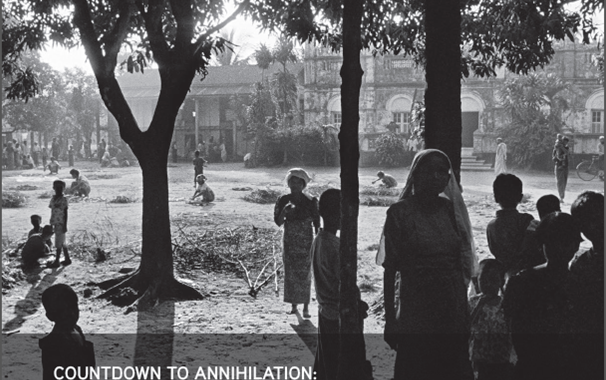 [ISCI PRESS RELEASE] London, 26 October 2015: Persecution of the Rohingya minority in Myanmar has been orchestrated by the government, state-level officials and Buddhist monks, according to the findings of an 18-month investigation into state crime in Myanmar.

Researchers from the International State Crime Initiative (ISCI), based at Queen Mary University of London (QMUL), found compelling evidence that the Rohingya face mass annihilation and are in the the final stages of a genocidal process. The findings are published in a new report Countdown to Annihilation: Genocide in Myanmar, which includes testimonies from victims and perpetrators of violence, obtained during four months’ field research in Rakhine State.

Drawing on leaked government documents, the report provides evidence that the persecution of the stateless minority—which includes ghettoisation, sporadic massacres, restrictions on movement, and other measures—amounts to a longer-term strategy by the state to isolate, weaken, and eliminate the group.

Professor Penny Green, Director of ISCI, said: “While attention is focused on the forthcoming elections, the Rohingya people are harassed, terrorised and slaughtered. We found widespread evidence of killings, torture, rape, arbitrary detention, and State sanctioned campaigns of religious hatred.”

Participants in mob attacks on Rohingya neighbourhoods in the Rakhine State capital of Sittwe in June 2012 spoke openly of how they were organised into teams by local administrators, equipped with weapons, and shuttled in buses to sites of attack.

Professor Green added: “While the Rohingya have been persecuted for decades, they have faced an intensified and unrelenting campaign of State-led terror since 2012. They have had their land removed from them, their civil rights have been rendered meaningless, their livelihoods have been destroyed, and they have been forced into detention camps.”

The report found evidence that the State’s intensified ‘othering’ of the Rohingya as outsiders, illegal immigrants, and terrorists, has allowed Rakhine nationalists and Islamophobic monks to orchestrate campaigns of race and religious hatred against the Rohingya.

“In Myanmar, dehumanisation and stigmatisation techniques are reinforced through segregation and systematic isolation. The situation is sufficiently desperate to warrant comparisons with Germany in the 1930s and Rwanda in the early 1990s,” Professor Green said.

“In Germany, Jews were banned from public places, excluded from work in a wide range of professions, ghettoised and later forced into concentration camps where they were systematically weakened to the point of death. In the Rohingya camps, villages and the Aung Mingalar ghetto in Sittwe, a deeply weakened and traumatised population endures the barest of lives and denial of basic human rights with the ever-present fear of violent attack.”

The Rohingya have been subjected to four of the six stages of genocide: stigmatisation, harassment, isolation, and systematic weakening.

The report warns that in Myanmar, just two stages remain for the Rohingya: extermination, and ‘symbolic enactment’ – the removal of their existence from official State history. Its authors state that the elimination of the Rohingya, while not always visible, is well underway.

According to Professor Green: “Myanmar’s Rohingya are being slowly annihilated through sporadic massacres, mass flight, systematic weakening and denial of identity. A genocidal process is underway in Myanmar and if it follows the path outlined in our report, it is yet to be completed. It can be stopped but not without confronting the fact that it is, indeed, a genocide.”

About the report:
The report will be launched on Thursday 29 October as part of a week of events, talks, film & photography with the aim of drawing attention to the ongoing genocide against the Rohingya.
The week’s events feature renowned photographer Greg Constantine, Al Jazeera, & leading experts from the field including former UN Special Rapporteur for Human Rights in Myanmar, Tomás Ojea Quintana.