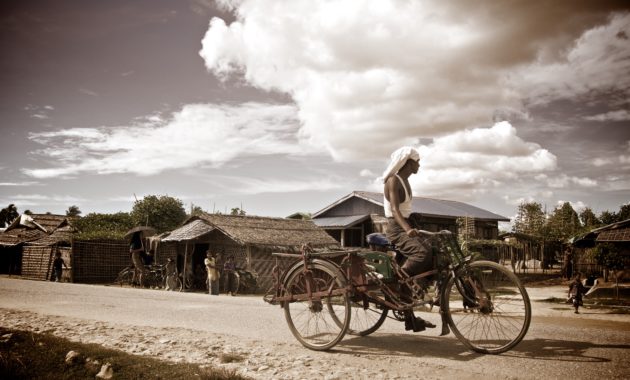 As Myanmar’s Rohingya ethnic minority enter a new and terrifying phase of persecution, Aung San Suu Kyi’s government reacts with crude denials, the censoring of its independent press, and the barring of human rights activists entering the country. What will it take for Aung San Suu Kyi and the international community to confront the genocide under her watch?

A year ago the International State Crime Initiative (ISCI) published the results of our 12-month study investigating the nature of persecution against the Rohingya. We concluded that the Myanmar state’s policies of persecution constitute genocidal practice.[1] Our research, and that of others[2], confirmed systematic, widespread, and ongoing violations, including: institutional discrimination, torture, sexual violence, arbitrary detention, destruction of communities, apartheid structures of segregation, targeted population control, mass killings, land confiscation, forced labour, denial of citizenship and identity, severe restrictions on freedom of movement and access to healthcare, food, education, and livelihood opportunities; and state-sanctioned campaigns of religious hatred. Our research revealed a long history of institutional and organized persecution precisely paralleling the trajectory of other acknowledged genocides.

Our investigation conceptualised genocide as a process, building over a period of years, involving an escalation in the dehumanisation and persecution of the target group. The Rohingya have been stigmatised as ‘illegal immigrants’, ‘Bengalis’, and ‘terrorists’, deserving of no place in Myanmar society. Following organized violence in 2012, the Rohingya from Sittwe and surrounding areas were rounded up into effective detention camps, where they have since remained isolated and impoverished. The Rohingya have been persecuted though disenfranchisement as well as violent and psychological intimidation. Our evidence demonstrated, without any doubt, that the Rohingya are currently experiencing the genocidal stage of systematic weakening wherein state strategies denying access to healthcare, livelihood, food and civic life render a population so physically and psychologically diminished that they are unable to engage in purposeful life.

In August 2016, in a move designed to counter international public opinion, the Myanmar government announced the formation of a high-level commission, headed by Kofi Annan to investigate the situation in Rakhine state. We, and others, tentatively welcomed the move, but expressed the view that the commission’s findings would most likely result in a whitewash. In 2004, on the 10th anniversary of the Rwandan genocide Kofi Annan, in his capacity as UN Secretary-General unveiled his ‘Action Plan to Prevent Genocide’, a self-proclaimed ‘legacy’ designed to leave the UN both “better equipped to prevent genocide, and able to act decisively to stop it when prevention fails”.

Annan claimed to have not personally witnessed anything he would describe as oppression during his September 2016 visit to Sittwe and Aung Mingalar ghetto. This was a breath-taking moment for anyone with firsthand experience of life in Aung Mingalar and the detention camps on the outskirts of Sittwe. When George Soros visited Aung Mingalar in 2015 he likened it to Nazi Germany’s Jewish ghettos of 1944. Aung Mingalar and the camps housing around 145,000 dispossessed and stateless Rohingya are effective prisons visibly characterized by endemic illness, hunger, fear and futility. How militarized checkpoints, apartheid practices, and the relegation of the Rohingya to a form of bare life, do not constitute oppression is something that may only be explained by the special relationship Annan has with his appointer, Aung San Suu Kyi. Given her record of silence and complicity it is unlikely that Myanmar’s de facto leader would have selected a commission intent on revealing the full extent of the government’s crimes against the Rohingya.

On October 9th a new reign of terror exercised by the Myanmar state against the Rohingya emerged and has continued to escalate. Credible evidence of widespread killings, arbitrary detention, mass rape, collective punishment, arson and village clearances –  committed by security forces – continue to emerge from Northern Rakhine State (NRS), home to approximately 1.1 million Rohingya. On-the-ground reports reveal a consistent and chilling picture of a trapped, terrified, and desperate Rohingya community. Reports of abuse are consistent with historical practices of state repression and violence in the region. Evidence suggest a brutal and indiscriminate new phase of state violence is taking place, echoing the crackdowns of 1977-8 and 1991-2, which saw hundreds of thousands of Rohingya flee to Bangladesh. These events mark a disturbing, yet entirely predictable pattern in the genocidal process. Genocide begins by reducing the target group’s strength and undermining moral empathy for the victims, before leading to more violent forms of persecution and eventually, particularly if perpetrators of violence are not held to account, mass killings.[3]

The election of Suu Kyi’s National League for Democracy (NLD) in 2015 received much global optimism. The Nobel peace laureate has, however, entrenched the persecution of the Rohingya; earlier this year she demanded foreign governments refrain from using the term ‘Rohingya’, and the Myanmar government’s public statements continue to simultaneously demonise and deny the existence of the Rohingya identity. An opinion piece which appeared in the 1 November issue of the state run Global New Light of Myanmar implicitly referred to the Rohingya as a ‘terrorist’ ‘foreign’ threat in NRS and a ‘thorn which must be removed’.[4] Myanmar’s own Human Rights Commission has refused to acknowledge the existence of the victim group and the domestic criminal justice process is itself being used as an instrument of persecution.

Despite the fact that this is the most significant test of Suu Kyi’s leadership, the country’s de-facto leader has remained remarkably indifferent. Neither she, nor her president, Htin Kyaw, have troubled themselves with a visit to Rakhine state during the current crisis. Suu Kyi continues to say very little, other than that investigations will be conducted fairly and according to the rule of law. Her claim that ‘we have not tried to hide anything on Rakhine’ is disingenuous. Such statements run counter to all reports that we, and our colleagues in the human rights community, are receiving from the ground and can only be interpreted as denial – a familiar and integral strategy deployed by criminal states to direct blame away from themselves.

Academics have formulated useful analyses for unravelling patterns of state denial. Cohen terms the vocabulary of official refutation the ‘spiral of denial’: First, officials claim ‘it didn’t happen‘, by presenting the incidents as strange, illogical or impossible: ‘There was no massacre, no torture’. However when the media, human rights organizations, and victims demonstrate otherwise, authorities need to label what happened as in fact something else. i.e. the deaths were simply ‘collateral damage’. Then the crucial layer of denial, ‘yes it happened, but actions were completely justified on the basis of protecting national security’, part of the ‘war against terrorism’. ‘Yes, there was use of force and violence on the part of security forces, but directed towards dangerous individuals who intended to harm us’.[5] Cohen theorises that official state discourse might also take the shape of, ‘they are lying’, ‘the media are biased’, ‘the world community is just picking on us’.[6]

Rather than taking allegations of security force abuse seriously, Suu Kyi’s government has adopted military dictatorship-era tactics of blanket denial, an absolute ban on international observation, severe limitations on humanitarian access within the region, the muzzling of the press, and the ‘blacklisting’ and deportation of human rights activists. On October 31, a Myanmar Times journalist, Fiona MacGregor, was fired, at the instigation of the Ministry of Information and following Facebook denunciations by the President’s Office spokesman, U Zaw Htay, for publishing allegations of the rape of dozens of Rohingya women by Myanmar Army soldiers. The leading English language newspaper has been forced to suspend reporting on Rakhine state until further notice.

Suu Kyi’s self-appointed spokesman, U Zaw Htay has claimed that reports of genocide and violence in Rakhine state are part of a conspiracy orchestrated by human rights lobby groups to undermine the state, while the Myanmar military’s ‘True News Information Team’ has deflected blame for the killings, rapes and village destruction onto its Rohingya victims.[7] The release by Human Rights Watch of satellite imagery confirming ‘massive’ fire-related destruction across three villages in Maungdaw prompted the Presidential Office headline, ‘Military’s information team refutes fabrication about massive destruction in Rakhine’. Officials continue to insist that Muslim residents are burning their own houses down, in attempt to ‘tarnish the image of the troops’.[8] Though the government has admitted that violence has taken place, including the killing of Muslims, it insists its military ‘clearance operations’ are aimed at ‘violent attackers’ armed with ‘machetes’ and ‘wooden clubs’.[9]

Government officials have claimed that independent media and human rights reporters are misleading because they have failed to visit the region, duplicitously calling for onlookers to observe the ‘actual situation on the ground’ before publishing their reports. The ridiculous irony of these claims appears lost on the Myanmar government as it continues to deny all international attempts to access the region and ignores repeated calls for an independent investigation. NRS remains an information black hole and, in the absence of independent international verification, the onus must be on Aung San Suu Kyi’s government to disprove the credible claims of genocidal violence that continue to emerge.

In the meantime, a new regional police force is being trained to protect ‘ethnic Rakhine living in the Muslim-majority region’ from Muslims who are ‘trying to seize land and extend their territory in northern Rakhine and kill Rakhine ethnics’, according to the Rakhine State police chief Colonel Sein Lwin. Effectively a local militia, recruits will fall under the control of Maungdaw’s border police Commander and will be paid and provided with ‘weapons and other equipment’, deployed to guard border posts in the tense north.

The Arakan National Party spokesperson told us back in 2014 that his organisation had been pressuring ‘government people’ to train and arm ‘indigenous people’ in the border area with ‘rifles and bullets’ so as to protect themselves. Leaked official documents corroborate these claims.[10] It seems that the NLD supports such a development. An NLD member and a Rakhine State parliament minister, Min Aung, said the new recruits would help protect residents from militants on the basis that the ‘minority ethnic people need to protect themselves from hostile neighbors‘, referring to the Rohingya, which make up approximately 90% of the population in NRS. The green lighting of this initiative is of significant concern in a climate of extreme fear, insecurity, and militarization, where allegations of human rights abuses by security forces persist, and a high lack of transparency and accountability exists.

The Rohingya are widely disdained by Myanmar’s majority Buddhist population, branded as illegal immigrants and a terrorist threat. Nationalist views serve to bolster popular support for the Tatmadaw, at a time where it seeks to strengthen control in response to popular backing which ushered Suu Kyi’s NLD into power. Our research also revealed that the Rohingya are being scapegoated by the government to divert Buddhist Rakhine attention away from their own deeply held grievances, surrounding ethnic discrimination, economic woes, and resource exploitation.

Aung San Suu Kyi, as the country’s de-facto leader, must be seen as ultimately responsible for the atrocities being perpetrated against the Rohingya. The evidence of genocide is now irrefutable. The Rohingya need strong advocates – they need the world to understand that the persecution they face is genocidal and that only enormous pressure on the Myanmar government will succeed in halting the devastation.