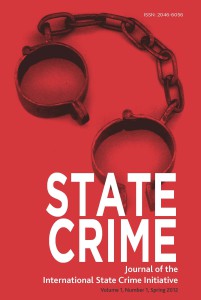 ‘State crime is an indispensable journal for anyone concerned with all forms of official wrongdoing, which should be for all of us’ – Richard Falk (Albert G. Milbank Professor of International Law and Practice Emeritus, Princeton University and Distinguished Honorary Fellow at ISCI)

State Crime is the first peer-reviewed, international journal that seeks to disseminate leading research on the illicit practices of states. The concept of state crime is not confined to legally recognised states but can include any authority that exerts political and military control over a substantial territory (e.g. the FARC). The journals focus is a reflection of the growing awareness within criminology that state criminality is endemic and acts as a significant barrier to security and development. Contributions from a variety of disciplinary and theoretical perspectives are welcomed. Topics covered by the journal include, torture; genocide and other forms of government and politically organised mass killing; war crimes; state-corporate crime; state-organised crime; natural disasters exacerbated by government (in)action; asylum and refugee policy and practice; state terror; political and economic corruption; and resistance to state violence and corruption.

For individual subscriptions, for both digital and hard copies, please go to: http://www.marston.co.uk/pluto-journals/scj.html. Please contact Roger Van Zwanenberg (Rogervz@plutojournals.com) if any problems are encountered.

The Editors-in-Chief of State Crime (‘the Editors’) are accountable for everything published in their journal and, as such, strive to meet the needs of readers and authors and to constantly improve their journal. The Editors strive to ensure that peer review at their journal is fair, unbiased and timely. The Editors’ decisions to accept or reject a paper for publication is based on the paper’s importance, originality and clarity, and the study’s validity and its relevance to the remit of the journal. The Editors encourage ethical research. The Editors seek to foster debate and consider cogent criticisms of work published in their journal. They champion freedom of expression and seek to maintain the integrity of the academic record. The Editors are willing to publish corrections, clarifications, retractions and apologies when needed. The Editors have a duty to act if they suspect misconduct and will first seek a response from those accused. If they are not satisfied with the response, they will ask the relevant employers or some appropriate body to investigate. The Editors should make all reasonable efforts to ensure that a proper investigation is conducted and make all reasonable attempts to persist in obtaining a resolution to the problem.