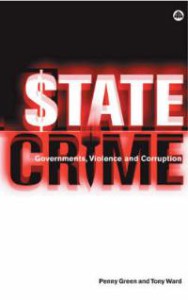 The most serious crimes in the modern world, on any reasonable definition, are acts that are largely committed, instigated or condoned by governments and their officials: for example, genocide, war crimes, torture and corruption. However, state crime is under-acknowledged by popular and academic authors. Calling these activities ‘crimes’ should be uncontroversial as they violate international and/or national criminal law. A purely legalistic definition of state crime, however, is unsatisfactory for at least three reasons:

It would exclude some of the greatest mass violations of human rights of the past century, such as the Chinese famine of 1959-61 in which an estimated 30 million people died. They were victims of state incompetence, deception and extreme economic exploitation, and the Chinese governments awareness of the unacceptability of its own actions is shown in the drastic measures it took to conceal the truth. But international criminal law does not appear to prohibit starving your own population in peacetime, unless the intention is to destroy a particular ethnic group.

When two or more armed factions are committing atrocities in a territory they seek to control, it seems arbitrary to denote one sides activities as state crime and the other as something else.

Criminal law is concerned mainly with individual liability. The study of state crime is more concerned with the role of organizations in committing, perpetrating or condoning crime.

ISCI takes the term crime to include all violations of human rights that are deviant in the sense that they infringe some socially recognized norm. Our understanding of human rights reflects the broad principles underlying international law but we do not think that the precise scope of our inquiries as criminologists or social scientists should be determined by lawyers. We take states to include all bodies that seek to achieve a monopoly of the legitimate use of force in some substantial territory, whether or not they are internationally recognized as states. State crimes are crimes committed or condoned by the personnel of such organizations in pursuit of organizational goals. For example, if a single police officer force takes a bribe, that is not necessarily a state crime. But if the government turns a blind eye to bribery because it is the only way the police can achieve a reasonable income, or if bribery is part of an informal strategy for controlling the local drugs trade, then it is a state crime.