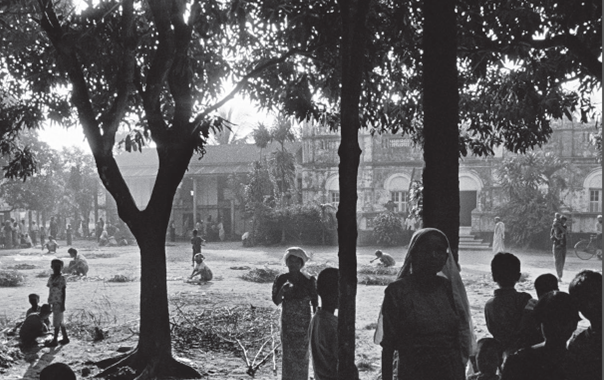 The Rohingya face the final stages of genocide. Decades of persecution have taken on a new and intensified form since mass killings in 2012. The marked escalation in State-sponsored stigmatisation, discrimination, violence and segregation, and the systematic weakening of the community, make precarious the very existence of the Rohingya.

ISIC’s report analyses the persecution of the Rohingya against the six stages of genocide outlined by Daniel Feierstein: stigmatisation (and dehumanisation); harassment, violence and terror; isolation and segregation; systematic weakening; mass annihilation; and finally symbolic enactment involving the removal of the victim group from the collective history. The report concludes that the Rohingya have suffered the first four of the six stages of genocide. They have been, and continue to be, stigmatized, dehumanised and discriminated against. They have been harassed, terrorized and slaughtered. They have been isolated and segregated into detention camps and securitised villages and ghettos. They have been systematically weakened through hunger, illness, denial of civil rights and loss of livelihood. All of this places them at high risk of annihilation.

The evidence documented by ISCI researchers reveals that these genocidal processes have been orchestrated at the highest levels of State and local Rakhine government. They have been led by State officials, Rakhine politicians, Buddhist monks and Rakhine civil society activists. The Rohingya have been subjected to a virulent and official nationwide policy and propaganda campaign which has incrementally removed them from the State’s sphere of responsibility. The State’s persistent and intensified ‘othering’ of the Rohingya as outsiders, illegal Bengali immigrants and potential terrorists has given a green light to Rakhine nationalists and Islamophobic monks to orchestrate invidious campaigns of race and religious hatred reminiscent of those witnessed in Germany in the 1930s and Rwanda in the early 1990s.

The broader parallels with other genocides are stark and serve as a bleak and urgent warning. In Rwanda, the state achieved its goal of mobilising ordinary Hutus to commit mass murder through propaganda, terror techniques and the elimination of moderate Hutus and the political opposition.[1] The Sangha-led stigmatization of the Rohingya described in this report vividly recalls the Rwandan government-backed propaganda campaigns, where the ‘othering’ had the effect of both mobilising and desensitizing Hutu perpetrators to the mass killing of their Tutsi neighbours.

In both Germany and Rwanda the use of ethnically marked identity cards became central in the implementation of the genocide. For the vast majority of Rohingya, the absence of an identity card or the possession of a white or green identity card marks them out as people without citizenship and entitlement.

Dehumanisation and stigmatisation techniques are reinforced through segregation and systematic isolation.[2] Social and physical exclusion are key elements of genocide controlled by the state. In Germany, Jews were banned from public places, excluded from work in a wide range of professions, ghettoised and later forced into concentration camps where they were systematically weakened to the point of death. In the Rohingya camps, villages and Aung Mingalar ghetto a deeply weakened and traumatised population endures the barest of lives and denial of basic human rights with the ever-present fear of violent attack.

In addition to a high level of cooperation between the state security forces and the bureaucracy, the participation and complicity of the majority of the local population is a necessary prerequisite for genocide.[3]

Once a group has been classified and clearly identifiable or segregated in ghetto and camp-like spaces, the distinction between ‘us’ and ‘them’ is physically reinforced. The state and its proxies can then continue with an unhindered programme of dehumanisation aimed at securing the complicity of the local population through a combination of propaganda, coercion and terror. The Rakhine people, who themselves have suffered decades of oppression and neglect at the hands of the Myanmar government to the point where their own culture is under threat, are particularly receptive to nationalist and religious propaganda.

In Myanmar’s genocidal process, two stages remain: extermination and ‘symbolic enactment’. While extermination or mass killing on the scale of the German, Rwandan, Kosovan or Cambodian genocides is not inevitable, it cannot be ruled out. This report demonstrates that the infrastructure and ideological base for mass killings exist, and that the elimination of the Rohingya, though not always visible, is well under way. Myanmar’s Rohingya are being slowly annihilated through sporadic massacres, mass flight, systematic weakening and denial of identity.

Elements of ‘symbolic enactment’ are also present – not least in the state’s elimination and denial of the ‘Rohingya’ ethnicity and its effective removal of the word from the lexicon of the Myanmar language.

This report concludes with an urgent warning to civil society in Myanmar, to international civil society, to the government of Myanmar and to international states. A genocidal process is underway in Myanmar and if it follows the path outlined in this report, it is yet to be completed. It can be stopped but not without confronting the fact that it is, indeed, a genocide.

“The government is not killing us with guns but is indirectly killing us through a lack of healthcare and forcing us to leave to third countries. We are prisoners, living in a prison. We are not getting a normal food supply. We have no education here. We have nothing here. How can we continue with life here?” [4]