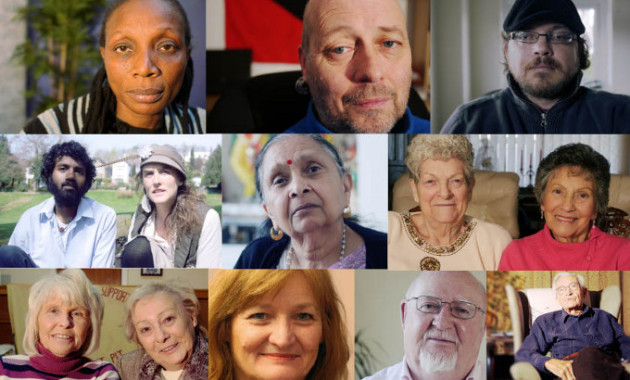 Earlier this Month, Rich Mix, London, hosted the launch of ‘We Can Win: Stories from 50 years of struggle’ – ten short film interviews documenting fifty years of struggle in the UK.  Shown chronologically in three sets the interviewers, all key organisers in their particular fights, describe campaigns for social and economic justice, all with different motivations and tactics, but demonstrating remarkable similarities.  Not all successful, and making a far from comprehensive list, these films paint a remarkably rich and varied picture of the recent history of struggle in the UK, and of those who engage in these movements.

The films were produced by Jubilee Debt Campaign for the Economic Justice Project “which aims to provide opportunities for people to learn about the basics of economics and the financial crisis, vital tools for social and economic justice activists. It also brings people together who have similar aims, but don’t usually work together. From global justice campaigners, to anti-cuts activists, there has never been a better time to recognise what we share and how we can strengthen each other’s work.”

The series of film interviews opens with Ken, who assisted in barricading Don Cook’s home during the St. Pancras Rent Strike, 1960.  Funny and instantly likeable, Ken speaks warmly of pianos on landings and food being sent in on clothes lines.  He also discusses the strike’s support networks, and speaks of the need to harness the power of the trade union movement now: ‘united, organised action is the way forward for the people’.  Speaking of our current government and system, demonstrating his continued passions, he says, ‘there’s only one thing to do – stop them. There’s only one way to stop them – get rid of them’.   He encourages us to look back to Peasants’ Revolt 1381 to see that mass, organised resistance can work: ‘people can move mountains when they’re organised’.

Following Ken two charming and inspiring ladies, Vera and Gwen, detail their involvement in the Dagenham Equal Pay Strikes, 1968 & 1984.  In 1968 unequal pay and standing led the women at this Ford plant to ‘down tools’ and walk out.  Union support, and that of women at other factories, was vital – though the interviewees recall resistance by both union workers and their families at women’s involvement in this kind of action.  Their 1968 strike led to the Equal Pay Act 1970, and their 1984 action entitled them to the same grading as men, and the increase in pay it brought.  Both union support and solidarity were key: ‘if one person says no it’s a failure’.

Jimmy, the next interviewee, discusses the Upper Clyde Shipworkers’ work-in, 1971 – 1972.  At a point when ship-building was set to lose thousands of workers they decided it was the time to take action.  They opted for a ‘work-in’ over a strike or sit-in as it was felt this showed ‘responsibility not militancy’.  Money was donated from all over the country in support of the action, and Jimmy notes the solidarity given by other shipyards.  This gave the workers hope, key to their continued, ultimately successful, resistance.  This action occurred during a climate of factory closure and minimal resistance, and Jimmy says, ‘workers, given correct leadership, knowledge and democratic structure, can win’.

Laxmiben then describes the Grunwick Strike 1976-1978, the first major strike action by an Asian community.  The women working in the factory decided to join a union due to their poor working conditions.  The presence of union action within the factory was not received well and tensions ultimately resulted in full-scale action, despite initial reluctance from some women.  The unions and community provided support at the picket line, and Laxmiben encourages us to remain strong during periods of struggle: ‘never get scared’.

Moving into the 1980s, Ann and Betty recount their experiences of a struggle against a governmental decision that changed the face of the UK, i.e. the Miners’ Strike, 1984 – 1985.  Women were vital to the strike, initially through organisation of soup kitchens, then through joining the picket line.  Women’s presence on the frontline was often not appreciated, but Ann and Betty defiantly (and rightfully) refused to back away from a fight that intimately affected them.   The extremity of the situation is brought into focus with one comment: ‘[it] brought a community together that hadn’t been together like that since the war, and it were a war, and we were fighting it’.  This struggle, supported through intense community backing and union involvement, changed the communities’ social dynamics, with women’s opportunities broadening as a result.  Ann and Betty hope that their ‘history will be chronicled’, and that they provide inspiration for other women.  Lastly, in a reflection of their old, defiant ways they tell us their old slogan was ‘agitate, educate and organise’.

Tony discusses the element of the Poll Tax Rebellion, 1989 – 1993, he was involved with: Tottenham Against the Poll Tax.  Again, the community played a vital role here, both through alerting neighbours to the bailiff’s approach, and through the onfidence of knowing everyone was ‘in it together’.  People in Tony’s community ended up losing their fear, e.g. of court summons, due to the levels of people going through the same processes – punitive measures lost their power.  This feeling of togetherness was enforced by the group’s participation in the infamous Trafalgar Square action, and while Tony notes the power of the riot, it was the mass non-payment that was key to the eventual success: ‘they can deal with riots but not millions of people not paying’.

Pauline played a key role in the Liverpool Dockers’ Strike, 1995 – 1998, despite living in London.  She feels that people not involved in a particular strike have more freedom to speak up and organise.  She organised a support group for the dockers, along with union assistance, and developed a relationship with Reclaim The Streets, a radical direct action group, who jointly organised a 3-day action leading to media coverage – and in turn more support and money.  Pauline notes the how differences between Reclaim The Streets and the Dockers’ Strike may have become a barrier to joint action, but that the will to work together proved more powerful.

Clara has worked as a cleaner on the London tubes since the 1990s.  Women in her position lived a precarious life, with awful working conditions, no sick pay and an ever-present threat of being fired; they were also not permitted to join a union.  Clara was instrumental in Winning the Living Wage, 2002-2007 (and ongoing); she and others worked hard to convinced their fellow cleaners to overcome their fear and fight together.  They convinced a union to let them join and started a strike with mass support, which led to the cleaners receiving the London Living Wage, changing these ladies’ lives enormously.  This was a huge achievement for the movement, and for Clara, who says, ‘I was told I was embarking on a mission impossible – but the mission became possible’.

Josh and Venus explain their involvement with Occupy (London), 2011-Present, with Josh reporting its location as vital in that it took their struggle to ‘the face of the oppressor’.  The TV screens at Occupy London permitted tangible proof of their involvement with a global movement.  Josh notes the importance of education and experimentation at the camps, in developing ideas for a more ‘potent democracy’.  Occupy was not just concerned with what people did not want, but looked for solutions, and Venus notes that Occupy ‘reinvigorated discussion at a time when it needed reinvigorating’.

Anti-cuts actions are increasing in number and scope as austerity hits ordinary people hard.  Two such groups focusing their energies here are Disabled People Against Cuts & UK Uncut, 2010-Present.  Andy, DPAC, feels that ‘old school’ campaigning strategies are no longer working, he advocates for civil disobedience as vital for progress, arguing that we must challenge power directly: ‘it has to be taken, it’s never given’.  Interestingly, Andy also notes the role of the media; DPAC have learned to use the media as a way of increasing visibility and support, by creating a ‘media hook’ in their actions.  Anna, UK Uncut, echoes Andy’s views that the current crisis requires direct action as a response, not just traditional means of protest.  While UK Uncut try to ensure their actions do not just remain the reserve of ‘hardcore activists’, Anna feels being taken out of your comfort zone is key: putting your body in the way to demonstrate your ‘anger and desperation’.

The importance of these films

Half a century of struggle and yet the films display significant similarities, in the feelings and broad motivations behind each of them –desires for justice and respect, and for certain standards of living.  Additionally, we notice that individuals do not fight solely for their own benefit, they do so for one-another and for the wider good.  Unions have played a major role in many of these struggles, but it is often communities that play the pivotal role in the success and/or sustainability of resistance.  We may have moved away from this in today’s modern world and, if so, perhaps we should reconnect with those around us – both geographically speaking and with those experiencing the same hardships as ourselves, whilst also supporting others in their fights.

Film, as a medium, permits an instant connection between the subject and the viewer, encouraging greater empathy and understanding of the subject’s experiences.  It is this understanding that can be transformed into action.  These films unlock a rich past, they make us question many stereotypes and show that regardless of our differences we all strive for a better future, and we all have within us the power to stand up and resist.  They provide an exciting, accessible, and often funny, way of learning about and from past and current struggles, and the themes that lie within.  Further, they demonstrate the power of collective organisation, something we would do well to remember in an age when governments are expanding and deepening their institutions of control.  Perhaps movements in the 21st Century have become connected in some ways at the expense of other, more tangible forms of solidarity and community.  We can learn a lot from these activists; their wisdom and experiences are essential to the movements of today, and tomorrow.

The films are available to view online by clicking here