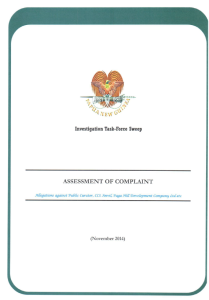 The International State Crime Initiative (ISCI) has published a report which raises serious questions over the integrity and rigour of a high-profile inquiry conducted by Papua New Guinea’s Task-Force Sweep.

According to ISCI, the Task-Force Sweep case-assessment contains startling errors of fact, law and method.

Dr Lasslett observes: ‘The errors were striking, Task-Force Sweep had entirely ignored its own basic practice and procedure. For example, company records weren’t checked despite being freely available, the agency described reports as tainted which it had clearly not properly read, and the assessment fundamentally distorts the Public Finance Management Act. All of these factors led Sweep into seismic error’.

ISCI argues that these flaws were not a mere result of carelessness or lack of resources.

‘Task-Force Sweep is highly literate in investigative procedure and the law, this assessment cant be put down to mere ignorance or inexperience’, Dr Lasslett maintains.  ‘It should also be noted our submission was made in 2012 when Task-Force Sweep was in receipt of a large block grant from the PNG government, why it waited until 2014 to respond is unclear’.

ISCI is calling on the government of Papua New Guinea to launch an arms-length, independent probe into Task-Force Sweep’s investigation of Mr Fridriksson and other associated entities.

‘If this investigation uncovers evidence of systemic failures within Task-Force Sweep’, Dr Lasslett claims, ‘the terms of reference should be broadened to allow a root and branch inquiry that evaluates Task-Force Sweep’s casework, managerial processes and financial accounting practices’.

ISCI is also calling on the government of Papua New Guinea to take all necessary steps to resurrect the Interim-Office Against Corruption with a view to introducing at the earliest possible opportunity the proposed Independent Commission Against Corruption.

Dr Lasslett concludes, ‘Papua New Guinea is blessed with courageous institutions and noteworthy examples of transparency, which to date have shone a powerful spotlight on grand corruption. However, citizens deserve a world-class prosecutorial service that can convert transparency into justice’.