The Untold Cost of Egypt’s Revolution 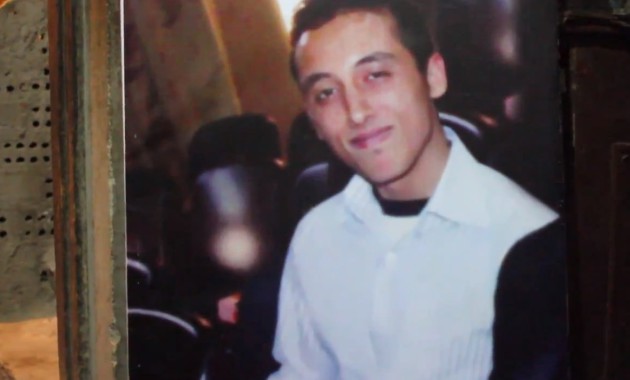 Philip Rizk is an activist and film-maker based in Cairo, Egypt. He is a member of the Mosireen media collective.

He told me to get off at the last kiosk on the highway that connects East with West Cairo. After the driver dropped me off, there was no one to be seen in the area. I walked down the concrete stairs by the side of the road. The stairs led me into the pit of a neighborhood named after a village that never was. There was Mahmoud, sitting in a coffee shop only meters away. He told me he had stood by the road for some time waiting for me but then had gotten cold and come down below. We walked together to his home, but slowly, because Mahmoud limped, and I wondered if he had ever made it up those makeshift steps or if he had merely said so out of politeness.

By the time we were finished with our interview I saw pain in his eyes. Earlier in the evening he had told me that he took painkillers, the effect of which lasted for two days, making it bearable for him to walk and work. Mahmoud works as a day laborer, a construction worker. Living meters away from the highway that leads past old Cairo and into the vast frontiers of the constant construction of “New” Cairo places him in the perfect location as a builder. But that is where his stroke of luck ends. His son Ahmed disappeared one year ago on the very day of my visit. During the course of the interview, Mahmoud told me that Ahmed limped the same way that he does.

I can only imagine the day Ahmed joined the battle against Central Security Forces and army soldiers who killed him that day outside the cabinet office on 17 December 2011. Ahmed had just returned to Cairo after losing his job in Alexandria two days earlier, like so many others. Egypt’s economy, increasingly dependent on foreign pleasure seekers, had taken a hard hit as the number of travelers dropped greatly. The people who oiled the tourism machine stayed home penniless. Ahmed went to the front lines near Tahrir Square in demand of a future. I imagine that his lack of familiarity with the space and the conditions of the battle lines put him at a disadvantage in the face of his armed, trained attackers. Ahmed tried to escape the unannounced onslaught, struggling with his cursed leg. The boy was not fast enough, and was shot, captured, beaten, tortured, and finally murdered. His captors threw his lifeless body into the Nile. Ahmed carried no form of identification that day and was added to the list of disappeared—those eaten by the revolution. But his parents sought after him until—through the maze of paperwork, lies, and legal dead ends—they found him. The clothes he was wearing that day in a plastic bag allowed them to identify his bloated, charred body.

Ahmed is one of the many martyrs who remain unnamed—Ahmed Mahmoud Mohamed Bekheit. The opposition of such a frail person against a mighty state apparatus is at the soul of this revolution—people against a system that is meant to represent us, decide the best for us, provide for our welfare, and yet does the exact opposite wherever possible.

Ahmed’s story, like that of so many fighters, remains unspoken—this one will forever hold his silence. With all the honesty I can muster, I write these feeble words, which he may have uttered but was never given a chance to.

The Paper that Buries a Murder

When Ahmed’s bereaved parents finally found their son’s body they were shocked. Mahmoud went to the deputy public prosecutor and lost all sense of control. “I cannot burry my son like this,” he said. He had just seen Ahmed’s body after thirty-six days of searching. This was not the body of a person who had drowned, as the officials at the morgue had told him. Mahmoud’s son was murdered. The bureaucrat told him to just burry his son because for seventeen days he had been “tortured.” He did not imply that for the past seventeen days he had been tortured under police custody, but rather used the Arabic expression evoking the idea that his son’s soul would remain tormented until receiving religious burial. The pretext of religious ritual would pave the way to clearing the members of the state apparatus of the crimes they had committed. The bureaucrat told Mahmoud to put his son at ease by burying his scorched and broken body and place his trust in the document that would prove the cause of his son’s death: the forensics report. One year later that document has still not appeared and the records of Ahmed’s body arriving at the police station on 22 December 2011 have disappeared, much like Ahmed did for those three weeks—criminally hidden from those who deserve to know.

Ahmed’s eleven-year-old brother Islam is the last member of his family to have seen him alive. On the morning of his murder Ahmed had said he was leaving to run an errand. He was well dressed, and told his little brother he would go alone. Islam looked into the lens and told the world, “no matter what, I will not rest until those who did this to my brother and to all the other martyrs are brought to justice. Until I am older, bear this in mind.” This revolution has shown a tendency to create new revolutionaries in the place of every fallen martyr.

These reflections on a video I filmed are only but an excerpt of the many details that are lost among the startling images captured and the breaking news written for immediate public consumption. These thoughts are an attempt to raise a matter of no triviality and that escapes the meta-narratives of revolution: the cost. Today the Muslim Brothers are attempting to build their hegemony of control. As this new political elite tries to erect its own empire of financial gain—justified by the “economic crisis” in a period of “instability”—the priceless cost that people pay is washed over in the process.

It is the most powerful gift one can give—in Ahmed’s case, as so often, without articulated intent. This is yet again, the cost of fighting for a freedom from the suppression performed today by the very men claiming to act in the name of the revolution, yet another set of criminals killing in the name of the state.