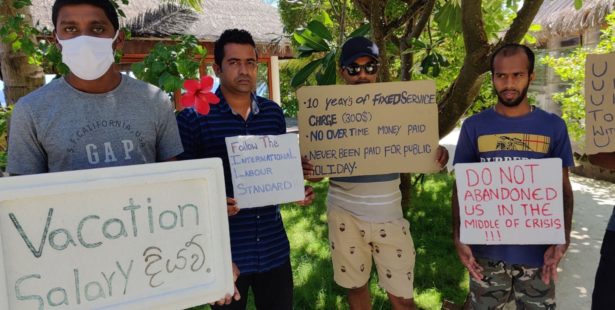 The overall response of the Maldivian government for COVID-19 has been remarkable. It was quick to close its borders with only a few positive cases and opted for lockdown with its first reported case of community spread. Furthermore, it was quick to convert several luxury resorts to quarantine facilities where not only the sick, but also direct contacts are quarantined for 14 days.

Despite these efforts, the country has extremely low testing capacity, lack of transparency despite the daily press conferences and poor management of the undocumented migrants. Additionally, the government needs to address the ensuing economic crisis, including loss of income and protection of worker rights.

The Republic of Maldives, known as the Maldives, is an island nation in the Indian ocean. With a population of 515,696 in 2018, its populace is dispersed across 188 islands. The Maldives was governed by the former president Maumoon Abdul Gayoom for 30 years, until its first multiparty presidential election in 2008, transforming it into a democratic country.

The current president is Ibrahim Mohamed Solih,  who was elected in 2018. The president appoints a cabinet of Ministers that is then approved by the Parliament. The Gross Domestic Product (GDP) per capita was $9,540 in 2017, health expenditure per capita was $1006. Health expenditure had actually decreased from 10.2% of GDP in 2016 to 9.03% in 2017.

The Health Protection Agency – an agency governed by the Ministry of Health, is responsible for leading health administration and planning for public health activities such as the response to the ongoing COVID-19 outbreak. The health care delivery system is organized into tiers across the nation, with primary care available in islands and tertiary care at urban level.

The private sector in the Maldives is distributed across islands with more services centred in the capital city. Looking at health sector indicatives for the latest available data, there were 4.3 beds per every 1,000 people (in 2009), 1 doctor and 4 midwives and nurses for the same number of people (in 2016). It is noteworthy that the number of doctors per every 1,000 people in 2016 was a decline from 3.1 doctors in 2015. On the bright side, 99% of the population had access to basic sanitation services as of 2017. Currently, there are 97 operational ventilators in the entire country. Thus, the Maldives has reached out to the WHO and other organizations for more ventilators in light of the pandemic.

In circumstances such as the current phase of the pandemic in the Maldives, it is agreed amongst global actors that extraordinary measures are necessary in the interest of public health. Some of the elements that make a lockdown justified are such that it is respectful of human dignity, neither arbitrary nor discriminatory in application, and limited to duration.

As governments have broad authority under international law to ban visitors, the government of Maldives suspended on-arrival visas for tourists, until further review. As a measure to ensure access to food, the government has assured continued supply of staple food items such as rice, flour, sugar etc., which are mainly imported from neighbouring countries including India and Bangladesh.

Similarly, as governments impose lockdowns, they are obligated to ensure healthcare and care-giving support to everyone. The island nations’ first COVID-19 fatality has sparked a resounding debate on government negligence in ensuring healthcare for those in monitoring facilities.

Moreover, there have been reports of overcrowded prisons, lacking adequate sanitary conditions and health care. Simultaneously, it appears that government also must address the situation of the caretakers and vulnerable children in the only residential care facility for children.

Social and Economic Rights of the Migrant population in the Maldives

While the capital – Male’ is often glorified as an unusual city with brightly painted houses, the reality is that it is one of the most densely populated cities in the world. Several low- and middle-income families and the most marginalized of the population are crammed into small spaces. Consequently, the COVID-19 outbreak has exacerbated the existing vulnerabilities, particularly amongst the migrant population in the Maldives.

Compromising 25% of the population, the plight of migrants living in crammed spaces has made it impossible for them to practice physical distancing. As a result, most of the active cases in the Maldives are seen amongst the migrant population. One news outlet reported that 95 migrants crammed into a single accommodation have all contracted COVID-19.

Beyond the immediate health impact of COVID-19 for this population, migrants are also susceptible to economic and social vulnerabilities. Despite the fact that migrants drive the country’s growth, the government has not yet addressed any policy measures to buffer the economic impacts of COVID-19 for migrants who are unable to work remotely, working at great personal and societal risk and hit the hardest due to forced no-pay leave by employers.

Several migrants have been fired, without financial support, and are left to face destitution. As a consequence, they are forced to beg for essentials such as food.

The most recent extension of the lockdown was largely a result of the need to find an immediate solution for the living situation amongst the migrant population, according to an agency of the Maldivian government. While the government has acknowledged that migrants are at high risk of contracting the virus and that more accommodation facilities are being established to relocate expatriate workers, it is not a justification of how migrants have been scapegoated.

The mere fact that their nationalities are publicly disclosed, together with some personal data, without protection for patient confidentiality worsens the existing xenophobia in the Maldives. Such actions have made room for the use of derogatory language in the press conferences.

Undoubtedly, the COVID-19 outbreak has exacerbated the existing economic and social vulnerabilities amongst Maldivian nationals. As a result of the previous governments’ reluctance to decentralise and invest in islands beyond Male’ has left people suffering to varying degrees.

One of the biggest issues is the housing disadvantage. While housing is a basic human right, it is the largest expenditure for people living in Male’ where most people cannot simply afford with their basic monthly income. Thus, the living situation for several Maldivian nationals was worsened by the increase in unemployment, with many of them experiencing homelessness in the midst of the pandemic.

While tourism industry in the Maldives contributes to a staggering contribution to the GDP directly and indirectly, the luxury resorts are withholding pay, regardless of the fact that they can afford to pay their hardworking staff. As a result, several families have had to move back to islands, where there is inadequate healthcare and education.

In response to this growing issue, the government has taken several measures. A hotline to report loss of employment has been established, with an allowance of MVR 5000 (US$ 324) which is insufficient for basic needs in Male’. Government officials also informed the public that there is not enough to aid the freelance workers.

Simultaneously, it has decided to cut pay to its some of its civil servants earning more than MVR15,000 (US$ 967) while political appointees, Ministers and Parliament Members are still receiving their full salaries and bonuses.

The government has tried to tackle the issue of tenants being evicted by advising landlords not to take such actions while creating an online payment portal for people to make donations for government agencies to assist people in need.

Meanwhile, it is expected that more civil servants will lose jobs as the government itself is running on its highest ever debt per GDP. To tackle debt crisis, the government in fact decided to monetize or print money of a package of MVR4.2 billion (US$ 311 million). This further amplifies foreseeable economic consequences including higher inflation as the Maldivian Rufiyaa is pegged to the US dollar.

Amidst all of the budget constraints, taxpayer money has been used to in allocate an allowance of US$11,1194 per month for the appointed High commissioner to the United Kingdom – which is a significant overcompensation.

Aminath Layana Ahmed is a final year BSc Global Health student, with a passion towards health care policies and migrants health and well being.