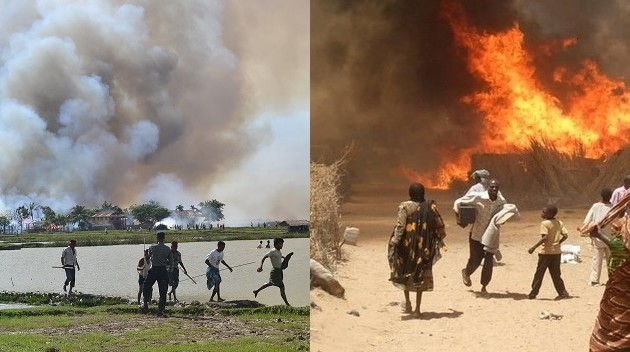 A recent report by ISCI found clear evidence that the Rohingya Muslim minority in Burma is suffering a concerted campaign of annihilation that amounts to genocide. As the former UN Special Rapporteur for Human Rights in the country wrote in the report’s foreword, “The Rohingya people are gradually being decimated.” At the same time, in Sudan, what many have described as genocide in Darfur, primarily against the Fur, Masalit, and Zaghawa tribes, is now into its 13th year, making it, according to former UN Resident and Humanitarian Coordinator for Sudan, Mukesh Kapila, the “world’s longest running genocide.”

This is happening now, in plain sight of the international community. Both situations are expected to deteriorate in coming months. The impending dry season in Burma will likely lead to hundreds of Rohingya drowning, as they did last year, as they tried to flee the country in flimsy, over-burdened boats, at the mercy of unscrupulous people-traffickers. And in Sudan, in addition to Darfur, genocidal violence has spread to the Nuba Mountains and Blue Nile state. Humanitarian catastrophe looms in these regions, and recent months have seen renewed escalation of violence in Darfur.

In the context of these urgent and unfolding tragedies, these two expert panel discussions will engage with the thorny question of what could and should and should not be done by external actors such as the UN to mitigate both situations. What can be learnt from past failures and successes? Can anything be done to bring an end to the worst atrocities? And how can future ones be prevented? Is it even realistic to hope prevention is possible? These are not easy questions. But with genocide again happening before our eyes, they demand careful and critical consideration.

Professor Mukesh Kapila CBE, Professor of Global Health and Humanitarian Affairs at Manchester University, and former UN Resident and Humanitarian Coordinator for Sudan. Mukesh’s memoir about his time in Darfur during the genocide in 2003-4, Against a Tide of Evil, was published in 2013. He is also Special Representative of the Aegis Trust, and Chair of Minority Rights Group International.

Professor Penny Green, Professor of Law and Globalisation, and ISCI Director, based at the School of Law, Queen Mary University of London. Penny recently led a team of ISCI researchers in conducting field work in Rakhine State, Myanmar. Their unprecedented research found clear evidence of an ongoing genocidal process in the country.

Dr Richard Cockett, journalist at The Economist, and author of books on Buma (Blood, Dreams and Gold: The Changing Face of Burma, 2015), and Sudan (Sudan: Darfur and the Failure of an African State, 2010).

Ahmed Hussain Adam, Visiting Fellow at the Cornell University’s Institute for African Development. Ahmed is a prominent Sudanese political and human rights activist from Darfur, and was one of the principal negotiators in various peace talks and consultations on the Darfur conflict, sponsored by the UN and African Union. He was previously a Lecturer in Public International Law at Al-Neelain University, Khartoum, Sudan, and a Visiting Scholar at Columbia’s Institute for the Study of Human Rights. He is currently writing a book on the Darfur genocide.

Dr Louise Wise, holds a PhD from the War Studies Department, King’s College London. Her thesis explored genocide in Sudan through the lens of Claudia Card’s concept of ‘social death’, and uncovered the colonial dynamics of genocide in the country. Her research involved extensive interviews with diaspora communities from Darfur and the Nuba Mountains. She is currently based at the International State Crime Initiative, Queen Mary University of London.