The Facts in the Ground: Archaeological resistance during Occupy Gezi 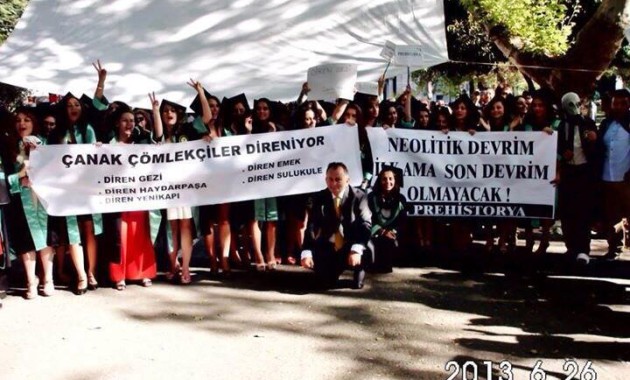 In Turkey, there appears to be a policy of illegal non-employment of archaeologists in order to ensure the non-recovery and non-documentation of politically-unacceptable cultural heritage.  That is to say that the state seems to violate its own law, which requires the employment of archaeologists for the assessment of development work and the performance of cultural heritage work. This violation prevents archaeologists from prohibiting culturally-destructive activity and excavating and recording material which is evidence of politically-inconvenient pasts.

So when repression provoked democratic resistance in Turkey earlier this year, archaeologists were on the front line as victims of government policy and police brutality and as advocates of real democracy. The first protester hospitalised at Gezi Park was an archaeology student, Hazar Berk Büyüktunca, and both unions and autonomously-organised platforms went to the occupations and squares to resist  out of professional responsibility.

Even before Occupy Gezi, archaeologists organised, and during the recent protests mass unemployment had made them particularly open to rebellion. Archeologists had produced collective petitions for employment and publicly questioned the government in social media campaigns as well as participating in the prohibited May Day march. Since then, they’ve established archaeological clusters and forums within the occupations’ tent cities, played the rough music of pots and pans and  coordinated resistance in cities’ central squares for ‘honour’ and ‘revenge’ on behalf of their profession.

The Turkish government has shown scant regard for the rule of law. Aside from its use of physical violence and threats of legal proceedings against peaceful protesters, and the attendant doctors, lawyers and journalists, it has ignored planning law or interfered in the planning process. When Istanbul’s cultural heritage committee rejected the government’s plans for Topçu Barracks, Prime Minister Recep Tayyip Erdoğan declared: ‘the decision of the Committee is not important for me and we reject the rejection of the committee; the project to build a shopping mall and hotel in the area of the park will continue’.

One of Erdoğan’s concessions to the protesters was that he would accept the court’s ruling but this was only a promise to respect the rule of law. A law already stacked in his favour because the national cultural heritage board had overturned the Istanbul cultural heritage committee’s ruling against the project. In an attempt to further establish “facts on the ground”, the government even appealed the separate ruling to pause development work until the work’s acceptability had been decided. The government also has a role in the appointment of senior judges so that such appeals, if they reach those heights, may find a favourable ear.

Even with the state’s legal and coercive powers, in order to realise these environmentally and culturally destructive projects, it must disregard its own laws on development and practice.

Legally, the municipality/state institution must employ experts appropriate for projects and sites, for example, restoration specialists and architects on renovation projects, material scientists and conservators on preservation projects, etc.  Accordingly, the Ministry of Culture and the municipality must employ expert archaeologists to assess and, therefore, license, limit or prohibit developments, and to manage thereafter any consequent excavation of archaeological remains.

Yet the contractors on the Taksim Square Pedestrianisation Project deliberately removed archaeological remains without expert supervision and so quickly that it became a fait accompli. The only archaeologists present at the Gezi Park development were amongst the protesters.

Facts in the Ground: Historical Precedents

Gezi Park is not the first site in Turkey to have suffered a cover-up like the one currently underway. During the four-year court case (2008-2012) to prove the illegality of the demolition of Sulukule, a thousand-year-old Roma neighbourhood in Istanbul, its demolition continued. By the time the original plan was finally declared illegal an insignificantly different plan had been drafted and the municipality completed the “new” project unopposed.

During the years 2009-2013 a near-simultaneous campaign against hydroelectric dam projects in Uzunçayır, Pembelik and the Jara Gola Çetu (an extension of Uzunçayır) in Turkey’s south-east, led communities to occupy critical sites, as happened in Gezi. With the assistance of the dam-builders themselves,  the Peace and Democracy Party (BDP) municipality in the region established a cultural heritage park in order to preserve the site, which was sacred to the local Alevi community. In response, the Sunni Justice and Development Party (AKP) government’s State Waterworks prosecuted the municipality in order to force the site’s destruction.

Since the state has some projects that are assessed and implemented by cultural heritage professionals, including the largest archaeological excavation in the world for the Yenikapı metro station, there appears to be a motive other than impatience for certain projects to be approved and conducted by people who are legally inappropriate.

Gezi Park was built over, and with gravestones from, the Armenian community’s Surp Hagop (or Pangaltı) cemetery. The state appears to have excluded archaeologists from the Topçu Barracks project in order to avoid the embarrassment it experienced during the Kasımpaşa road project (in Erdoğan’s home neighbourhood), where ‘gravestones belonging to Armenians were caught in the mechanical diggers’ teeth.’ As the graveyard lies beneath the park, development work might even exhume buried Armenians’ bones, which archaeologists would be best able to identify and about which archaeologists would be most difficult to silence.

Yet this seeming victory has merely led archaeologists to wonder how the government will get its way: will it “do a Munzur” – find a pliant judge to accept an appeal; or “do a Sulukule” – make cosmetic changes to the plan to bypass the ban, as they have done in the past? Archeologists, bypassed in the legal and cultural process of preservation, remain helpless  – their impact on the ground reduced, like that of the thousands around them, to frustrated protest.

Sam Hardy is an archaeologist who specialises in the destruction of cultural property and the trade in illicit antiquities in the Eastern Mediterranean. You can read more about his work on his blog.