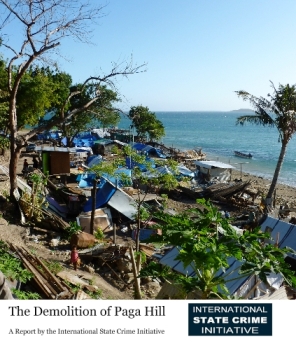 On 12 May 2012, one hundred police officers descended on the prominent Port Moresby landmark, Paga Hill. Armed with assault rifles, machetes and sticks, they had come to demolish one of the city’s oldest settlements. This forced eviction would make way for the Paga Hill Estate, an “exclusive” property development that promises to turn the 13.7 hectare site into “the icon of the new progressive Papua New Guinea”. Underpinning this controversial development is a web of companies which have featured in nine official inquiries into corruption and public mismanagement, and a Lands Department described by Papua New Guinea’s own Public Accounts Committee as an  “an arm of private enterprise”. This report chronicles the chequered history of Paga Hill Estate and the 12 May demolition of the Paga Hill Settlement.

The report, and its appendices, can be accessed here: