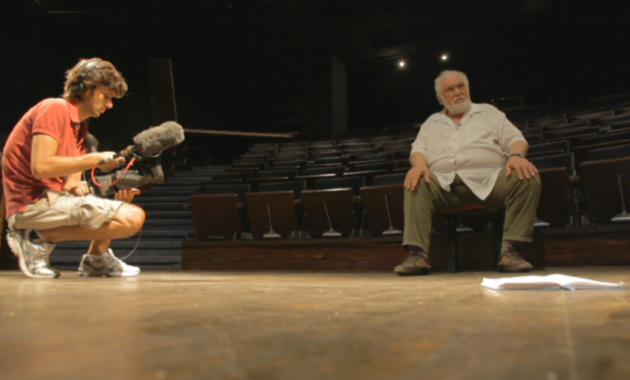 (From left to right: Ilias Spyrakis and Kostas Kazakos)

The Greek crisis, for many months, was the tip of the iceberg of a much bigger EU and global crisis. For the last three years, since May of 2010, the Greek state has received financial injections, loans broadly known as the ‘memorandums’, from the European Central Bank (E.C.B.), the European Commission (E.C.) and the International Monetary Fund (I.M.F.). The idea behind these loans is that the ECB, EC and IMF provide help to the Greek state for Greece to be able to get back on its feet. As a Greek, I know that these loans do not come without a price.

In my opinion the European Union has never been a union of solidarity and joint ownership. It is a union that is based and orientated according to the rules of the market; the rules of capital profit. So it is the unprivileged people of Greece that have had to shoulder the cost of Greece’s default, with money coming from annual taxes, radical cuts to both public and private sector salaries, cuts to the National Health System and of course cuts in the pensions bill. In contrast big Greek companies continue to operate tax free or refuse to pay their taxes.

In meeting the default demands of the EU, the Greek constitution has been subordinate to the memorandum treatment and its obligations.  Civil and especially labour rights are being annihilated. Whatever was gained through the social and class struggles of the last two centuries, since the Greek Revolution, is now ebbing away. Worse still we have seen a return to the political confusion and apathy of over forty years ago during Greece’s last coup d’etat in 1967 which reveals Greece’s true tragedy, a tragedy not of finances but of democracy.

In my film ‘Perspectives’ I wanted to juxtapose the financial oppression of Greece today with the political oppression of 40 years ago.  In order to do so the documentary focuses on Kostas Kazakos,  a prolific and popular stage director and actor, who is currently producing politically radical theatre in Greece. Mr Kazakos, who has been making political theatre during and since the coup, was the ideal character for me to link the two periods and the shared notion of oppression within a particular social context.

It is interesting to note that after the junta’s fall in 1974, post-coup officials, quite rightly, condemned the military coup as disgraceful and unrighteous. The coup d’état was indeed an example of political oppression and injustice. But that is only half the truth. The other half lies with the majority of the Greek population that, at the time, remained silent and bewildered. With every hundred that were imprisoned and tortured for their political stance, there were a hundred university students and workers that raised their voices against the oppression. These voices were were a minority, however, a minority that, I felt, paid off the shame of the whole population becoming a symbol of democracy that has now been hijacked by the current political opportunists.

Despite the ostentatious anger of some Greek people, the masses have yet to be transformed into a united force of servants speaking up against their masters  – although recent strikes suggest that this may be beginning to take place. Instead the last few years have formed a fog of confusion in the minds and the hearts of the Greek people, reflected for all to see in the latest election. During this process some Greeks preferred to remain ignorant and detach themselves from any kind of political activity, others accepted what was going on and went with the flow and many others, and their numbers are increasing, turned to social nationalism and through it are committing all sorts of atrocities against immigrants, refugees and any kind of minorities that do not fit into their reactionary, racist and psychotic agenda.

Fear, silence and ignorance are the worst enemies of democracy.  As Kazakos says in ‘Perspectives’: “It needs patience, consistency and hard activist work based on a collective spirit. But despite the awkward circumstances, not many of us do it; that is why things are delayed. Because the pioneers are still small in number. The slaves may have been many and yet only some -if not just a few- of them stand up brave”.

The times coming for the average Greek are not pleasant at all. My film catches this reality at the height of its realisation: ‘Perspectives’ was produced from June to September in 2012, a year of crucial general elections in Greece. As in 1967 silence and bewilderment reigned. People stood up and called attention to their grievances through mainstream political parties but at the same time demonstrated their confusion, desperation and indifference to politics. Kazakos and his theatre allowed me to create a lyrical and colourful depiction of this dramatic social reality, doing as his work does, distilling the noise of protest into one voice of the oppressed.

In many ways, however, the film is intended to be more than one individual’s story, and in this sense the film looks at the broader social meaning, extrapolated from Kazakos’ opinions. The main question that my film puts forward is this: Will only a small number of pioneers carry the weight of history on their shoulders again?

Only time may tell.

Alexander Papathanasiou is a documentary-maker based in London.  You can find out more about the film and see more of his work on his website.