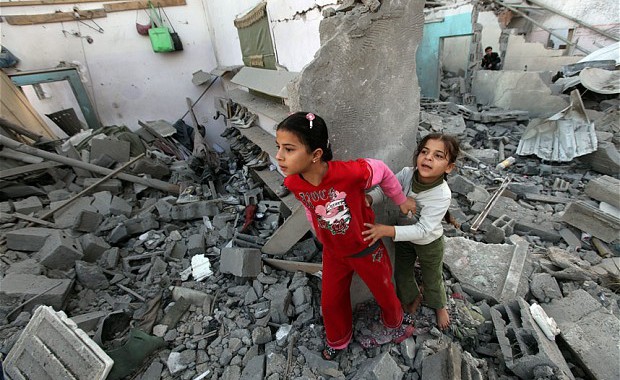 Israel’s latest attack on Gaza began on 14th November 2012 when Israel assassinated Hamas’s military commander, Ahmed Jabari; this was followed by seven days of aerial bombardment of Gaza leaving more than 150 Palestinians dead and causing large scale infrastructural damage. According to Israel’s Interior Minister, Eli Yishai, “the goal of the operation is to send Gaza back to the Middle Ages”(1). The perpetrators of these war crimes should be brought to justice. The latest conflict began with an act of aggression by Israel at a time when Hamas, the governing party in Gaza, was negotiating a permanent ceasefire.(2) Israel’s assassination of Jabari, triggering the conflict, amounts to extra judicial execution which is prohibited under international law. The United Nations Principles on the Effective Prevention and Investigation of Extra Legal, Arbitrary and Summary Executions emphasise that extrajudicial executions are never allowed, not even in time of war.(3) The UN Special Rapporteur on extra-judicial, summary, or arbitrary executions referred to the Israeli policy of extra judicial execution as a “grave human rights violation.”(4) Following Israel’s initial attack on 14th November, Hamas retaliated on 15th November by firing rockets across the border killing three Israeli civilians. Israel responded with further missile strikes in Gaza. Between 14th – 20th November, Israel carried out 1,643 missile strikes. 110 (now over 150) Palestinians have been killed including 25 children, 14 senior citizens and 12 women. 72% of the dead are civilians. 891 Palestinians have been wounded, including 277 children, 164 women and 62 senior citizens. Israel has bombarded 822 governmental and residential buildings in Gaza, of which 71 were completely destroyed, 187 sustained severe damage and 559 were partially damaged.(5) One airstrike by the Israel Defence Forces (IDF) killed nine members of the same family – five women and four children – the youngest was an 11 month old baby and the eldest was a 74 year old grandmother.(16) The Israeli Deputy Foreign Minister and former Ambassador to the US, Danny Ayalon, stated in an interview on 21 November: “I would say that most of the people that were hit in Gaza deserved it.”(7) The basic definition of war crimes is found in Article 147 of the Fourth Geneva Convention and includes wilfully killing civilians and causing unnecessary destruction of property. Those responsible for Israel’s atrocities in Gaza should be held to account for their war crimes. Israel’s latest offensive against Gaza is reminiscent of the ground invasion in 2008/9 which led to the death of more than 1,400 Palestinians (including 313 children) and 13 Israelis. After investigating that incident, a UN Fact Finding Mission (lead by Goldstone) found Israel to have breached its obligations under the Fourth Geneva Convention by targeting civilians.(8) Israel has also imposed an illegal economic blockade on Gaza since 2006. Israel’s restriction on food and medical supplies from entering Gaza is causing a humanitarian crisis and the UN Security Council has ordered Israel to lift the blockade.(9) The UN Special Rapporteur on Palestinian Human Rights, Richard Falk, described the blockade as a crime against humanity. Falk condemned the collective punishment of the Palestinians in Gaza as “a flagrant and massive violation of international humanitarian law as laid down in Article 33 of the Fourth Geneva Convention.” He has asked for “the International Criminal Court to investigate the situation, and determine whether the Israeli civilian leaders and military commanders responsible for the Gaza siege should be indicted and prosecuted for violations of international criminal law.”(10) The International Committee of the Red Cross consider the blockade to be illegal under international humanitarian law (11) and the Goldstone Report recommended that the matter be referred to the International Criminal Court if the situation does not improve.(12) International law contains mechanisms for prosecuting war criminals, providing there is the political will to do so. In 2009, a Palestinian minister wrote to the International Criminal Court (ICC) recognising its jurisdiction (13); the ICC refused to exercise jurisdiction on the basis that only a State may grant jurisdiction to the ICC and Palestine is not a State. If Palestine is successful in its attempt to become a non-member state at the UN, the ICC may then have jurisdiction to investigate Israel’s war crimes in Palestine. There may be legal complexities to the exercise of jurisdiction by the ICC due to the temporal nature of the court’s jurisdiction – Article 12.3 of the Rome Statute may provide a solution in granting jurisdiction on an ad hoc basis for specific incidents. The alternative would be for the UN Security Council to establish a special war crimes tribunal for Israel (the ICTY is a good precedent). For the time being, Israeli war criminals continue to act with impunity – but even the Israeli propaganda machine can’t keep international public opinion quiescent indefinitely in the face of behaviour like this.