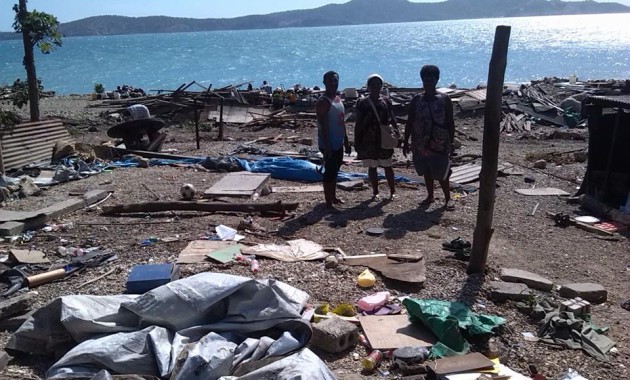 According to local residents over twenty homes were destroyed, leaving hundreds homeless, in a demolition exercise that was organised by the National Capital Distinct Commission (NCDC), with the aid of heavily armed police officers.

Also demolished during the exercise was a Seven Day Adventist Church, and historic WWII relics.

‘It is extraordinary, these people have endured so much, they have been bashed, terrorised, and intimidated by police, over a period of two years, now this’, ISCI’s Dr Kristian Lasslett observes.

‘This demolition is in clear violation of the UN guidance on development induced evictions and deserves to be condemned as such’.

Dr Lasslett continues, ‘at the very minimum the community would require 45 days notice, and a relocation strategy that clearly meets a number of basic human rights standards. And, of course, then there is the issue of the sacred cultural site and historical artefacts, which were destroyed during Tuesday’s demolition exercise’.

Dr Lasslett adds, ‘it shouldn’t be forgotten that the NCDC has conducted this demolition only after the community’s leader, Joe Moses, was forced into hiding when NCD police launched a man hunt against him, under what appears to be spurious charges’.

In response to the demolition, the International State Crime Initiative has produced an open letter signed by leading global human rights scholars, and PNG NGOs, calling on the national government to launch an independent inquiry into the Paga Hill episode.

According to Dr Lasslett, ‘the case of Paga Hill is emblematic of a broader trend, where local communities are facing forced evictions, implemented through violence, by actors whom have often obtained the land through land transactions with a question mark over them’.