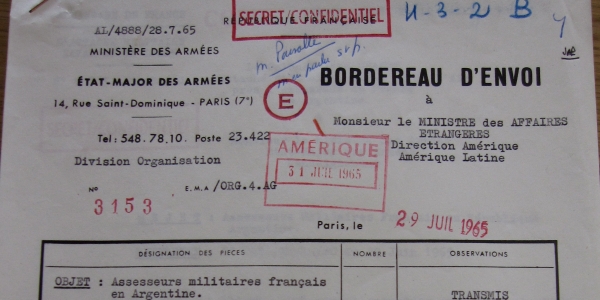 It is no secret that the Argentine military intentionally used the same methods of torture as the French army.[1] This is consistent with the argument that states can learn techniques of repression through their own experience but also from other states.[2] What is less familiar, however, is that France was directly implicated in transforming Argentine military and security professionals into official torturers, as some documents found in the Parisian diplomatic archives seem to suggest.[3] Indeed, France may have continued to be involved in situations that were contrary to human rights and considered as deviant by civil society right after the tragedy of its own Algerian war.[4]

As Grewcock explains, ‘State crime is often the by-product of complex political and socio-economic relationships and might be supported directly by other states.’[5] If some states are to be routinely condemned and blamed for their immediate and obvious use of torture on prisoners, the same condemnation should be extended to other states that not only use these techniques themselves but also export them abroad. Since the legal responsibility of a country involved in the training of torture techniques ends at the border of the importing country,[6] states—such as France—are able to alternate between the condemnation of governments on whose territory torture takes place and the facilitation of torture abroad.[7]

It follows that the institutionalisation of torture should be discussed in its international structural context.[8]  Since ‘there is no such thing as ‘‘THE’’ torturer,’[9] it appears that an adequate explanation of torture perpetration requires looking beyond the level of the torture chamber, or even of the states in which the torture is practiced, but also focusing attention on transnational perpetrators. This is not to argue that Argentine torture would not have been effective without ‘French training,’ but it appears to have been enhanced by it.[10] After all, ‘Torture is neither civilian nor military, nor is it specifically French [or Argentine]: it is a plague infecting our whole era.’[11] Yet, torture does not occur without ideological or logistical preparation and, from 1957 onwards, it seems that France performed an integral role in the architecture of the Argentine Dirty War.

Further investigation may explain the extent to which the ‘savoir-faire’ shared by the French and the Argentinians shaped the perception of the soldier, the enemy and the legal system, influencing the very specific application of torture in the Argentine ‘Dirty War.’ In order to do so, one will need to navigate between Argentina’s supposed willingness to confront its past and the proven desire of France to bury and deny its involvement.  France’s obfuscation would constitute another sadly ironic aberrance for a state that had so often, verbally at least, championed universal moral values and human rights.[12]