COVID-19 and State Crime in Mexico 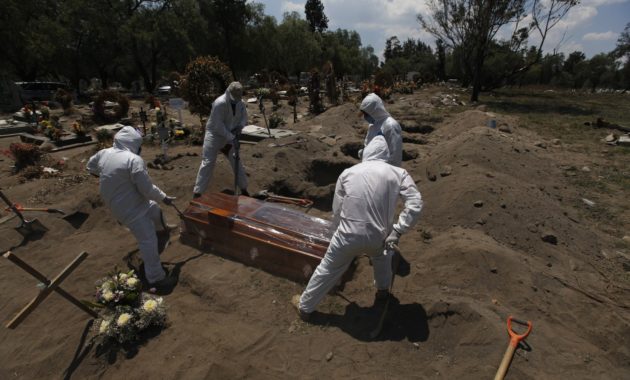 When in 2018, a populist, left-wing president Andrés Manuel López Obrador (commonly known as AMLO) came into office, the situation was looking quite optimistic. He ran on a platform of eliminating corruption, implementing ambitious social programmes and demilitarising the law enforcement in the country; issues that have plagued the country for decades. But according to the 2019 Human Rights Watch report, the country is still struggling with widespread human rights violations such as torture, enforced disappearances, military abuses, extrajudicial killings, and women’s rights abuses, just to name a few.

All of those problems have found themselves amplified in the light of the COVID-19 crisis.

With a population of 130 million, this federal presidential republic is the 10th most populated country in the world.  Even though it is among the 15 of the world’s largest economies, it’s GDP per capita in 2019 was 9,863 USD, and with the impact of the pandemic in combination with the drop in the US output, and measures to flatten the curve, the World Bank expects a significant contraction of Mexico’s economy.

Overview of the measures

In the beginning of the pandemic, some Mexican states had taken more rigorous approaches than others.  After a particularly slow start, with a lot of criticism against the president for spreading misinformation and downplaying the virus, the federal government has started to issue measures and guidelines. The Administrative Ruling and Technical Guidelines (the official federal paper on combatting COVID-19) called for a nation-wide lockdown from mid-March until the end of April (later prolonged to 31 of May), in which all non-essential activities were shut down, with special emphasis being put on the elderly, pregnant women, and people with chronic illnesses. However, it is specifically noted in the paper that the stay-at-home measure is voluntary and the paper fails to install an enforcement system. For reopening the economy, the Traffic Light System was implemented. The Red light urges people not to go out unless strictly necessary, the Orange light allows some limited non-essential business to continue, the Yellow light allows all work activities (but cautiously and with limitations), and the Green light allows all activities to continue, including schools.

Corruption in the healthcare system

The right to free health care is given to all Mexican citizens under Article 4 of the Constitution, but the ability of the government to fulfil that right has proven to be tragic. In 2019 the total estimated value of health spending per capita was 1154 USD, with only 2.5% of its GDP going to health care in 2020. In 2018, Mexico had 2.4 doctors, 2.9 nurses, and 1.0 beds per 1000 inhabitants.

One of the Government measures in combatting COVID-19 was ensuring that the Ministry of Health has sufficient funding for acquiring medical equipment. However, Mexico’s health care system is going through a crisis of massive proportions due to decades of systemic corruption in the previous regimes. Reports of the Auditoría Superior de la Federación from 2008 to 2019 show irregularities in the amount of a staggering $42,000 million MXN. This crisis is the result of hospitals being built in unsustainable and illogical places, abandoned and unfinished facilities (327 hospitals, clinics and health centres), medical equipment and medicine bought through ‘ghost’ companies with fake invoices. AMLO himself has exclaimed that his government was welcomed by a disaster in the system. The catastrophic state of the healthcare system is surely one of the reasons for the high mortality in the country, but it is also important to note the high number of patients who have died of COVID-19 and who have not been intubated, as well as the disparity between mortality of patients treated in public as opposed to private hospitals.

Furthermore, there have been reports of attacks of medical professionals, protests of health workers for lack of equipment, and most troublingly – lack of testing, which implies that there are a lot more cases than reported, especially with the use of the controversial Centinela model.

One of the more significant promises of the AMLO presidential campaign was to demilitarise law enforcement. Due to the country’s significant drug problem, high homicide rates and gang violence, the approach of previous administrations was to deploy military forces to deal with these issues. However, experience has shown that, not only does this approach not work, it actually increases the problem.  Between 2008 and 2017 approximately 230,000 people were murdered in Mexico, in 2019 the homicide rate went up by 2.7%, and there are more than 60,000 people disappeared and not found.

Despite all the evidence showing that the use of military forces amplifies the violations of human rights, AMLO‘s new militarized National Guard (NG) is placed in charge of implementation of COVID-19 government regulations. The NG was given the authority of surveillance over the hospitals as well as taking over the operation of some 80 civilian health facilities. With evidence of this same National Guard using excessive force and violating human rights with extrajudicial killings, forced disappearances and torture, one could question the logic of utilising them in a pandemic of global scale, where the poorest and least protected parts of Mexican society will be even more vulnerable.

In the light of COVID-19, police brutality in Mexico has increased. Giovanni Lopez, a 30-year-old bricklayer, was killed by the police for not wearing a mask, which sparked protests in cities across the country. This case is only one of many examples of the non-functioning police in Mexico.

The deployment of militarised forces to enforce COVID-19 regulations is not surprising in Mexico. The country has been suffering from over-militarisation for decades now. However, it is troubling to see this blend of civil and military life in a system all but ruined by mismanagement.

At the beginning of the pandemics, estimates were made showing that Mexico will be the country with the greatest impact on extreme poverty due to COVID-19. According to ECLAC, Mexico will have an increase of 4.8% in extreme poverty compared to the previous year, jumping from 11.1% to 15.9% of the population.

While the outcome of the pandemic is still uncertain, it is sure that, like in majority of countries, it has had a disproportionate impact on the poorest and most vulnerable members of society. Statistical analyses show that in municipalities where less than 20% of population live in poverty the mortality rate was 9.17%, whereas the mortality almost doubled (to 17.1%) in municipalities where over 80% of people live in poverty.  Data also show that the virus is more prevalent in people who have insurance linked to the ’working class’.

Furthermore, Mexico does not have public unemployment insurance, and just between mid-March and the beginning of April, 346,800 people lost their jobs. Even though AMLO has introduced some social programmes that benefit the elderly (like frontloading pension and disability payments by 8 months) and agricultural workers, none of them target the working class in the urban areas. Some other decisions were met with criticism; like the unwillingness to help larger businesses.  However, the Ministry of Economy granted loans to small and mid-size, as well as family businesses, with optional repayments.

However, probably a more significant problem is the informal work sector that 60% of Mexicans depend on for survival, who were unable to work due to COVID-19 related restrictions.  How efficient is the programme of one million microcredits (500,000 for the formal and 500,000 for the informal economy) in a country with such widespread economic inequality and in the midst of a crisis that could render 70 million people unable to afford their basic needs?

Femicides, gender-based violence and possible long-term effects due to COVID-19

With a rate of femicides rising by 7.7% from January to June compared to last year, it’s clear how the pandemic and the regulatory measures have affected women’s rights and lives in Mexico.

Social distancing measures have put women in additional danger of domestic abuse, which is already prevalent in the country, but now women are confined inside with their abusers, amplified by the stress of the situation and economic uncertainty, and insufficient access to help or justice. In April, approximately 11 women were murdered every 24 hours, and from mid-March to May, Mexico’s National Shelter Network received an increase of 80% in calls for help. The nightmare of these women was not helped by the fact that funding to women‘s help services was cut (by one third in the 2020 federal budget) to reallocate it to ’more pressing programmes’, and the suspension and slow functioning of the justice system during the pandemic.

Unpaid labour in the form of household chores, care for children, sick and the elderly, is widely normalized to be ’women’s work’ in Mexico. This means that during the pandemic women will be exposed to disproportionate amount of work (which could also mean caring for family members infected with COVID-19), including young girls, whom this misogynistic stereotyping can pull away from education leaving long term consequences for them, as well as gender inequality in the country.

The fair allocation of ventilators framework in Mexico did include a gender perspective, but there is still concern of accessibility to health care regarding issues related to reproductive health.

Although he might have genuinely had good intentions in the beginning, due to COVID-19, AMLO has found himself between two fires. He can continue criticising businesses which he will need if there is ever a chance to recuperate the economy or let the burden of economic distress be carried most heavily by the poorest, whom he vowed to protect. He can try to weed out corruption and implement ambitious social programmes with money that isn’t there or he can be called just another president in a row who confirms the status quo. One thing is clear: the response to the pandemic in Mexico was meek. There is no denying that poverty, corruption, militarisation, cartel and drug related violence, disappearances and femicides were very much present problems before the pandemic, but the situation has gotten even worse because of it, and was met with feeble measures.