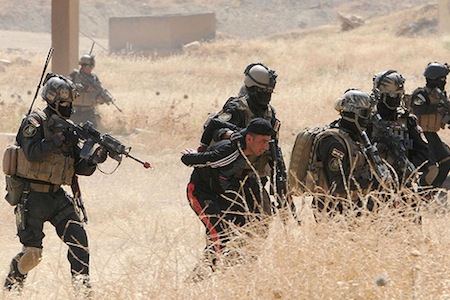 Ten years ago, in the aftermath of the invasion of Iraq and that country’s descent into anarchy, the United States began assisting, training, and equipping the Iraqi police.

In doing so, it was following a grand — and deeply morally unsettling — historical tradition. The United States had already been arming and training foreign police throughout the world for over eighty years — especially in Latin America. One of the major components in these foreign police programs is assisting in the creaton of heavily armed, paramilitary, SWAT-type police units, which left recipient nations with police forces with military mentalities deeply ingrained in their institutional culture.

In Iraq, this counterinsurgency-type training of police for military-style operations still scarrs the landscape ten years after the outbreak of war.

As a scholar of Latin America, especially Brazil during its military period, and a historical sociologist of U.S. assistance to Latin American police, I continue to be struck by the similarities between police training in Iraq between 2003 and 2013 and police training programs in Latin America from the 1950s through the 1980s — the era of Argentina’s “Dirty War” (making headlines again thanks to the new pope).

U.S. assistance to foreign police has been more harmful than positive, both to recipient nations and to the United States — in Afghanistan today, relations between U.S. advisors and the Afghan police gone well beyond the breaking point. It has failed to implant the rule of law, partially because American police advisors have had to break U.S. laws and conspired to hide those illegal activities from Congress and the press to keep police programs funded –even though much of such funding is black-booked for national security purposes anyway.

Of course, international police assistance is lucrative — greasing career mobility for academics who get government grants, for private contract corporations providing labor and material for police assistance, and for U.S. military and intelligence officials who “activate” such programs. Power, status, and income are derived from the business of police assistance. Ironically, those in the police assistance industry need not succeed at implementing law and order to be successful. In fact, a failure to implant even the roots of the rule of law has been the most consistent outcome of previous police assistance initiatives.

The sculptors of  Iraq’s counterinsurgency program, a quadrumvirate of  long-time U.S. government counterinsurgency promoters — Vice President Dick Cheney, Secretary of Defense Donald Rumsfeld, Colonel James Steele, and General (and now disgraced ex-CIA director) David Petraeus, a mentee of Steele in El Salvador — ignored this history.  In what was dubbed the “Salvadorization” of Iraq — which in the 1980s had been labeled,  the “Vietnamization” of El Salvador—made Steele and Petraeus the go-to men for creating a national commando force in Iraq  Interestingly, the U.S. had historically acted in Haiti, Nicaragua, the Dominican Republic, Germany, and Japan to break up national police organizations, seen as vulnerable to political manipulation by indigenous national leaders. Therefore, the Iraqi commando forces, initially dubbed “Special Police Commandos” (SPCs) and officially subordinated to Iraq’s Central Interior Ministry, represented a break with some prior traditions.

In any case, when police assistance is first initiated in a country, “old guard” police are usually discharged; thereafter there is a U-turn in which selected violent “old guard” police are reinserted into the police system. In Iraq, members of Saddam Hussein’s Ba’ath Party were first expelled from the Special Police Commando units and then selectively reinserted as social conflict increased in Iraq beyond the ability of U.S. and Iraqi internal security forces to control it.

An increasing inability to reduce conflict is usually followed by creating additional paramilitary forces — Iraq is now said to have at least twenty-seven brigades of Special Police Commandos, all recruited and trained by the United States  Yet even with — or more likely due to — an emphasis on commando paramilitary police, internal conflict and violence continue to increase. Rebel units and militias (the latter usually with Iraqi police collaboration) continue to challenge U.S.-linked internal security forces.

Trained in counterinsurgency, the SPCs — now designated “National Police” — have set up clandestine detention centers where torture has been regularly carried out. The tortures and atrocities that go on in those detention centers has been well-documented by The Guardian and by the Oregonian, in its series on the Oregon National Guard troops who saw Iraqis being tortured at an Iraqi prison in Baghdad and intervened to protect and medically treat victims. When the National Guardsmen’s actions were reported to senior U.S. officers, the guardsmen were ordered leave and keep what they had seen a secret. Evidence of torture and assassinations by the U.S.-assisted police and commando forces inevitably leak out, followed by U.S. government and military denials.

Increased armed security is launched to address a recipient country’s “insecurity,” with each move generating countermoves by violent actors. U.S. government and military officials discredit evidence of wrong-doing by U.S.-trained police — even as this continues to become public. Congressional hearings vet claims of police violence and, in some cases, accept such evidence, leading to the temporary shutdown of police and associated counterinsurgency assistance. But such assistance usually continues under different institutional rubrics, tightly concealed by the secrecy legitimized by “national security.” This formula applies just as well to Iraq during the ten years that the U.S. has been involved in creating ‘new’ Iraqi police forces, as it did for Latin America, especially between the 1960s and the end of the 1980s. Police assistance to an already divided society has resulted in deeper divisions within the population, as one sectarian Islamist group is played off against another.

As The Guardian documented, in Iraq “the long-term impact of [US] funding and arming [of the commando] paramilitary force was to unleash a deadly sectarian militia that terrorized the Sunni community and helped germinate a civil war that claimed tens of thousands of lives. At the height of that sectarian conflict, 3,000 bodies a month were strewn on the streets of Iraq.”

This is the status of Iraq after ten years of training and operational collaboration between Iraqi counterinsurgency forces and U.S. advisors. What lessons can be derived from the history of US assistance to other nations’ police? A country deemed important to US interests is said to be a experiencing a threat — it matters not if the threat is real or a WMD-like fabrication. Ideological justifications for providing police assistance are then promoted nationally and internationally.

Today,  Iraq remains in the throes of a low-intensity war and most people’s personal security is lacking. The majority of Iraqis distrust their police and prospects for democratic policing and the rule of law are grim. The damage to Iraq from ten years of American police assistance, and the lives ruined by torture at the hands of American-affiliated Iraqi police, has left its scar on victims and on U.S. legitimacy. Will the lessons of this history be remembered and applied?

*This piece was originally published by the History News Network on 19 March 2013.