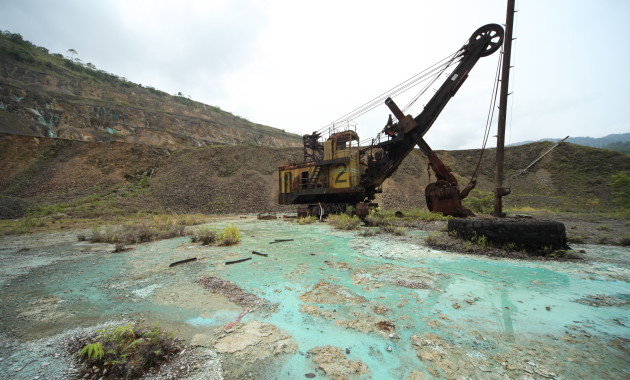 Once more Rio Tinto subsidiary Bougainville Copper Limited (BCL) is in the headlines, after the Autonomous Bougainville Government (ABG) passed transitional mining legislation that seemingly continues the momentum towards the re-opening of the Panguna mine.

The legislation has provoked strong condemnation from the landowning communities that will be directly impacted by the mine’s prospective reopening. They fear BCL’s return is now unstoppable.

Their opposition has been given powerful form in the Parakake Resolution, and in the poignant commentaries written by the Nasioi people’s own organic intellectuals, such as Chris Baria.

Bougainville’s President John Momis has dismissed this opposition on Radio Australia; he claims it is being stirred up by certain backdoor mining interests.

While it is hard to know whether a particular individual has or has not signed a MOU, as Momis claims, the vast majority of people in the mine affected areas have no interest whatsoever in these backdoor players. Their opposition is principled and rooted in a history that is yet to receive the public attention it thoroughly deserves, and which if recognised would provide essential context, missing from current debates.

At the bare minimum this history extends back to BCL’s so called ‘alleged’ involvement in PNGDF military operations that were conducted during 1989-90, after the mine was closed by landowning communities through a campaign of industrial sabotage (although this essential history goes further back still, to the mine’s construction and operation, including its seismic impact on land, environment and culture).

This remains an extremely emotive issue on the ground in the mine area, because these military operations were replete with some of the most atrocious war crimes imaginable. Indeed, they were so graphic, and so horrible, it would be insensitive to describe them here – as I have learnt the trauma survivors endure is foreboding and ever-present.

Nevertheless, respected regional commentators have cast doubt over these allegations levelled against BCL. For example the celebrated ANU scholar, Anthony Regan – who was contracted to draft the controversial mining law passed through Bougainville’s parliament last week – noted in 2003, ‘despite some claims to the contrary, there is as yet no credible evidence that BCL took any direct part in the [military] operations against the BRA [Bougainville Revolutionary Army]’. Regan maintains this position today, stating ‘credible evidence is yet to emerge. Perhaps such evidence will emerge one day, but I’m yet to see it’.

Regan is a lucid and perceptive commentator with a strong devotion to the region, so it is difficult to understand how he, and other regional experts, can maintain this position, when so much compelling evidence is now publicly available, and presented in a range of scholarly publications.

Nevertheless, given the serious doubt regional experts have cast over these allegations, it is perhaps understandable that the media has failed to give them much credence.

In that light it is worthwhile bearing witness, once more, to the robust empirical evidence charting BCL’s past conduct, hyperlinked where possible to the primary sources (it should be emphasised here, because there appears to be confusion, this evidence has primarily emerged from independent fieldwork, and is not in any way reliant on affidavits produced for a US class action against Rio Tinto).

It is incredible to think in light of this powerful oral testimony and documentary evidence from a range of highly credible sources (i.e. senior BCL managers, PNG government officials, PNGDF officers, BCL internal records), which are detailed in full here, that these accounts have failed to be included in the most recent public debate (although it is very much part of discussions at the village level). Indeed, certain journalists have implied the allegations against BCL are so tenuous, they have reached a point where they can ‘be put to rest’.

Of course at Panguna people need no reminding of BCL’s role, they still remember the hum of BCL trucks laden with PNGDF troops, coming down the road to torch their villages.

Yet in a curious twist Bougainville’s President has often said it is the communities in the mine-affected region who have specifically petitioned his office to have BCL returned as the mine’s preferred operator. The phrase ‘better the devil you know’ has been put on high rotation; sadly those who should know better often quote this phrase as if it is axiomatic at the village level.

It is not. In fact I have never come across a villager in the mine-affected region who uses this phrase in support of BCL’s return, indeed so raw are the scars that even the notional prospect of BCL’s return tends to elicit panic and near universal condemnation. Whoever presented this view to the President (we are yet to find out), was not accurately relaying the beliefs widely held within the mine affected communities.

Compounding the confusion, journalists rarely travel to these villages, relying instead on media releases and political statements. When they do, as the intrepid Antony Loewenstein discovered, a very different narrative emerges, one seared by a great yearning for cultural sovereignty and self-determination, underpinned by a painful history of dispossession and marginalisation.

Indeed, these are not a people who suffer from a ‘lack of understanding’, as certain leaders have claimed (coupled to this, it has also been implied rural communities lack the ‘expertise’ to determine what is in their own best interests). Villagers in the mine-affected area have a breathtakingly nuanced understanding of their past, and they fully recognise the complexity of the conjuncture they are currently faced with. It must also be said, these people are not dupes being manipulated by foreign activists (which is another condescending allegation circulating in the media); they have witnessed first-hand the destructive consequences of believing grandiose promises delivered by outsiders with ulterior motives, and as a result have an unwavering belief in the strength and vitality of their own wisdom (and quite rightly, too).

So it is time to pause for a moment, and truly listen to the voices of Panguna. It is time to bear witness to their suffering, and to hear their cries for justice. It is time to move beyond the sleek sound-bites supplied by governments and miners, and actually study the primary evidence and actually visit the communities, to allow them to speak for themselves. It is time for BCL and its parent company, Rio Tinto, to acknowledge the past and to atone without strings.

It is time for truth, it is time for justice, and it is time to respect the dignity of the land’s custodians; a dignity which so many, have sacrificed so much for.

Dr Lasslett’s book State Crime on the Margin’s of Empire: Rio Tinto, the War on Bougainville and Resistance to Mining is available via Pluto Press.

*A special thanks goes to Bougainvillean filmmaker Clive Porabou for the image used in this piece. Clive has tirelessly shared the voice of his people with audiences around the world through the medium of film.