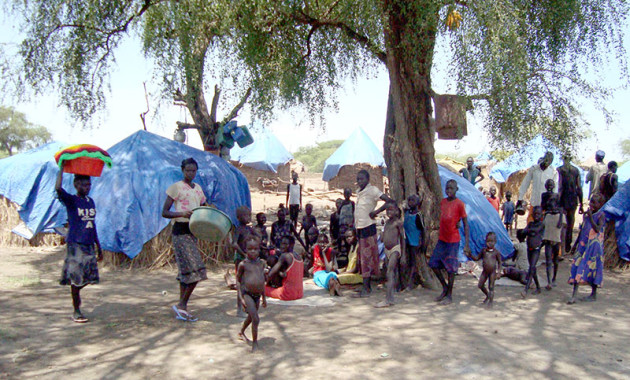 In Ethiopia, evidence suggests that the state has been involved in forced population movements and development-induced displacements, especially in the country’s vast peripheries. Today, Ethiopia’s governing coalition, the Ethiopian People’s Revolutionary Democratic Front (EPRDF), stands accused of violating the rights of the indigenous Anuak (or Anywaa) that comprise nearly 21% of the population in western Ethiopia’s Gambella region.

A 2012 HRW report focuses on systematic evictions of the Anuak people from their ancestral lands, and their supposedly ‘voluntary’ resettlement to new villages. In many communities, civilians were subjected to disproportionate use of military force, especially in remote areas. Government sources claim that the purpose of ‘villagisation’(sefera)  is to improve services in health care, education and water supply for the Anuak villagers and to boost their resilience against natural disasters and droughts. Despite ILO Convention 169, that requires the informed consent of indigenous communities over their relocation, adequate measures have not been taken, and organisations such as HRW, Cultural Survival or IDMC have described the evictions as clearly involuntary. Further, a concomitant of this state-orchestrated displacement is that the fertile and nutrient-rich lands of the Anuak are frequently relinquished to foreign agricultural investors – from Saudi Arabia or India – that grow food crops for their own domestic consumption.

Forced population movements and villagisation are not new in Ethiopia. In an attempt to ‘capture the peasantry’, the Marxist-Leninist Derg regime (1974-1987) ran resettlement programmes with the presumed objective of developing rural areas, such as Gambella or the central Arsi region. By clustering the scattered peasant population, the regime was trying to create a socialist utopia void of so-called rural ‘backwardness’. During a major famine that hit the country between 1984 and 1985, the ad hoc ‘emergency resettlement’ of the starving population exacerbated agricultural production loss and heightened food insecurity. In the following years, nearly 70% of Arsi’s inhabitants (mostly Oromo) were forcibly moved into planned villages, which formed new administrative units for controlling the peasantry. Contrary to the regime’s expectations, land collectivisation and villagisation schemes hampered rather than improved agricultural productivity. Due to ongoing insurgencies by the Tigrayan TPLF and the Eritrean EPLF in the north, the Derg’s policies towards large sections of the regions’ population featured gross human rights violations, ranging from forced evictions, withholding of food aid, burning of homesteads, and physical harassment, to forced labour for the erection of new settlements.

Although the Derg’s reforms of 1975 nationalised land and abolished the century-old practice of landlordism, they paved the way for new structural dependencies between the country’s periphery and the urban centres of power. One crucial aspect of this asymmetrical system was the compulsory commercialisation of agricultural produce through the state-owned Agricultural Marketing Corporation (AMC), which exposed smallholders even more directly to government interference than under imperial rule. Ironically, the socialist upheaval that deposed Emperor Haile Sellassie in 1974 resulted in the aggravation of urban-rural disparities, the destabilisation of rural economies, and precipitated the regime’s monopolisation of control over land.

Since Mengistu’s overthrow in 1991, several regions, including Gambella, Afar, Benishangul-Gumuz, SNNPR, and Somali, have again become sites of villagisation projects under the new EPRDF leadership. Now, as then, ‘development’ is the declared primary objective behind major re-structuring plans, yet with the distinctly capitalist goal of attracting foreign agricultural investment.

This paper argues that Ethiopian state policies in Gambella (and elsewhere) are tantamount to acts of ‘state crime’ on three levels:

First, through the construction of development narratives, the government has legitimised its policies as the ultima ratio for transforming the Anuak’s ‘traditional’ way of life within the framework of a ‘Growth and Transformation Plan’ (GTP). State crime often relies on the monopolisation of the discourse and media, which denounce opponents of government policies as ‘backward’ or ‘foreign’, thus spawning xenophobia and ethnic animosities. The country’s precarious civil and press freedom is emblematic for this political tutelage, leaving many communities disenchanted and with unaddressed grievances. By declaring Anuak-inhabited land ‘un-’ or ‘under-used’, the Ethiopian state sanctions compulsory measures against local agrarian communities and silences those that oppose this policy.

Second, displacing the Anuak, and imposing living conditions that systematically impoverish and disenfranchise their communities, constitutes the crime of ‘immiseration’. After reported massacres of Anuak in 2003 and 2004, in which an estimated 500 people were killed, Genocide Watch voiced concerns that the incidents might even constitute genocide. Although providing strong evidence of human rights violations, the report overplays the case for genocide and thus encumbers a detailed analysis of other criminal state activities. Forced evictions are not per se illegal under international law, but must follow certain internationally-recognised standards, such as proportionality, human rights and access to legal representation. Evidence suggests that these standards have not been met and that many Anuak were either forcibly urbanised or moved to new villages, far away from their former cultivation areas.

Third, once ‘cleared’, the former Anuak areas are leased to multinational corporations, such as Saudi Star or Karuturi Ltd. HRW claims that an estimated 42% of Gambella’s total 28,803 sq km is currently in the hands of such consortia. Corporate profiteering seems to function comfortably under, and in symbiosis with, government policies that officially condemn ‘land grabs’. State-corporate criminal cooperation of this kind is usually facilitated by both a coercive state apparatus (military, police), as well as the financial potency of private capital businesses. In 2011, Dessalegn Rahmato, an expert on Ethiopian land policy, referred to the EPRDF’s conduct in Gambella as an “ill-conceived” investment strategy that damages the eco-system, disregards indigenous rights, and ‘standardises’ traditionally diverse modes of land use. The moment of intent – inherent to all forms of organisational crime – goes beyond notions of malpractice or poor implementation. Too often, large-scale institutional crimes are dismissed as inconsequential offences as their harmful effects are less immediate and less personal than in street crime, but are mediated through the “control over institutions of power” (Michalowski & Kramer 2007, 205). Thus, the key feature of Ethiopian state crime is the centralisation of gains in the hands of the urban state elite, and the diversion of environmental, social and cultural costs onto the disadvantaged peasantry.

State power and crime necessarily generate resistances; these resistances can range from violent to non-violent, from hidden to open, and from verbal to physical protest in defiance of state authorities. Some villages (kebele) in Gambella have actively defied government calls for villagisation, as in the case of Terkudi. A recent study by IPSS (2014) shows how the village’s 200 inhabitants refused to comply with new government orders, having already been resettled unsuccessfully in the 1980s under the Derg. In other cases, people’s resistance was futile and they were forced to move, consequently not being allowed to return to their old homesteads since. Resistance is often the last resort for those facing a relentless state authority. The Anuak Justice Council and the Anywaa Survival Organisation, that advocate the cultural, political and indigenous rights of the Anuak, epitomise the social agency that local actors and civil society have vis-à-vis a seemingly omnipotent criminal state or state-corporate conglomerate.

While villagisation and resettlement programmes are officially deemed ‘voluntary’, Ethiopian authorities seem to coerce the local population and violate the Anuak’s human and indigenous rights. State-induced development programmes that promise enhanced health care, education, and a reliable electricity supply, have masked government efforts to re-structure traditional modes of production and endanger the livelihood of the Anuak in their customary settlement areas, such as river banks and forests. Interviews with victims, political activists, and village elders have corroborated these claims. Criminal government policies thus run the risk of alienating large segments of the peasantry, while at the same time generating state profits from foreign agricultural investments and monoculture plantations.