The Presidential leak, PNG’s bid for Bougainville Copper and the policy challenge ahead 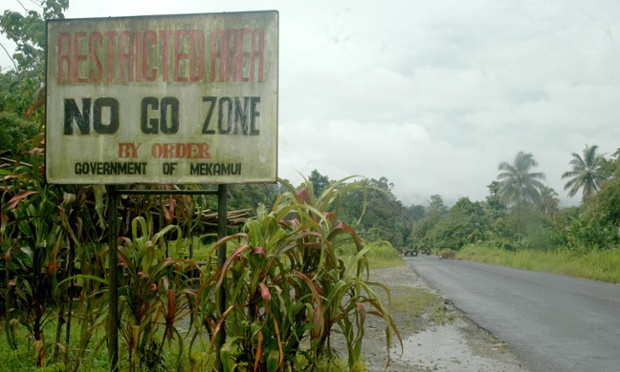 The Presidential leak and PNG’s bid for BCL

This proposal earned strong condemnation from the Autonomous Bougainville Government (ABG). With good reason, the Papua New Guinea state deployed brutal violence during the 1990s in an effort to keep Bougainville’s Panguna copper mine open (operated then by BCL), which at the time was a key revenue source for the Namaliu government.

This violence triggered a prolonged armed conflict, which was settled in 2001 through the Bougainville Peace Agreement. The agreement has devolved a range of powers to the Bougainville government including over mining. As a result, the ABG now has ultimate say over mining related issues.

In a provocative introduction Cochrane observes:

Cochrane adds by way of commentary, ‘the suggestion of conflict is a serious one, considering the large number of weapons still on the island and the highly factionalised population’.

The ABC report then quotes an ANU expert, in a way that implies this proposed purchase would give Papua New Guinea control over Panguna:’I think the main questions are why does the Government want to buy the mine …’.

Curiously Cochrane omits from his story arguably the most critical paragraph from the leaked letter, which confirms the  proposed purchase by Papua New Guinea would not give the O’Neill government any commanding right whatsoever over Bougainville’s natural resources.

President Momis makes this clear to Prime Minister O’Neill, stating: ‘I must also emphasise two points concerning the effect of the Bougainville Mining Act 2015. The first is that under section 367 of the Act, BCL now holds nothing other than an Exploration Licence [see endnote – K.L.] over the area of its former Special Mining Licence at Panguna’ (italics added).

The leaked letter then reveals:

That Licence [under the Mining Act] is take to have been granted on 8 September 2014, and has a term of 2 years. Section 112 provides that where 25 per cent or more of the shares of a company holding an Exploration Licence are transferred or otherwise dealt with within 24 months of the licence being granted, the Secretary to the ABG Mining Department must initiate action for cancellation of the licence.

President Momis adds, ‘these provisions are intended to provide protection for the ABG and for Bougainville more generally in such situations’.

Hopefully this legal appraisal should do much to counter concerns that Papua New Guinea can lawfully obtain a controlling stake in Bougainville’s natural resources. It is doubtful the O’Neill government would proceed down an illegal route, which would obviously be strongly opposed by Bougainville and all other states in the region.

Why the President hasn’t come out to calm the situation is unclear.

Previously, ABG officials have strategically stoked local anxieties over the Papua New Guinea state, to counter longstanding opposition to Rio Tinto’s return in Panguna. This intersects with a strongly held policy belief, that without mining at Panguna independence from Papua New Guinea will be unattainable.

According to New Dawn radio, the ABG Minister for Veteran Affairs, warned landowners of the doomsday situation that would follow were Bougainville unable to obtain fiscal viability before the independence referendum window closes:

… if the Bougainville Peace Agreement lapses in 2020 all their talk of Independence and landownership would be forfeited to the State of Papua New Guinea. Mr Sisito said when this happens all Bougainville leaders and Ex combatants will be held for treason as all agreements with PNG will become null and void. The Veterans Affairs Minister said that to avoid all these problems the Ex-combatants and landowners must agree to reopen the Panguna Copper mine.

However, in the current instance it is questionable whether the President is deploying fears over a Papua New Guinea takeover, to elicit support for Rio Tinto’s return. Especially in light of another critical statement in the leaked letter, which has received little attention in subsequent reporting.

As late as April last year, President Momis maintained that there was widespread landowner support for the reopening of Panguna. He told Radio New Zealand International, ‘landowners and me’ekamui are totally in support’. Coupled to this, he argued, there was a compelling business case for the project which would see significant revenues flow to the ABG before the referendum window closed in 2020.

However, in his letter to Peter O’Neill, the President signposts a notable shift in policy:

The situation since 2011 has changed. Commodity prices have dropped dramatically. The problems involved in getting consensus on the future of Panguna have added to sovereign risk assessment issues. As yet no announcement has been made of the outcome of the review Rio Tinto initiated into its investment in BCL in August 2014. If Rio’s decision is to divest itself of the equity then the ABG’s considered view is that it is most unlikely that any potential responsible developer will be able to find the $US6 billion to $US7 billion needed to reopen the mine.

As a result of these three factors, President Momis concludes, ‘it is therefore most unlikely the mine will reopen in the foreseeable future’.

While the ABG has always hedged its bets on whether Panguna would reopen, it appears that the government now concedes there is no clear social licence for a return to mining in Panguna, where heavy scars remain. Additionally, it has revised the optimistic economic predictions underpinning its business case. This new position sits more congruently with the evidence set out in empirical research conducted with the mine affected communities, and economic analysis produced by independent industry experts.

President Momis publicly confirmed the ABG policy shift to parliament in a speech delivered on 22 December 2015. He again reiterated ‘the ABG’s assessment now is that it’s quite likely that the Panguna mine will not re-open in the foreseeable future’.

As a result of this conclusion, he argues: ‘Rio also made very significant profits through BCL. Indeed, BCL used to be described as the jewel in Rio’s crown. In all these circumstances, if Rio decides to withdraw from BCL, they must take steps to do a proper mine closure. They must remedy the injustices done’.

This echoes an earlier position adopted by President Momis in 2005 when Bougainville Governor. Then he wrote to the US State Department’s legal adviser in support of a Bougainville class action against Rio Tinto, stating the ‘litigation has helped facilitate the [peace] process as it is viewed as another source of rectifying the historic injustices perpetrated against the people of Bougainville’. In an affidavit for the class action Momis went so far as to blame Rio Tinto for much of the violence and destruction inflicted on Bougainville by Papua New Guinea forces:

It is important to understand the significance of holding Rio Tinto responsible for its actions and the actions of the PNG government. At all times, Rio Tinto, through BCL, controlled the government’s actions on Bougainville … whenever government action was called for on Bougainville, BCL was the one that requested it.

For a period, President Momis stepped away from this adversarial position, arguing controversially the best way to remedy past injustices would be to actually reopen the mine under BCL-Rio Tinto auspices. The logic underpinning this reversal, was explained by the ABG’s legal adviser, ‘the compensation is essentially going to come from production, from profits’.

Of course, it was difficult for many within the mine affected communities to fathom how reopening the Panguna wound would serve to heal it. Instead, rural communities impacted by the mine have welcomed the slow recovery process being observed in their surrounding environment over the past two decades (although the road to recovery is a long one), and are now set upon the task of building an economic future that accords with their own ways and means.

Justice still strikes a chord though, many interviewed in the mine region wish BCL-Rio Tinto to atone for the violence and environmental harm they helped to inflict upon communities – and the expectation is atonement does not come with strings attached.

The challenges ahead for the ABG

The President’s recent policy shift, if enduring, may be a positive signal that the ABG’s stance is beginning to reflect strong local sentiment in the Panguna region.

However, it remains to be seen how much of a sea change the President’s remarks represent. One critical test for the ABG over the coming year will be confronting the high levels of corruption and mismanagement within government, signposted in Auditor General and Public Accounts Committee reporting.

This is no easy task. We have seen recently appointed Ministers and civil servants implicated in major corruption scandals, documented by the police and courts. Furthermore, the ABG has contracted advice and assistance – for a considerable sum – from a number of foreign concerns implicated in human rights abuses, and malfeasance.

Indeed, it is not clear whether there is actually anyone with a serious foothold within the ABG government, who has the commitment, resources and power to fight the rot.

It is equally worrying that a significant chunk of mainstream international commentary has presented the Panguna mine as a panacea for Bougainville’s challenges, without acknowledging the endemic problems of corruption, public mismanagement or indeed current commercial realities. While arguments have been made that a rapid return to mining would buoy the ABG fiscally – the questionable economics aside, this assumes a well administered state would carefully manage revenues and allocate them into the strategic areas of infrastructure, education, health and rural extension services. Current evidence suggests any revenues would buttress an increasingly clientalistic state, decimated by corruption.

In addition to the problem of corruption, there is an urgent need to strategically invest in local innovation and strengths, which draw upon grass roots productive systems and savvy in a sustainable fashion.

In the past, Bougainville’s President has been reluctant to consider alternative models, which he cast unkindly as ‘planting and selling tomatoes’. Similarly, the ABG’s legal adviser has also opined: ‘So agriculture, contrary to what a lot of outside observers think, is a difficult one … Outside commentators, especially from the activist community, who say there are obvious other ways of getting a sustainable economy in Bougainville have yet to establish the viability of any alternative model unfortunately’.

However, Papua New Guinea’s own fiscal crisis and lamentable performance with respect to service provision, is a salutary example for those who had pinned Bougainville’s future to large-scale extraction projects. Paul Flannigan, an ANU Visiting Fellow and Former Chief Advisor to the Australian Treasury – certainly not an activist in any conventional sense – recently remarked: ‘A more complex answer to what went wrong [in PNG] is based on the tendency of PNG’s political leaders to focus too much of its hopes on its resource sector rather than its people … Greater focus on improving the performance of the agriculture sector would do much more for the people of PNG than a focus on the resource sector’.

This broad advice was given with respect to Bougainville in 2008 by a number of development specialists, who warned ‘while some think that reopening the [Panguna] mine is possible, it is just as likely that any agreement would again collapse. In the interim, a strategy for economic recovery through agricultural production appears the most viable among the possibilities’.

With the window for the independence referendum now open, time is of the essence if the ABG is to conduct a major policy overhaul. Such an overhaul is critically needed if the government is to support the political aspirations of its constituents in the forthcoming vote and the economic aspirations of those so deeply injured by the actual existing practices of the extractive industries on Bougainville.

* By April 2015 BCL’s special mining lease and exploration licences had all lapsed (see http://portal.mra.gov.pg/Map/). The Mining Act 2015 reactivated BCL’s live rights over Panguna, by granting it a two year exploration licence, with caveats designed to prevent Rio Tinto from offloading its share of the company to an undesirable purchaser.