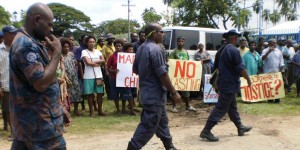 In Madang a case which aims to stop mine tailings from being dumped into the Astrolabe bay stands on a precipitous peak. Three landowners have withdrawn from the trial, while another seeks to be joined. Punctuating this court room drama are threats and under the table deals, as the mine operator attempts to lambast its project through to production.

It would seem that in the rush to begin production, (Metallurgical Corporation of China) MCC and their friends within government are wholly focused on seeing the mine come to fruition, regardless of future consequences. One thing they appear to forget, however, is that giants fall very easily in Papua New Guinea. This is particularly so when they fail to take note of the growing mood of discontent swelling at the grass-roots level.

If the case is indeed dismissed, then no doubt MCC and their supporters will be all smiles and hand-shakes. However, what they ignore is the fact that the law provides an important cathartic release for grievances, one that can be employed to discharge pressures that may have otherwise lead to more substantive social actions.

A province of Papua New Guinea that bares the scars of such actions is Bougainville. Like MCC, Bougainville Copper Limited (BCL) applied pressure to the Australian administration to see the mine progress through to production at a rapid pace. As a result, riot squads were dispatched to the island to intimidate women landowners who had opposed the mines construction. Despite local concerns, the mine began production in 1972.

Over the two decades of its operation the Panguna copper and gold mine was an extremely profitable venture. It delivered around K1 billion worth of revenue to Papua New Guinea. Nevertheless, the operations positive and negative impacts were channelled through a network of power at both a local, provincial and national level, which created new and divisive inequalities. The sum result was that poorer communities living in the mountainous areas around the mining operation faced land shortages, lack of income generating opportunities and an environmental catastrophe.

In August 1987 when Francis Ona and Perpetua Serero won election to the executive of the Panguna Landowners Association (PLA) these frustrations were given a new and articulate voice. They were adamant, that the mine had caused social divisions and environmental destruction, thus the only logical solution was to close it down and compensate the communities who had suffered loss.

At a meeting in April 1988, the PLAs secretary, Francis Ona, announced: All we want is to close the mine. When the company responded with the offer of a public works program, Francis Ona stated we the landowners will close the mine we are not worried about money. Money is something nothing. Perpetua Serero, the PLAs Chairperson, explained further, one of our major concerns is pollution money is of secondary consideration, compensation for these are insufficient.

Despite these protests of the landowners representative body, their ambition to see the mine peacefully closed failed. While BCLs management were sympathetic to villager concerns, they believed that the PLAs actions were simply part of an initiative to get more compensation, despite Ona and Sereros statements to the contrary. As a result, the landowners demands were treated as a tactic for extorting further benefits from the company, and not the genuine desires of a people pushed to the brink by thirty years of stunted development.

Matters came to a head in November 1988 when an independent company, contracted to review the mines social and environmental effects, claimed that BCL had generally done a good job. This flew in the face of the experience of local villagers.

Under orders to demonstrate the Papua New Guinea governments brute power, the Papua New Guinea Defence Force assaulted villages using mortars, attack helicopters and automatic rifles. Dozens died as a result of these attacks. Moreover, a blockade was placed around the island, which took the lives of three thousand civilians in 1990-91 alone.

Alienated by the force which the government had used against its own people, villagers in central Bougainville rallied behind the BRA and as a result they successfully expropriated BCL. Nevertheless, this came at the cost of heightened animosity on the island, which fuelled a decade long conflict whose death toll is estimated to be between ten and twenty thousand people.

There is a well known axiom, that those who fail to heed history, are destined to repeat its mistakes. Railroading the legitimate aspirations of landowners, dividing communities and corrupting government officials led Bougainville down a dark, decade long path. The bell now tolls loudly for MCC. Let us hope that the embers of discontent in Madang, if repressed, do not awaken a Genie that cannot be returned to its bottle.

* Dr Kristian Lasslett is a fellow at the International State Crime Initiative (www.statecrime.org) and a Lecturer in Criminology at the University of Ulster. The views expressed in this paper are his own.