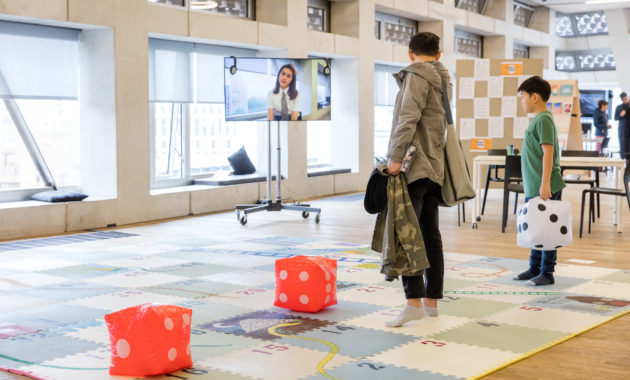 Isobel Roele and Amy Corcoran (July 2019)    When we first pitched our project to for Tate Exchange, an outreach and engagement platform run by Tate Modern, we had not quite considered the politics of using a Snakes & Ladders board to illustrate the perils, inequalities and indignities of immigration rules and processes. As soon as we began to put our project into action, we were confronted by the uncomfortable realisation that Snakes & Ladders – unlike the immigration system – is a game that, all players being equal, anyone can win.

The project came about after our university – Queen Mary University of London – invited academics to propose projects on the theme of “bodies in motion” for a week-long residency at Tate Modern. For an academic and a practising artist, both of whom write about law and art, the opportunity was too good to miss. We invited pupils from St Paul’s Way, a local school in Mile End, to help us decorate the tiles that would illustrate five “snake” and five “ladder” squares, and prepared a short presentation for them about some major immigration issues.

As we began to design our Snakes & Ladders board, three troubling implications of using a game to illustrate migration became unavoidably clear. First, we realised that people win board games, and were worried that affirming the success of the winners meant affirming the rules than enabled them to win; second, we realised that while the negative “snakes” sat neatly with our progressive politics, the positive “ladders” were more difficult to – ahem – square; and third, we feared that the whole enterprise of making migration into a game might end up trivialising migrant experience.

Our straight-forward idea had suddenly become much more complicated.

We hoped the game format would attract more people, particularly because games get people actively engaging, rather than passively looking on. Since the Snakes & Ladders format is so immediately recognisable, we used it to show rather than tell what we wanted to say. But the trouble with a game is that the result is a matter of chance. We wanted to avoid the consoling fiction that mere chance prevents the mostly white middle-class Londoners visiting Tate from standing in the shoes of, say, a Syrian refugee. Discriminatory immigration rules are the product of design, not circumstance.

So we tried to reflect this in the messages on our snake and ladder squares. We wanted the squares to reflect the asymmetries of immigration rules and processes. To avoid affirming the overall equality of the system, we designed our ladders to reveal the dark-side of privilege, and the small consolations available to people hurt by the system. One of the ladders carried the message “the authorities compensate you because they failed to recognise your Windrush-status”. Of course compensation was only due because the government had breached the rights of Windrush generation in the first place. The pupils’ design for the square was inspired by David Lammy MP’s “national day of shame” speech in the House of Commons, which captivated the class when we played them a clip during our presentation.

Another example was the ladder square, “Move on up! Your asylum claim has been accepted”. The pupils’ design subverts this apparently positive piece of news. In our presentation with the pupils, we explored the idea that the challenges facing asylum seekers don’t end when their claim is accepted. The state has an obligation to house asylum seekers and provide minimal living expenses. But once it formally recognises their refugee status, refugees are no longer entitled to these benefits and have 28 days to find a new home and a job to pay the bills. The pupils working on this square illustrated the practical time and expense of finding the deposit to rent a flat, or getting one’s qualifications recognised in the UK by juxtaposing the stability of a house with the looming threat of a ticking clock.

The final square posed the biggest difficulties. How could we avoid seeming to condone the system by celebrating a player’s victory? In what sense could someone who had survived the indignities expressed on the preceding ten squares be said to “win”? In practice, visitors tended to play the game in pairs. This meant that one player’s win was their friend, sibling or parent’s loss, illustrating a fundamental and unpalatable truth about immigration: that we who live comfortable lives in late capitalist societies enjoy our privileges at others’ expense. We also strategically placed our longest snake right at the end of the board. Players in sight of the finish line were often dismayed at being sent back to the beginning down a snake that bore a striking resemblance to Donald Trump.

But this did not solve the problem of the message for our final square. In the end, we hit on the phrase “bon voyage”. This was only partly a nod-and-a-wink to Brexit; it also contained the idea that in getting to the end of the board, players were embarking on a journey, rather than finishing one. It was entirely fitting, then, that players at the end of the board came face to face with the door to the screening room of Migrate Journey, a short film by Nurull Islam of Mile End Community Project, giving voice to migrants to the East End of London, who each told the story of “my great journey”. 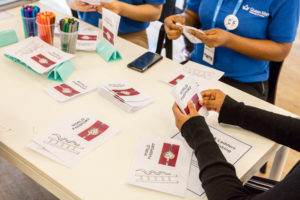 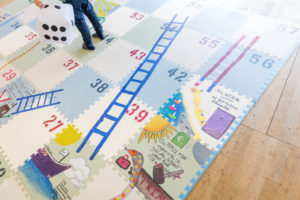 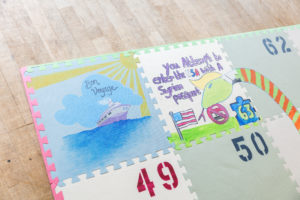 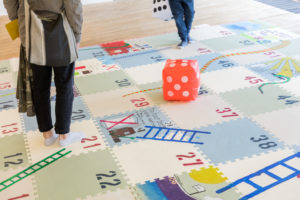