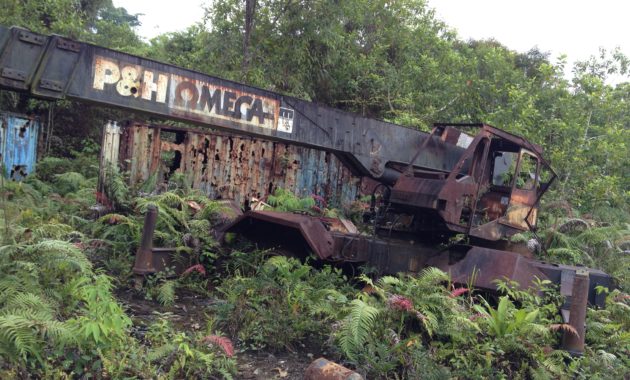 Bougainville Copper Limited is back in the headlines.

The proposed reopening of Panguna has been framed by senior politicians as the only viable solution to Bougainville’s political and economic challenges.

President Momis’ response to a question submitted by Radio New Zealand International on the reopening of Panguna, is indicative of ABG policy in this respect. Momis replied:

We have a timeline to meet. And unfortunately agriculture, fisheries, and other things just won’t enable us to meet those timelines. Mining is the only thing that will generate so much revenue to assist the government to provide services and help to develop capacity to handle the new public service powers.

In an earlier interview with SBS, Momis argued ‘the vast majority of Bougainvilleans, I would say over 97%, want the [Panguna] mine to be open’.

Bougainville’s new Vice President – formerly Director of the Office of Panguna Negotiations –  is reported to have adopted a similar stance in a recent statement to the press:

The Vice President is also quoted as saying ‘we need Panguna to finance independence for Bougainville’.

Nevertheless, an examination of the often difficult to access reporting on potential development strategies for Bougainville, reveals something of a broad consensus. The island needs diversified industries, with a strong rump of attention devoted to agriculture. With a young and able workforce, this make sense.

One only needs to face westwards from Bougainville, to find a cautionary example of what happens when agriculture is ignored, and all the policy eggs are placed in the extractive basket.

Also, agriculture is one tract of development that can leave industry in local hands, lessening the risk of exploitative relationships, or capital flight overseas.

Of course, agriculture is not the only option. Fisheries and tourism, have also been pointed to as fertile future tracts for potential economic development.

Another notable point of consensus is Panguna’s high risk status, which has dim prospect of producing considerable returns in the foreseeable future. Of course, few development specialists dismiss mining entirely – but its role is primarily one of a potential revenue generator at a later point of time, once central economic and governance pillars have been erected.

What is also interesting to observe is that the available survey data – see Table 1 below –  suggests many Bougainvilleans agree with the recommendations of development specialists; they see in the rush towards large-scale mining much false hope, and believe a stable, prosperous future will be secured through a diversified economic strategy built through participatory policy design.

To cite one example. In 2013 a peace and development analysis (PDA) was conducted under the leadership of the UNDP. It is described as a ‘collaborative effort of the Autonomous Bougainville Government (ABG), the UN in Papua New Guinea through the UN Development Programme (UNDP) and its office in Bougainville, Interpeace’.

The joint-project  involved interviews with 1100 people across Bougainville.

A discussion paper shared the study’s preliminary findings. Published in 2014, it states:

There is a broad popular perception that the ABG in its focus on the Panguna mine has largely neglected other sectors, such as tourism or alluvial mining, but especially agriculture which provides the livelihood for most Bougainvilleans. Not surprisingly, there is considerable interest among Bougainvilleans for the smaller scale, slower development path.

It adds, ‘as the Panguna mine shows, a big stone in a small pond has big ripple effects everywhere’.

The far more important finding however is that Bougainvilleans are not in a position to develop an informed opinion and make an informed choice [over Panguna’s reopening] … most Bougainvilleans have no access to detailed information from a source they trust, such as how long it would take and how much it would cost for the mine to be re-opened, what the projections are of the revenue it is likely to generate (reportedly such projection are available, but not widely known or easily accessible), what share of that revenue can be realistically expected to stay in Bougainville, and how that would be shared. Nor do they have enough trustworthy information about what the environmental impacts might be with today’s technology and knowledge.

The report adds, similar to the earlier draft: ‘There is certainly a strong strand of opinion among Bougainvilleans in favor of the “small is beautiful” vision’.

Late in 2014 – six months after the UNDP/ABG findings were to hand – Jubilee Australia** published a report based on interviews and focus groups conducted in the mine lease area with 82 participants. It draws conclusions sympathetic to the UNDP/ABG study.

Although, perhaps not surprisingly, given that the Jubilee report focuses on the mine lease area, it documented much higher levels of opposition to Panguna’s reopening, and a strong inclination towards justice and healing first, and a focusing of energies on sustainable forms of development.

President Momis rejected Jubilee’s report. He told the ABC, ‘the overwhelming response [on Bougainville] is support for reopening the mine’. Momis argued, this was especially the case in the mine impacted areas: ‘In the public consultations with Panguna mine lease landowners, many stated explicitly their view that Bougainville’s best hope of achieving the kind of fiscal self-reliance needed for either real autonomy or independence lies in mining’.

Echoing the President’s line, ANU academic Joanne Wallis penned a sharp critique of Jubilee Australia, claiming the ABG had ‘conducted a long and inclusive consultation process with the affected landowners and wider society to establish whether they want the mine to reopen … Reports from these consultations indicate that the majority of Bougainvilleans do want to [sic] mine to reopen … Jubilee Australia has uncritically accepted the anti-mining voices of a small number of interview respondents’.

The available data, however, suggests a much higher level of popular scepticism towards Panguna’s reopening, and the benefits its might accrue locally, than is conceded by Wallis or President Momis.

Indeed, the  views coming from the interview data (see Table 1 below) collected by the UNDP, ABG and Jubilee Australia exhibit a strong strain of realism, that contrasts with the, at times, millenarian prophesy  being ascribed to the Panguna project by select policy makers and commentators.

Certainly, since 2010 policy statements issued by the ABG have suggested that the reopening of mine, will produce ample revenues for independent statehood, while providing the wealth needed to compensate victims of the mine, and repair damage to the ecosystem.

At times the promise of Panguna has reached fever pitch. A document produced by one ‘landowner association’, heavily relied upon by the ABG to rally support for its reopening objective, claims:

U-Vistract would blush at such bold claims.

Less credence has been given to the unfavourable global economic conditions, the considerable risk involved, the evidence of strong local opposition, foreseeable damage to the environment, or indeed the likely origins of an ‘angel’ investor who might come in and invest the billions required to reopen Panguna (and the pound of flesh they would want in return, for such a high-risk investment).

Also while BCL is now ‘the devil we own’ – what does this actually means. BCL holds little in the way of tangible mining assets, and may be heir to liabilities emerging from previous corporate actions (although BCL states in its 2016 annual report ‘the company is not aware of any liability being incurred under any environmental legislation’, and has previously discounted liability for war crimes committed by the PNGDF, using BCL logistic support).

Moreover, the ‘devil’ is something of a shell of its former self – it has no Managing Director, while three managers are being retained as consultants***. It also has to be questioned why a Prime Minister who was head of state when the PNG government committed some of the worst human rights abuses during the conflict, now enjoys an annual fee of K151,000 as a BCL Director, and indeed why BCL appointed another former politician as Director – with support from PM O’Neill and President Momis – who was found guilty of three misconduct charges by a Leadership Tribunal in 2007, and featured negatively in a Public Accounts Committee report for his involvement in the Konebada Petroleum Park Authority.

That aside, it ought to be noted, there is also strong consensus among both researchers and the grass-roots, on some of the more significant threats confronting any long-term economic strategy – and that centres on poor governance and corruption. Considerable evidence has been accumulated on grand corruption, mismanagement and irregular transactions inside the ABG, at levels which might be described as systematic; yet the issues remains unnervingly untouched.

To use two notable examples:

The damage of corruption and poor governance is not only the public funds squandered, it’s the cultures of graft and impunity that attach to such environments, which fosters policy stasis, mismanagement and popular distrust.

All of which raise tough questions, which likely require complex answers, best produced through healthy levels of debate, knowledge exchange, and collaboration.

Indeed, everyone with a strong devotion to Bougainville’s success, share one point of solidarity – a common desire to see the island thrive, with a new generation enjoying peace, culture, sovereignty, and opportunities that can see them realise their innate capacities. Differences exist on how this will best be achieved.

The reality is, Bougainville sits on the cusp of a referendum that will be one of the most significant votes in the region’s history. A clear set of strategies and implementing procedures are needed to facilitate the outcomes.

One would hope the ABG is currently producing, or indeed about to publish, a detailed white paper that will set out its post-referendum strategic goals, along with indicia of success, and implementing mechanisms, modelled against all the likely outcomes.

After all, it would seem perhaps the greatest threat to progress on Bougainville, would be to find out in 2019 that the Emperor has no clothes.

*Dr Kristian Lasslett is Director of the Institute for Research in Social Sciences, Ulster University, UK. He is the author of State Crime on the Margins of Empire: Rio Tinto, the War on Bougainville and Resistance to Mining

**The author is a member of Jubilee Australia’s Research Committee.