If truth be told: The revelations of a torturer to Brazil’s National Truth Commission 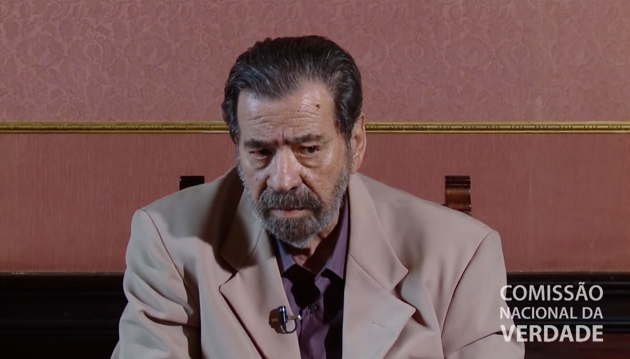 On 25 April 2014 retired army colonel Paulo Malhães was found dead, with signs of asphyxiation, after three men broke into his house in Nova Iguaçu, in Rio de Janeiro’s periphery. His death under suspicious circumstances drew the attention of the United Nations High Commissioner for Human Rights, Ravina Shamdasani, who urged for an immediate investigation into his death.

His death occurred a month after he testified before the National Truth Commission for several hours on March 25. During his statement, Malhães, 76, admitted having tortured political prisoners during Brazil’s 1964-85 military dictatorship and described the procedures employed specifically to prevent their bodies from ever being identified.

The National Truth Commission (Comissão Nacional da Verdade) was instituted in May 2012 to investigate cases of enforced disappearances, torture and persecution of political prisoners perpetrated by agents of the military regime. During its two years of existence, the National Truth Commission has faced a series of difficulties in persuading former agents of the repressive apparatus to testify. According to the Commission’s mandateit cannot force people to give statements. Because of this limitation it has heard accounts almost solely from former political prisoners.

Despite the Commission’s limitations, Paulo Malhães agreed to testify on 25 March. For the first time a former army officer admitted the existence of centres of torture and that he worked at one of them – the so-called “House Death” (Casa da Morte), also known as “Casa de Petrópolis”. He described how this torture centre located in Petrópolis, outside Rio Janeiro, was set up and run by military officers. His revelations are particularly disturbing because for the first time a military officer has admitted to directly conducting procedures specifically designed to prevent the bodies of political prisoners from being identified, before throwing them into rivers. He also admitted to having been given the task of hiding Rubens Paiva’s body. Rubens Paiva was one the most prominent victims of the repression as he was one of the first politicians to be purged by the military regime. Until April 1964, Rubens Paiva had worked as a Congressman of the Partido Trabalhista Brasileiro (PTB) (Labour Party) before having his legislative mandate canceled and his political rights suspended by the military regime.

Above all Malhães’ account confirms what recent studies of the Brazilian military regime claim: that torture was institutionalised within the state during the military regime and therefore should be considered state crime, understood “as human rights violations resulting from deviant behaviour committed, incited or condoned in pursuit of state organisational goals” (Green and Ward 2001). The concept of state crime includes but extends beyond legal categories of human rights abuse and international crime. Together with the evidence gathered by academic studies and accounts from victims of repressive regimes it is possible to affirm: 1) the existence of a systematic torture apparatus which had as its disposal public buildings, clandestine centres, modern and sophisticated equipment,  staff  (jailers, drivers, executors, typists, doctors), some of whom had been professionally trained, often in intuitions abroad, 2) that torture was an instrument of investigation and of social control and 3) that torture became so widespread that as a result no military leaders could claim not to have been aware of its existence. Therefore, torture during the Brazilian military regime can no longer be seen as a result of a loss of control or an excess committed on the part of individual military officers, as many of them have suggested in the past.