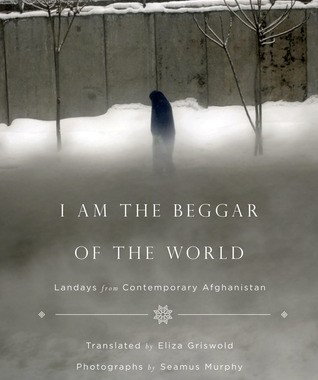 You sold me to an old man, father.

May God destroy your home, I was your daughter.

This traditional Afghan folk poem was often recited by the teenage poet Rahila Muska at a women’s literary group in Kabul. On a spring day in 2010, Rahila set herself on fire. She had just been viciously beaten by her brothers, who had discovered her writing original poems in this same form, the landay.

The writing and reading aloud of landays is a unique means of expressing the grief, rage, fury, pain, desire and humor experienced daily by the Pashtun women of Afghanistan. The form predates the Afghan state: it arrived thousands of years ago in Sanskrit, carried by early travellers and farmers. Formed from 9 syllables in the first line and 13 in the second, a landay must always end with a lilting “ma” or “ba” sound that is difficult to translate from the Pashto.

Through this poetic form, Afghan women today fiercely critique the injustices of patriarchal hegemony and those who wield the power within it. In a society that sees many women illiterate and hidden by carefully maintained restrictions on their daily freedoms, this artistic form is both an expression of resistance and of unity. Men may tell their own landays, but the vast majority of the voices speaking the poetry are female. It is in private and among women that they are predominantly shared aloud.”

When sisters sit together, they always praise their brothers.

When brothers sit together, they sell their sisters to others.

Eliza Griswold and Seamus Murphy talk about the Afghan landay at the Culture Project in New York City.

At “I am the beggar of the world: Folk Poems by the Pashtun Women of Afghanistan” (hosted by the Culture Project in partnership with Poetry magazine, the Pulitzer Center on Crisis Reporting and the Afghan Women’s Writing Project) a mixed New York audience was, for the first time, welcomed into this confidence. Having spent two years sourcing, hearing and translating the poems, journalist Eliza Griswold and film-maker Seamus Murphy hosted the evening. They dedicated the event to Rahila Muska’s memory – a tragic testament to civil society’s need for artistic freedom.

Griswold writes in the introduction to the June 2013 special landays issue of Poetry Magazine that, “I wanted to gather poems from women before the U.S. pulled out [of Afghanistan in 2014] and their voices were lost.” Over the course of the evening, however, the landay proved itself a dynamic art form. Poems first shared hundreds of years ago were read alongside newly penned couplets mentioning texting, Facebook and the American occupation. Often, single words in a landay had been adapted to reflect the changing injustices of life as an Afghan woman; in poem an inaccessible lover was called a “liar”, now he is  “American”.

How much simpler can love be?

Let’s get engaged now. Text me

You are guilty, I apologise

Griswold and Murphy’s project of “investigative poetry” has provided the voices of Afghanistan’s women with a platform, which stretches across the world. When the floor opened for questions at the Culture Project a Canadian woman explained how she had read the translated landays in Poetry magazine the night before. That very night she booked a flight to New York. Even in the context of the country’s uncertain future, the power and resonance of the Afghan oral tradition, coupled with the poems’ increasing presence online, suggests landays will continue to thrive as a form of political dissidence and artistic expression even after the West is no longer there to document it, as these are the voices of empowerment and resistance, the voices that effectively invalidate the Western image of a mute ghost in a blue burqa and the voices that, for centuries, have been committed to rendering the invisible in Afghan society visible.

Is there not one man here brave enough to see

how my untouched thighs burn the trousers off me?

Eleanor Stanford is a freelance journalist, currently studying at Columbia University Graduate School of Journalism. She has written for The Independent, The International Herald Tribune and local media on current affairs, social justice and the arts. Read more of her work here or follow her on Twitter @elucylinnet.

You can listen to a podcast of Eliza Griswold and Seamus Murphy talking about their work on the Afghan landay on the Pulitzer Center on Crisis Reporting here.