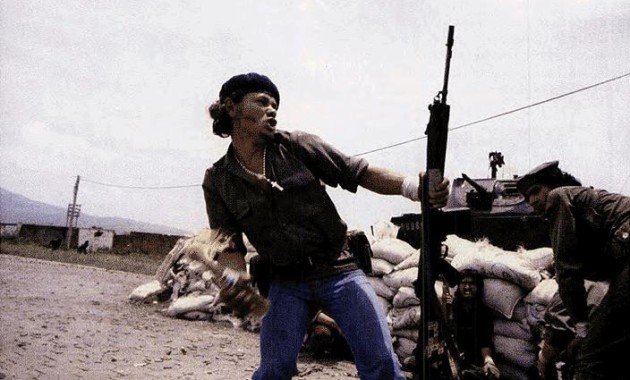 Documentary photography and photojournalism have long been an essential part of uncovering and raising awareness of conflicts and human rights violations.  Documentary photography serves as a fascinating – yet not unproblematic – elision between art and journalism.  Representation is the basis of documentary photography as both its goal and biggest danger; images can drive home the reality of war-torn countries or hidden people, but the photographer’s desire to represent his or her perception and the viewer’s desire look, to turn one’s gaze on others, can reinforce negative discourses or power hierarchies, no matter how well intentioned.

Rashmi Munikempana, an Indian artist, maintains the “Images as Resistance” blog.  The blog contains links to articles, online slideshows, book reviews, and exhibitions relating to the ways in which images can document war, human rights abuses, revolutions and protests and serve as tools of resistance.  The blog includes image collections ranging from the American Civil War to the Arab Spring.  One link, a mini-documentary and video essay called “Behind the Scenes,” by an Italian photojournalist, highlights the power of the photograph and the often problematic, constructed representations that come from a photographer’s lens.

One eminent photojournalist not mentioned in the “Images as Resistance” blog is Susan Meiselas, an American photographer known for her work on the 1979 Nicaraguan Revolution and in El Salvador, Chile, and the geo-cultural region of Kurdistan .  As shown in her 1991 documentary and 2004 photography exhibit about post-revolution Nicaragua, to Meiselas, a photograph is just the beginning of understanding and interrogation.  The role of the photographer as a player implicated in the images they create and events they represent is key to her work and philosophy.  In the following Youtube video, Meiselas describes these ideas (the video also shows the work of artists similar to hers):
Expanding the Circle