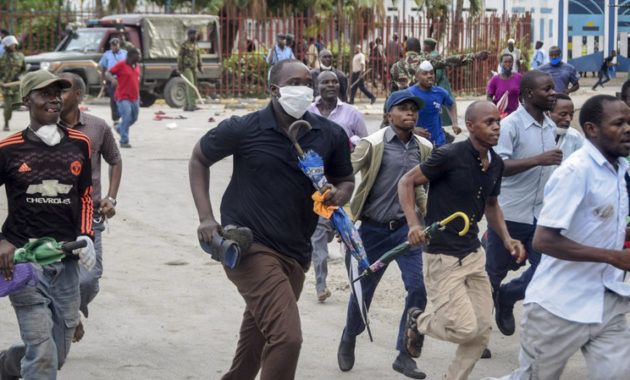 Since the beginning of the Covid-19 outbreak, Kenya’s central government took several restrictive measures that are having an impact on the liberty of movement and assembly. Due to the dangers involved, it is important to acknowledge that those measures are necessary.

However, the police brutality that followed the nationwide curfew is unnecessary and disproportionate and is especially worrying because it is coupled with a partial suspension of the court system. Moreover, police intimidation towards journalists is curtailing freedom of press and the population’s liberty.

Background of the existing health system

With a population of 53.3 million, Kenya is the third economy of East Africa with a GDP of 87.9 billion USD and a GDP per capita of 1,710 USD. However, the country spends only 4.8% of its GDP on health, a service provided by the governors since the 2010 devolution.

Elected in 2013 and then re-elected for a second term in 2017, President Uhuru Kenyatta is the Head of the State and the Head of Government.

Kenya comprises of 47 counties and its two levels of governance are  “inter-dependent and shall conduct their mutual relations on the basis of consultation and cooperation “. However, since the beginning of the Covid-19 pandemic,  governors have called for more support from the central government not least because 22 counties do not have any ICU facilities.

In  a country where 50% health is  delivered at by the public sector and 50% by private and faith-based facilities, only 518 ICU beds are available according to the Kenya Healthcare Federation and Critical Care Society (see here).

On April 28, 2020, Kenya reported 363 confirmed Covid-19 cases. Before then emergency measures had been introduced to contain and limit the spread of the disease.

Restrictive measures accompanied by the violation of civil and political rights.

On March 13, the President decided to suspend entry to non-residents and nationals, close the schools and places of worship, and encourage employees to work from home and limit the use of public transport.

Just a few days after this announcement, the Ministry of Health (MoH) released a statement following the advice of the National Emergency Response Committee on “precautionary measures”  such as the closing of  “all entertainment, bars and other social spaces” from 7 pm, the reduction of customer numbers in supermarkets and the restriction of visits in hospitals and correctional facilities. Moreover, the MoH reiterated that foreigners and nationals travelling from foreign countries should self-isolate and will be arrested and/or prosecuted for not complying.

Five days after the MoH guidelines, President Kenyatta addressed the nation. In line with the MoH, the President called on people to respect of the precautionary measures noted above but went a step further by implementing a daily curfew from 7 pm to 5am in the whole country through The Public Order Number 1 on the Coronavirus Pandemic.

In a second speech, on 25 April 2020, the President announced additional measures such as the “the cessation of movement into and out of the Nairobi Metropolitan Area and the Counties of Kilifi, Kwale and Mombasa” for the following next 21 days as these are the most impacted counties by the virus.

Testimonies suggest that the restrictions of movement have been followed by police brutality leading to several deaths.

Additionally, the president extended the daily curfew at the national level for 21 more days. The president also announced that some counties are having an increasing number of patients infected by the Covid-19 and declared that “if this worrying trend does not reverse, more stringent measures will be taken in consultation with the County Governments”.

The increasing number of patients is a legitimate reason for imposing restrictive measures. In themselves, these measures do not appear to constitute a violation of the freedom of movement and assembly since an exponential increase of the spread of the virus would constitute a public health disaster within a system that is already weak and overburdened.

Testimonies suggest, however, that the restrictions of movement have been followed by police brutality leading to several deaths. Moreover, the directive to suspend courts is worrying as the police have been accused of “arresting people and charging them with hefty fines which cannot be challenged in the court.”

Courts will be open only to hear urgent criminal and civil matters including sexual offences, which constitute 38.5% of criminal matters reported since the beginning of the curfew (see also here and here).

Simultaneously, freedom of press has been curtailed. A video on Twitter shows a police officer assaulting a journalist covering Covid-19 related news while a Kenyan human rights lawyer has asserted that “the government in Kenya has encumbered journalism, freedom of expression and the right to information”.

The government has tried to protect economic rights reducing the taxes of micro, small and medium enterprise but also the resident income tax. In addition, an amendment of a tax law permitted a tax relief for employees earning less than $280 USD a month.

However, in his first speech  the President did not present any measures intended to support employees in the informal sector, people who did not exactly fit within the description of short- and medium-term enterprises that benefit from several governmental grants. An estimated 82.7% of  jobs are in the informal sector.

The spread of the disease in overcrowded places, including Nairobi’s slums such as Kibera, would be disastrous.

It appeared that none of the first interventions focused on the poor and most vulnerable.

However, in his second speech, the President declared that funding will be released in order  to assist “the elderly, orphans and other vulnerable populations through cash-transfers.” He went on to urge property owners to waive or reduce monthly rent.

In order to mitigate economic risks and create jobs amongst the youth, the president recently announced that 26,148 workers will be recruited within informal settlements in order to be part of the National Hygiene Programme that aims to disinfect public surfaces in several counties. In addition, 4,048 tailors, also residents of those informal settlements ,will be hired for the mass production of masks.

Executive guidelines on the washing of hands with soap on a regular basis seems unrealistic if no water supply is provided by the government.

Even though funding and initiatives, such as the those cited above, are supposed to help the most vulnerable, the issue of  clean water and poor sanitation is still concerning. Consequently, executive guidelines on the washing of hands with soap on a regular basis seems unrealistic if no water supply is provided by the government. To this end, activists in Kibera call upon the State to respect their right to have clean water in this time of crisis.

In order to address this need, the UN team in Kenya partnered with the Central government to provide safe, clean and accessible water in informal settlements and placed handwashing points and distributed soap within the city of Nairobi. However more work needs to be done and the government should ensure that the most vulnerable and those marginalized have access to other basic rights such as healthcare, social security and food in this time of crisis.

*Sokona Sy is currently completing a MRes in Global Health Law and Governance at Queen Mary University of London.