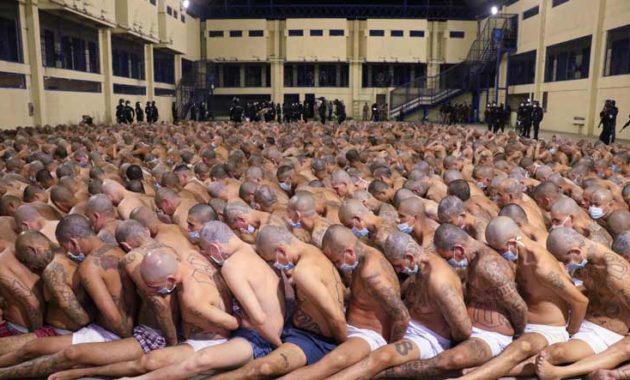 El Salvador has taken draconian public health measures to attempt to curb the spread of Covid-19 in order protect its weak health care system from being overwhelmed. Many of the measures only act as a show of power as the government exploits the chaos and uncertainty produced by the global pandemic in order to further its control of the population. Not only are these dubious measures furthering social control, they are in some instances hastening the spread of the virus and violating human rights.

El Salvador has a population of 6.4 million making it both the smallest and most heavily populated country in Central America.

Over the last two decades El Salvador has experienced very low levels of economic growth, with a 2.54 percent GDP growth in 2018 and an average of 2.3 percent in recent years. Its GDP growth is expected to be heavily impacted by COVID-19 with the World Bank estimating a 4.3 percent decline in GDP for 2020.

In 2018, a staggering 26 percent of the population in El Salvador still lived below the international poverty line, yet this represents a decrease of 17 percent since 2011. This decrease reflects the inclusive economic growth seen in El Salvador which resulted in it having the lowest inequality in the Central America region in 2018.  However, it is expected that informal and self-employed workers, 56 percent of the labour force, will be heavily affected by the COVID-19 pandemic and as a result may force many more people below the international poverty line.

In 2019 former mayor Nayib Bukele was elected as the president, the first in over 30 years who is not from one of the two parties associated with El Salvador’s 12-year civil war.

Since assuming presidency Bukele has caused controversy through his process of ‘purifying’ the government from FMLN (the left wing contingent of the previous two party system) policies and programmes. Furthermore observers have accused Bukele of organising a failed self-coup when Bukele called for a ”people’s uprising” in February 2020. This rapidly evolving and controversial political movement was in full swing when the global pandemic hit El Salvador. Since then the government has introduced a series of controversial measures.

In 2009 the healthcare system was reformed and is now provided through both the public and private sector. Those in employment are insured through a public insurance scheme, however high levels of informal work has resulted in nearly 80 percent of the population depending on the under-developed and under-funded National Health Service.

For a population of over 6 million there are only 30 public hospitals averaging 1.3 hospital beds for every 1000 people.  In 2018 total health expenditure accounted for 7.2 percent of GDP. However this only equates to 284 US Dollars per capita. As a result of the lack of resources and funding in combination with such a large percentage of the population relying on public health services; El Salvador has an overstretched and under delivering healthcare system.

Public health initiatives or the beginnings of authoritarianism?

On the 14th of March El Salvador declared a one month “state of emergency” and on the 15th of March, before any cases of COVID-19 were detected in El Salvador, a decree law was introduced to institute 15-day long restrictions on the constitutional rights to freedom of movement and peaceful assembly.

In a country where authoritarianism is a fresh memory the risk of this may be an even greater cause for concern than the pandemic itself.

Many human rights actors have expressed concern that Bukele may be using the extraordinary pandemic to further a militaristic agenda. In a country where authoritarianism is a fresh memory the risk of this may be an even greater cause for concern than the pandemic itself.

On the 21st of March with only 1 confirmed case of COVID-19 Bukele decreed a mandatory nationwide household quarantine for 30 days enforcing forced confinement in containment centres for those who breach these quarantine measure.

The decision to enforce nationwide quarantine is not a unique response to the COVID-19 pandemic and many other countries have acted similarly.

However, the decree orders the forced detainment of people breaching quarantine in containment centres which does not meet the public health protocols or standards for preventing transmission of COVID-19. As a result the government strategy both increases the risk of virus transmission amongst those contained, with over 1,200 people now placed in these centres.  people breaching quarantine rules in order to seek food, water or medication are most likely those living in poverty thus underscoring vulnerable groups of the population are disproportionately at risk.

The violation of human rights has not gone unnoticed and many NGOs have filed a petition of habeas corpus to attempt to limit further human rights violations by security forces.  The Supreme Court of Justice has issued numerous rulings in response and have established that authorities may not deprive people of their liberty if they fail to comply with quarantine orders. President Bukele has regarded this ruling as invalid.

More recently, President Bukele ordered a mandatory lockdown in prisons holding gang members. This was in response to a recent rise in murders between April 24 and 27th 2020. This lockdown has seen prisoners being held in inhumane conditions which may account to torture and degrading treatment.

The government in El Salvador have pledged to give $300 to over 1.5million households who work in the informal economy (as cleaners and street vendors for example).  This is to help ensure access to shelter, food and medication throughout the lockdown period.

However, the distribution of this subsidy has caused chaos and confusion. A large majority of those requiring this subsidy do not have bank accounts and as a result large crowds gathered seeking for advice on how to claim payments.