COVID-19 and State Crime in Uruguay 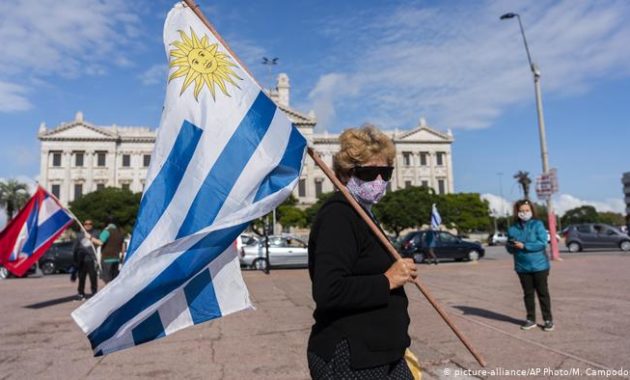 Uruguay has been praised for its efficient response to the COVID-19 pandemic. On 13 March 2020, President Luis Lacalle Pou, who had been in office for less than two weeks, declared a health emergency and introduced several measures to contain the spread of the virus. Much of the praise was in response to the government’s voluntary quarantine, its strong and universal healthcare system and the leading role given to scientists in the policymaking process. According to Giovanni Escalante, PAHO/WHO representative in Uruguay, the country was already in a good position to cope with the arrival of COVID-19 due to its demographic, geographic, economic and social characteristics.

Uruguay has a population of about 3.5 million people and is located on the south-eastern coast of South America. The country has a democratic republican form of government, with three independent branches – executive, legislative, and judicial – with Luis Lacalle Pou serving as the 42nd president. Uruguay has a GDP per capita of 16,190, and stands out in Latin America for being an egalitarian society with low levels of inequality and poverty. In light of the COVID-19 pandemic, Uruguay’s economy will go into recession and  there will be a significant depreciation of the peso and higher inflation which will have negative effects on employment, incomes and poverty.

Uruguay uses both private and public health care systems. Public health care provides free care to low-income patients which ensures that all citizens receive care. In 2017, the total expenditure on health as % of GDP was 9.30. Per 1,000 people,  Uruguay has 2.8 hospital beds, 5.079 physicians and 1.941 nurses and midwives. Due to low rates of inequality and poverty, and a well prepared health system, Paraguay was in a good position facing the pandemic compared to many of its neighbouring countries.

COVID-19 and the violation of civil and political rights

States are able to restrict some rights to protect public health under international human rights law, see for example the International Covenant on Civil and Political Rights, and have certain additional powers if a state of emergency threatens the life of the nation. The UN High Commissioner for Human Rights, Michelle Bachelet, has called on governments to ensure human rights are not violated under the guise of exceptional or emergency measures such as COVID-19. According to the ‘Siracuse Principles’, it is imperative that the restrictions taken by states are necessary and proportionate.

On 13 March 2020 President Luis Lacalle Pou, who had been in office for less than two weeks, moved swiftly and introduced a series of measures in response to COVID-19. This included closing Uruguay’s borders, active discouragement of public gatherings, wearing facemasks and closing schools. The government recommended working from home and to refrain from travelling. iThe Uruguayan government never implemented mandatory lockdowns but some shop owners chose to close their stores. Instead, the government opted for a voluntary policy, protecting the individual freedom of its inhabitants and counting on their good-will and cooperation. President Luis Lacalle Pou and his government have thus used individual freedom and civic rights as one of the main points of its strategy to contain the spread of the virus.

The government acted early in the pandemic and appointed a scientific advisory group to guide evidence-based decisions headed by top medical experts. Dr Jose Pedro Arcos, a member of the scientific advisory group, emphasised that “isolation measures taken immediately and voluntarily by the population together with the rapidly developed tests by virology and molecular biology scientists” are central factors in explaining Uruguay’s relative success. Uruguay started testing early and in large scale, and has one of the highest testing coverage in Latin America despite one of the lowest infection rates.

Violence against women and feminicides are recurring issues in Uruguay. In 2017, a bill was adopted and a national plan was set up to combat gender-based violence and protect women. However, Amnesty International reports that insufficient public funding has undermined the efficiency of the mechanisms put in place.

In the wake of the pandemic, the voluntary quarantine recommendation in Uruguay has been widely followed. As a result, women have found themselves trapped in their home with their potential abusers. During the pandemic, the government has taken initiative and strengthened helplines for domestic violence providing telephone guidance services.  During the two first months after the various measures were introduced to contain the virus, there has been a decrease in police reports filed for violence against women compared to the same period last year. However, there has been an increase of 80% of calls recorded on gender-based violence helplines reported by the National Institute of Women. This may imply that there are less reports filed due to the obstacles women face in light of the self-isolating recommendations put in place. However, it should be noted that the reasons for the decrease in reports filed remain unclear.

Thus, Uruguay’s restrictions in response to COVID-19 appears to be both necessary and proportionate. However, there is cause for concern for the effect the pandemic will have on women and girls in Uruguay. There is a lack of data in this regard as the pandemic is ongoing, but the government should monitor the development closely and implement additional measures to address the increase in violence.

The International Covenant for Economic, Social and Cultural Rights guarantees the right to social security and imposes an obligation on governments to take adequate measures to achieve their realisation. The same rights are ensured in Uruguay’s Constitution.

Uruguay is well-known for its welfare policies and efforts to develop its social security and health care systems. The country was therefore in a good position to handle the economic repercussions of the pandemic and emergency laws were quickly passed enabling a set of economic measures. One of the first measures was the creation of the Coronavirus Fund, financed mainly by a 20% reduction in the salaries of the better paid public officials, including the President, ministers and legislators. Additional resources have also been mobilized, including by resorting to contingent credit lines from other international financial institutions including the Inter-American Development Bank and the Andean Development Corporation. Further measures include, to name a few, relaxation of rules for claiming unemployment insurance and expanding sick leave benefits.

The measures taken by the President had an efficient impact on the country and Uruguayan maintain confidence in their government’s actions and decisions as well as in their institutions.

To sum up, thanks to the country’s strong and efficient institutions, Uruguay’s government appears to have been able to roll out necessary and proportionate measures in response to the COVID-19 crisis. However, the violence against women seems to have increased during the pandemic and requires close attention.