A Critical Introduction to Immigration and Asylum 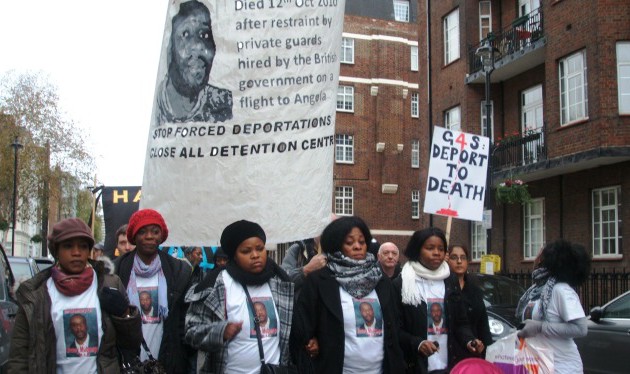 All countries practise immigration controls. But in an era of globalisation, the rich industrialised nations have colluded in the creation of a global system of migration controls which serves the interests of market states and global elites, while excluding the poor and persecuted from the culture of human rights. Some commentators characterise this as a global apartheid; The limitation of people’s freedom of movement based on nationality. At the same time, the need to migrate, for economic reasons or due to political persecution, has intensified under the impact of  free market ideology and the new imperialism, which is leading to resource-driven wars and the rise of authoritarian states, often working to secure the interests of multinationals.  The language of  ‘invasion’, ‘criminality’ and ‘threat’ that politicians and press deploy to demonise those who seek to migrate from  poorer regions of the world obscures the structured violence and harmful actions of state-created systems  of exclusion that undermine international law, as well as the humanitarian ethos of the 1951 Refugee Convention.

The initial priority of states, acting together in supranational global bodies, and through anti-trafficking and anti-smuggling initiatives, is to make it impossible for migrants to travel lawfully, through the introduction of visa controls and carrier sanctions, for instance, and to fortify borders through militarisation and surveillance, biometrics and e-borders. Managed migration strategies are designed to secure the economic hegemony of the most powerful states, through a skills-based points immigration system, for instance. This necessitates the design of policies that are rigid and inhumane, with many harmful consequences for migrants and refugees, particularly those who, forced to flee their countries, must find ever-more dangerous routes of travel. Serious harms also arise when the militarised border is re-created within a country. Immigration and asylum policy within a system of global managed migration is characterised by a politics of deterrence. This leads to the criminalisation of asylum seekers who arrive without papers, even though the Geneva Convention prohibits such, and the exclusion or marginalisation of asylum seekers and migrant workers from legal entitlements and access to the welfare state, leading to enforced destitution, immiseration and ill-health.  Financial benefits also accrue to private security companies which, profiting from human misery, gain contracts to run immigration removal centres, where detainees have fewer rights than those held in ordinary prisons. Private security escorts also gain contracts to enforce state deportation policies, and the use of excessive force has led to deaths. Another consequence of restrictive immigration and asylum policies is that migrants without papers are driven into an irregular situation, left vulnerable to super-exploitation, if not new forms of slavery, as part of a new underclass some commentators have called a Precariat.

Where limitations to people’s freedom of movement are linked to nationality, racism grows. Politicians and press have attacked the humanitarian principles of the Geneva Convention on Refugees and demonised migrants and refugees as ‘welfare scroungers’ and ‘illegal immigrants’ in search of an easy life. Racism can be institutional, leading to the creation of separate welfare and criminal justice systems for ‘foreigners’. It relies on stereotyping, as witnessed in refugee-determination procedures by the low level of acceptance rates for certain nationalities. Racism can also be popular, leading to a growth of racial violence against refugees and migrant workers. This is not always colour-coded – many migrant workers from eastern Europe are the victims of racist attacks.  This commonsense racism towards migrants can also be linked to the success of the electoral extreme right, particularly in Europe, though in recent years Islamophobia has been a more significant factor in far-right electoral breakthroughs.

The growth of the surveillance society is another by-product of immigration and asylum policy. As access to services (and rights) becomes subject to immigration status, there is a growth of internal controls and identity checks in all areas of life. In fact, citizenship rights, residence rights, family reunification rights, welfare rights are all being fundamentally reshaped in an era of globalisation. Increasingly, a lack of citizenship excludes migrants from the enjoyment of basichuman rights, bringing to mind Hannah Arendt’s observation that, despite the modern emphasis on human rights, “the moment human beings lacked their own government and had to fall back upon their minimum rights, no authority was left to protect them and no institution was willing to guarantee them.”[1]