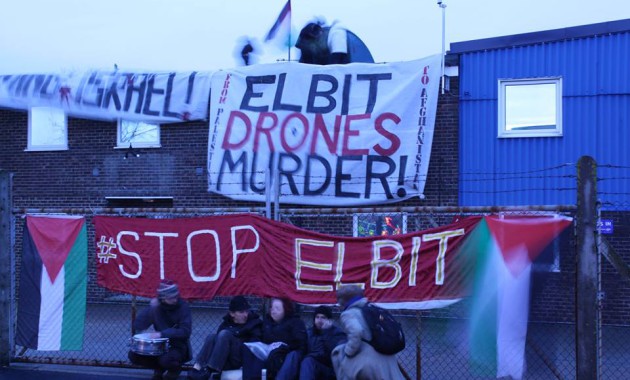 The recent case against the protesters at British drone manufacturer Unmanned Arial Vehicle Engines Ltd was promptly dropped at the end of January as it became abundantly clear that the company would need to provide export details in order to justify the prosecution. Protesters from London Palestine Action claimed that UAV Engines Ltd were providing engines to Israel and supplying parts for drones used during the recent bombardment of Gaza. The company is a subsidiary of the Israeli defence giant Elbit Systems. Protesters were to go on trial for aggravated trespass after they halted production at the factory in Staffordshire during a lengthy sit-in, however, the law states that an offence has been committed only if the activity that has been obstructed, within the definition of aggravated trespass, is lawful. In essence, UEL was entering into a much larger case than it had bargained for, one that would involve questions surrounding British involvement in Israel’s illegal wars. Unsurprisingly, evidence was not provided, and no questions were asked.

In the UK we expect the great arm of the law to bring justice no matter where, or upon whom, it falls. In recent months, however, we have had to face the increasingly dubious nature of our form of democracy with regards to freedom of speech, our media and what they choose to tell us. All of these things are deeply connected to the larger questions surrounding our foreign policy, one element of which is the arms trade and our involvement in ‘foreign’ wars. It is now that we must question the freedoms that we are told to be proud of and protect at any cost. It is also in light of recent events that we must question what we are told and why we are told it. It is only with these weapons at hand that we can truly achieve democracy, freedom and the tools to effect change.

The massacre at the Charlie Hebdo offices in Paris has encouraged much heated debate over values that we purport to be Western and over what extent, and in what context, they should be applied. These debates have often surrounded the idea that we and the Muslim world are mutually exclusive; that one cannot exist alongside the other and that there are two sides: us and them. Little time has been given to the notion that the powers at play, the proprietors of the war on terror and the terrorists themselves, are working towards the same primary goal: creating a tangible enemy. The ideas advertised by our media that tarnish all Muslims with the terrorist brush and encourage a world view that places an inherent violence in Muslim culture; an ‘anti-freedom’, ‘undemocratic’ culture, makes our globalised world a place of fear and ultra-nationalism. It creates anger and gives value to our war against the other. Likewise, the ideas advertised by extremist idealists that all ‘Western’ notions of freedom are inherently anti-religious and anti-Islamic, serve the same purpose: that you cannot be a true Muslim and live in the West. Charlie Hebdo has been hijacked by our own politicians, as it was intended by the terrorists themselves, to exemplify the inherent incompatibility of our two worlds; a poisonous fabrication.

Nothing displays these true aims to such an extent as the hypocrisy visible during the march in Paris attended by leaders from around the world and laughably led by Binyamin Netanyahu. Here stood some of the world’s least democratic leaders, with some of the highest records in detaining and torturing journalists. Together they stood with our own officials as they professed their determination to fight the common enemy. But what and who is the enemy? And what values make someone an ally? If it is not freedom of speech, which it clearly is not looking at the attendees, then what? It is extraordinarily simple: if we are force-fed the freedom of speech narrative, yet it is glaringly obvious that this is not the true issue, then we should be deeply concerned as to why this narrative exists throughout our media sources and determine to find out who the true proposed enemy is. A hint at what really governs the narratives we are fed is revealed in the responses to the recent death of King Abdullah of Saudi Arabia, and the death of Hugo Chavez of Venezuela. You can read a comparison by Stop The War Coalition here: http://stopwar.org.uk/news/compare-obama-and-cameron-s-reaction-to-deaths-of-saudi-king-abdullah-and-hugo-chavez, suffice to say, the backhanded support declared for the Venezuelan people after the death of their four-times elected and popular President was a mere pat on the back compared to the praise and heartfelt condolences offered to the memory of the repressive dictator who nonetheless supported the West.

The BBC in particular has had its fair share of criticism for biased reporting and the power that the Israeli lobby seemingly has over its decisions. George Monbiot has written fantastic pieces on the ways that the BBC breaks its own codes of conduct with regard to airing the views of supposedly impartial think-tanks without revealing the extremely biased funding of these bodies. With regard to issues of Palestine and Israel you do not need to look any further than the coverage itself to see that it is saturated with zionist narrative. A window into why this might be came in the form of an investigation into Jeremy Bowen, respected BBC Middle East correspondent, whose conventional online report was condemned as inaccurate and biased by the BBC Trust after thorough lobbying efforts by the Zionist Federation and CAMERA. First attempts by lobbyists Jonathan Turner and Gilead Ini to log their complaints with the BBC’s editorial complaints unit failed and were dismissed as unfounded leading them to approach the Trust directly. This eventually led to successful condemnation of Bowen’s article, though amendments appear to have made no change to the meaning and the original article remained on the Jewish Chronicle website without complaint. A comprehensive piece on the event has been published by Open Democracy: https://www.opendemocracy.net/ourkingdom/peter-oborne-james-jones/pro-israel-lobby-in-britain-full-text#m10.

It is a worrying state of affairs and one that should cause more concern than it invariably does. But it is the protection afforded by the media to our state actors in relation to serious war crimes and their complicity in crimes committed by other states that is the most disturbing.

Anger is growing among those that have felt the effects of expensive weapons first hand and among those that campaign on their behalf: Anne Marie O’Reilly recently stormed the stage at the ADS (Aerospace, Defence and Security) annual dinner in order to plead for some humanity and the London Palestine Action team succeeded in closing another drone manufacturer under the Elbit Systems umbrella, this time in Kent. They succesfully obstructed delivery and production for 15 hours and this time were not arrested. .

We know very little about the arms trade. It is one of the most secretive industries in the world, however, recent research into Israel’s economy and its Ministry of Defence sheds some light on where British manufactured weapons end up and what they are used for. Being a very new state and one that was created with defence as a primary objective, Israel is less interested in covering its tracks than the UK. Shir Hever, an Israeli economic researcher at the Alternative Information Centre, has written widely on the power of Israel’s MoD in relation to profit and government spending. Some rather chilling facts present themselves.

Israel’s defence industry is almost totally controlled by private companies meaning that the influence they carry in politics is dangerously large. Furthermore, the way that the MoD is structured means that it retains all revenue made from arms sales, essentially letting it boost its own budget. It is by all intents and purposes a private company. The unhindered and rapid expansion of the defence budget has led to covert attempts by Netanyahu to keep the numbers secret, however, the true nature of the issue cannot be hidden. We know already that Israel spends 8.4% of its GDP on defence. That is a larger proportion than the US and indeed the largest in the world. The result is that defence giants such as Israeli Aerospace Industries and Elbit Systems are becoming an increasingly important part of the Israeli economy, their interests taking an overwhelming precedence over those of civil society.

Unfortunately for the Gazans, attacks on their homes are directly linked to the ability of these defence companies to find new markets. The attacks are also a necessary requirement for Israeli companies to maintain their unique selling point: that their weapons are tried and tested. Trend shows that after every attack on Gaza, approximately every two years, there is an arms trade show where Israel displays its recently tested products. Shir Hever explains in his interview with The Real News Network – http://therealnews.com/t2/index.php?option=com_content&task=view&id=31&Itemid=74&jumival=12175 .

The facts are not only bleak but unlawful. Britain refuses to sanction Israeli arms companies and continues to trade with them whilst at the same time expressing deepest opposition to unnecessary suffering and war. Our most respected media sources refuse to call them out on it and continue to be swayed by pro Israel lobby groups and financial gain. Even though we have a respected and highly functioning legal system, the big players, particularly arms companies, are not required to defend themselves in court and behave with impunity on a global scale. We can only hope that the increasingly successful protests at the Elbit Systems factories succeed in exposing the state-corporate criminality of Britain’s arms industry.