From Oriental Nightingales to Peace Pigeons 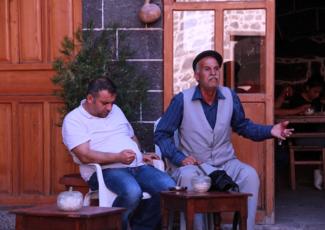 On a rainy winter night in Idil/Turkey, in 2011, the tribesmen whom I was interviewing asked their Dengbêj (Storyteller) to sing for them.[1] The Dengbêj said he could not sing anymore because he was ill. The tribesmen teased him, saying they knew he had stopped singing after they had been displaced from their land and resettled in a small town in southeastern Turkey in the early 1990s. That was not all, however: the Dengbêj also wanted to avoid appearing on Kurdish television—which had become a new forum for storytelling—for fear of potentially inviting the ire and violence of the Turkish state. Then, suddenly, the electricity went out. The Dengbêj started to sing in the darkness after years of silence, as if he found shelter in it. What was laughter turned to silence, and everyone pretended that nothing had happened when the lights came back on.

Nothing else was spoken that night. The Dengbej who had preferred to remain silent for years continues to remain silent. John Cage, the famous American experimental composer, has a composition consisting of total silence that continues for exactly four minutes and thirty-three seconds. It is said that Cage once declared: “I do not think that anyone will take this composition seriously, but it is something that I listen to every day.” From what I witnessed, silence has become a long-lived performance for the rest of a life that could only be broken by darkness. Darkness has covered the light and the silence, but it has made state violence and fear, and their relations to the performance of the Kurdish oral tradition, more visible.

A contentious relationship between Kurdish storytelling and the state dates back to the early 1940s, when republican culture missionaries collected and translated Kurdish songs into Turkish. But they ignored their Kurdish origin as a part of the cultural assimilation project carried out by the state. Bards and storytellers who insisted on speaking Kurdish were forced to flee and take refuge abroad.[2] Those who stayed either remained silent, or agreed to sing in Turkish.

Mihemed Arif Cizrawi, Dengbêj Şakiro, and many others found a solution in fleeing abroad. However, some Kurdish singers, such as Celal Güzelses, İbrahim Tatlıses, and Nuri Sesigüzel, opted to sing in Turkish, and were honored as “Oriental Nightingales.” In the years that followed, others, like Şivan Perwer, took refuge in European countries during the violent political environment of 1970s. By the 1990s, the Oriental Nightingales were followed by a new generation of Kurdish musicians who are called “fantasy musicians.”

Oriental Nightingales are good examples of the process of self-orientalism. First, they have come to be seen as the “authentic” voice and face of “the east” thanks to their accents, and have been given an opportunity to appear in movies to show “the backward, illiterate, and oppressed destiny of Kurds.” In accordance with the state discourse that there is no such thing as “Kurds,” but rather “mountain Turks,” they were allowed to speak in broken Turkish, but never in Kurdish.[3]

Those who remained and agreed to sing in Turkish were all given stage-names beginning or ending with “ses” (“voice,” in Turkish)—Tatlises/Sweet Voice, Guzelses/Beautiful Voice, Sesiguzel/Voice of Beauty—while their Kurdishness was ignored and stigmatized. Kurdishness could only be discussed when one talked about backwardness and all the other things that needed to be changed. Those voices had to struggle harder in order to prove themselves and obtain legitimacy among their “distinguished pure Turkish communities.” They had to speak of peace and brotherhood more than anyone else. Even the lowliest news correspondent could question and tease them because they were in love with a blonde woman or had shot a music video in the Maldives. While Turkish musicians insulted another Kurdish singer during an award night, they had to sing a hyper-nationalist anthem more loudly than others.[4]

As examples of self-orientalism, Oriental nightingales could only have a voice—as their last names make clear—but not words to utter. They are encouraged to sing with their nightingale-like voices, but they are not allowed to speak their thoughts. Thus, none of the oriental nightingales have been deeply interested in the Kurdish question, and it is hard to find in them a form of resistance or even criticism of the state’s attitudes towards the Kurds. It must be a devastating and painful experience for a musical tradition that has consisted of and been fed by storytelling, political satire, and resistance.

Oriental Nightingales, having performed their arabesque-style music for decades, have now been replaced by a new genre called “fantasy” music, which is also performed by musicians of Kurdish origin. Oriental Nightingales and fantasy musicians have created a hybrid discourse and transformed from one stage to another, by ignoring and rejecting the natural habitus that, at least partly, helped to form them.

Although fantasy music is considered the successor to arabesque music and there are similarities between them, there are also significant differences between the two genres, especially in terms of their relation to Kurdishness. First of all, arabesque was a result of the influence of Arabic music and became very influential among first-generation migrants from villages to cities during the urbanization of Turkey. Fantasy music is performed by the second generation of not-yet-urbanized migrants. Second, since the Turks’ common and problematic perception of Kurdishness fit well into the image of Oriental Nightingales, fantasy musicians have always avoided a visible connection to their predecessors. Third, while both the first and second generations of musicians prefer to avoid getting involved in Kurdish politics, members of the second generation of singers are much more careful with their political positioning in relation to Kurdishness. For example, Mahsun Kirmizigul and Ozcan Deniz, two leading figures of fantasy music—and, more recently, movie directors—state “they prefer not to sing in Kurdish, as they do not want their audiences to get confused.” Moreover, Kırmızıgül felt the need to send his movie’s script Güneşi Gördüm/I Saw the Sun, which is about the Kurdish conflict, to ministers of the AKP government right after their “Kurdish Opening”; he then revised the script according to their suggestions. Fourth, while Oriental Nightingales are usually called “kings,” “emperors,” or “fathers,” fantasy musicians are known as “princes.” These honorifics suggest the ways in which the two generations of musicians are perceived and interpreted by their audiences: fathers, emperors, and kings have power and responsibility towards their people, while princes do not have the same role or responsibility.

However, there are also many continuities between the two generations that deserve to be elaborated. First of all, their main audiences have tended to be members of the working and lower middle classes. The audience profile has changed over time, which in turn may have affected the ways these genres have been presented and performed. Arabesque music was quite famous from the 1960s until the early 1990s, when the influence of pop culture and music mixed with arabesque and created the new genre of fantasy music. Although the visibility of Kurdishness has weakened over the time, it can be said that both generations have a hybrid discourse in relation to Kurdishness. However, Kurdishness still appears as backwardness in Oriental Nightingales’ “broken accents.” By contrast, Kurdishness is hardly visible at all in fantasy musicians’ language use, which can be understood as a weakened representation of Kurdishness in the public sphere. Lastly, both genres are criticized by numerous groups, including the PKK, and are accused of degenerating (yozlastirma in Turkish) Kurdish people through music.[5]

Those who have wanted to have a word, not just a voice, were forced to flee abroad to be able to speak, but had to obey another kind of hegemony in the diaspora. They did not get a chance to exist, except as devoted opponents. Their music grew in the diaspora’s hegemonic environment and they were provoked, both inside and outside of their homeland, becoming alienated in both places. Their music was valuable as long as their words were appropriate to the power that surrounded them. The state could create an exception and show its anger or passion towards them. Şivan Perwer, among many others, was deprived of his citizenship without any concrete evidence or court verdict. But as time passed, the state created another exception: offering to reinstate citizenship as an act of “mercy.” However, no one asks why and how it is possible to revoke then return the right of citizenship without any legislation!

Şivan’s recent visit and appearance alongside Prime Minister Erdoğan have been much discussed. Some people did not expect him to appear at an AKP event after such a long absence, while others have supported him for taking on the initiative towards the “peace process.” It is important to state that Şivan did not and could not respond to the invitation of the pro-Kurdish Party (the BDP) to come to Diyarbakır, but felt obliged to come after Iraqi Kurdistan Regional Government leader Mesud Barzani invited him. The same thing occurred when Ciwan Haco, another well-known Kurdish musician in exile, visited Turkey. He first appeared in a famous television program presented by Hülya Avşar, a well-known musician and television star. While no one knew him in the Turkish public sphere, he was the idol of all Kurdish youth. However, he preferred to appear on a Turkish program instead of for a Kurdish-led organization. These cases show that the hegemony surrounding Kurdish singers inside Turkey does not exclude those who live in exile, as they also have to arrange their acts accordingly when they enter the Turkish public sphere.

Moreover, one of the ironies of Şivan’s visit was his duet with Ibrahim Tatlises. One of the songs they sang together, “Bingol Şewitî” (“Bingol Was Burned”), was only partly sung. They sang only “Bingol Şewitî mij dûman e / megrî megrî dayê megrî” (“Bingol was burned, it is all smoke / do not cry, do not cry, oo mum! Do not cry!”). Yet the song is about how the military kills a PKK fighter, Zeki, burns down his village, and tortures his relatives and other villagers. In place of this lyric, they added a line to the song saying: “peace is coming, oo mum, do not cry!” Another irony was the second song Şivan sang with Tatlises. The song, “Canê,” was composed by Şivan in Kurdish, but translated into Turkish by Tatlises without mentioning its composer and origin. To state it more directly, the song was actually stolen by Ibrahim Tatlises. This example can be compared to an urban legend that is narrated about the Armenian musician Bimen Şen. It is said that a translator for TRT, the official state television and radio station, translated many Kurdish songs into Turkish by stating that they were anonymous (bimenşe’, an Ottoman Turkish loan word derived from Arabic). However, over time, all these songs somehow began to belong to Bimen Şen. It is, of course, a funny story, although no one knows if it is true. What it does confirm is that Kurdish music has stayed bimenşe’/anonymous in the Turkish state’s mind.

Undoubtedly, no one speaks about those who remained silent and have never sung again after the state’s violent intervention against the Kurdish cultural and musical space. There is no time to talk about and analyze silence in an environment where whoever speaks the loudest is the one who is obeyed. But now, it is time to think about the dengbêj who remained silent for years, who could only sing after the electricity was briefly cut and darkness covered everything—because the power of the state has polluted everything that takes place in the light.

[1] Storytelling (dengbêjî in Kurdish) is an essential part of Kurdish oral tradition and a mixed form of poetry, music, and stories.

[4] Ahmet Kaya, a Kurdish singer who had to flee to France in 1999 after announcing during an awards show that he wished to produce music in Kurdish; he died in exile there a year later, at the age of forty-three.