How Australia, the US and Britain helped block Bougainville’s class action against Rio Tinto 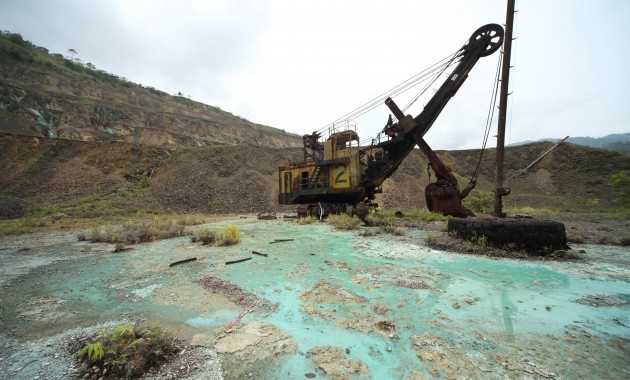 Internal government records obtained through Freedom of Information reveal the significant lengths to which the Australian, British and US states went to stop a Bougainvillean class action against Rio Tinto, allegedly with support from the Papua New Guinea and Bougainville governments.

For example, in his magnificent conflict memoir Leonard Fong Roka recalls seeing a military convoy as a young student in 1989, ‘the largest was a camouflaged truck; in the centre was a BCL double-cab Toyota Hilux followed behind by a camouflaged Land Rover. All were laden with uniformed and armed to the teeth soldiers’.

Roka continues, ‘my extended family became alert to every development in the area. From their hillside home their eyes watched the tunnelled entrance of the Panguna mine pit for police or army vehicle convoys, many of which were made up of BCL’s yellow trucks and cars’.

To complicate matters in 1990 a military blockade and communications black-out was placed upon Bougainville, with troops operating under shoot to kill orders. As a result, simply sending news of fresh atrocities to the outside world was itself an extremely challenging task, organising an international legal campaign which could address the allegations against Rio Tinto was near impossible.

That would have to wait for after the war, which came to a gradual end in 1997. The first major effort, in this respect, came in the form of a class action initiated in 2000 by former Bougainville Premier Dr Alexis Sarei, a towering political figure who sadly passed away earlier this year.

Employing the Alien Tort Statute, Bougainville became something of a test case to see whether US courts could assume extra-territorial jurisdiction over multinational corporations accused of gross human rights abuses overseas.

The litigation itself centred factually on allegations that Rio Tinto, through BCL, provided significant logistic support to the PNGDF, which enabled troops to commit gross human rights abuses. Since these allegations were first levelled in the class action, significant supporting evidence has emerged, including testimony from BCL’s senior management team (1988-90), outlining the logistic support which they claim the company gave to the PNGDF during 1989/90.

However, the US court action would never reach the stage where questions of fact could be determined, instead the case was closed down in 2013 on jurisdictional grounds. We now know, through Freedom of Information requests that the Australian, British and US governments lobbied for this outcome.

From the records available, it would appear Australia was one of the most active states arguing for the case to be dropped.

In a warning to the US State Department written in 2001, Australia’s Department of Foreign Affairs and Trade (DFAT) underlined the fragility of Bougainville’s peace. The class action, it argued, ‘would be an unsettling and destabilising event in circumstances where the need for stability and certainty on the island is paramount’.

Then in the worst neo-colonial tradition, where paternal officials presume to know what is best for people over which they have no rightful mandate, DFAT’s First Secretary claimed, ‘if the peace process were to be disrupted by this court case the welfare of the people on the island would suffer’.

At the time this contradicted the testimony of Bougainville’s own leaders who claimed ‘it is important to Bougainvilleans and the long-term reconciliation process that Rio Tinto’s responsibility be addressed in an impartial forum by an impartial judge’.

Nevertheless, the Australian government would go on to take a lead role in petitioning the US courts to strike down the case. In 2011 the British government debated whether to continue working with Australia on these efforts.

Britain’s Foreign and Commonwealth Office observed, ‘if Ministers decide that HMG [Her Majesty’s Government] should file a brief with the US Supreme Court this will need to be agreed with the Australian Government and submitted by 28 December [2011]’.

In support of the motion, the Foreign and Commonwealth Office noted, ‘we have filed two amicus briefs [in support of Rio Tinto] previously in the Rio Tinto proceedings … this is an important opportunity to set a useful precedent for British businesses’.

That said, the Foreign and Commonwealth Office acknowledged that their opposition may cause some reputational damage to the British government: ‘By submitting an amicus curiae brief HMG would be acting to seek a result that will undeniably remove a possible remedy for victims of alleged human rights abuse (albeit one we consider to be contrary to principles of international law). It could also be interpreted as cutting across our stated ambition to challenge impunity and to help deliver justice to victims of the most serious of international crimes’.

Despite this risk it was felt British business interests were weighty enough in this instance to warrant the government’s opposition: ‘Extraterritorial jurisdiction is a problem for business, particularly in the US courts which have power to make very high damages awards. [redacted] Supporting Rio Tinto in this case (and more generally the interests of UK business as a whole) is consistent with the FCO’s commitments under our Charter for Business’.

The Foreign and Commonwealth Office also confirmed to Ministers that British opposition to the Bougainville class action against Rio Tinto would have the support of the Autonomous Bougainville and PNG national governments: ‘Port Moresby advise that supporting the brief should not adversely affect PNG-UK relations as a court ruling against Rio Tinto could hinder the National Government and the Autonomous Bougainville Government plans to reopen the Panguna copper mine’.

However, Australia and Britain were not alone in their opposition; the US State Department also lobbied for the case to be dropped.

Like their Australian counterparts, the US government argued that the case might cause irreparable harm to the Bougainville peace process. However, the US went one step further, suggesting the class action might even invalidate the Bougainville Peace Agreement which was signed on 30 August 2001: ‘In our judgment, continued adjudication of the claims identified by Judge Morrow in her August 30 [2001] letter would risk a potentially serious adverse impact on the peace process, and hence on the conduct of our foreign relations. According to local custom, the concept of “reconciliation” is at the heart of the peace process. We understand that acts of reconciliation have already occurred as a foundation to the August 30 agreement, and that adjudication in a foreign court of the issues alleged in this case could invalidate these steps and sweep away the basis of the peace agreement’.

The State Department also raised concerns over potential damage to America’s bilateral relationship with PNG: ‘The Government of Papua New Guinea, in particular, has stated its objection to these proceedings in the strongest terms … We cannot lightly dismiss such expressions of concern from a friendly foreign state’.

While class actions are complicated affairs, which are certainly not without flaws, the premature end of the Bougainville case has at the very least aborted an important public hearing on a major episode in South Pacific history, punctuated with serious organisational wrongdoing.

As a result many would be unaware that certain signed affidavits which courted media controversy in 2011, are the mere tip of an evidentiary iceberg. Stored in a US case file are thousands of pages of internal BCL records which support some of the allegations contained in the oft cited affidavits, in addition to admissions made by BCL’s senior management team.

While the Bougainville class action is seemingly closed, reparations remain a fundamental right of victims under international law. Those who suffered serious loss as a result of the gross human rights abuses on Bougainville deserve acknowledgement and closure. Yet in the aftermath of the case’s premature end, no alternative forum has been offered to victims through which to bring Rio Tinto to account in a robust, transparent way. Instead, BCL has signalled its desire to resume its Bougainville operations, with its Chairman claiming ‘the consensus is now firmly in favour of BCL being the preferred operator of the mine at Panguna if it restarts’.

Yet there is compelling evidence to suggest survivors of the conflict remain resolute in their quest for justice. That said, it is almost certain that these efforts will remain deeply contested by not only Rio Tinto, but the very same states who conspired in opposition to the US class action over the past decade.

However, the local groundswell in support of justice is such that something must be done. In all likeliness the same state-corporate parties which opposed the Bougainville class action will champion a much more discrete mechanism that allows Rio Tinto, via BCL, to ‘participate’ in the reconciliation process, without making an admission of liability, or opening up its archive so full account can be made of its past conduct.

This mechanism will almost certainly be backed by some local actors, however, there will be no thoroughgoing effort to determine whether this discrete, non-obligatory option meets the expectations of victims and their families. Instead, those who raise concerns will be labelled, as before, threats to peace, stability and progress. However, whether these attempts to marginalise dissident voices will be a success, remains to be seen.

*Dr Kristian Lasslett is a Lecturer in Criminology at Ulster University and sits on the Executive Board of the International State Crime Initiative. His book ‘State Crime on the Margins of Empire’ is available from Pluto Books.