The Geopolitics of Silence: Genocide and Complicity in China 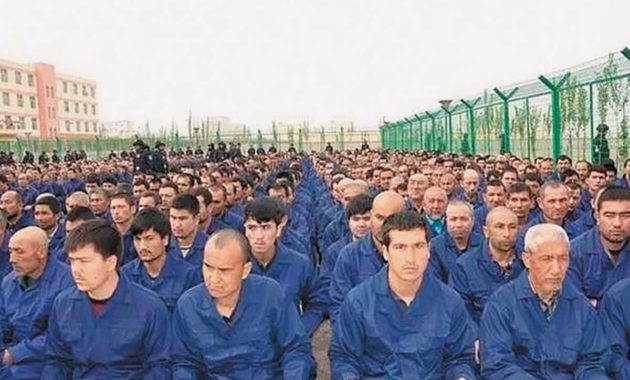 Under the cover of a global pandemic, China has passed a national security law which delivered a decisive blow to those campaigning for their rights in Hong Kong. The new law claims to ‘halt secession, subversion, terrorism and collusion with a foreign country or with external elements to endanger national security’.[1] For many Hong Kongese, these new laws are seen as the death knell of their relative freedom from the CCP’s tightening grip and the end of ‘One country, two systems’. However, what has seen a relative lack of press coverage, as usual, is the ongoing genocide of the Uyghur people almost three and a half thousand kilometres northwest of Hong Kong, in Xinjiang.

At the International Court of Justice in December 2019, Aung San Sui Kyi justified the persecution of Rohingya and other ethnic minorities by the Burmese military on the grounds of defending against Islamist terrorism.[2] The Chinese state uses the same narrative to deny the nature of its treatment of Uyghurs and other ethnic minorities in China’s Xinjiang Uyghur Autonomous Region.[3] This language of ‘counter-terror’ is part of a tool kit of public diplomacy that Nadera Shalhoub-Kevorkian would call ‘combat proven’ politics: the false, learned and reproduced justifications that the international community is willing to swallow. What both Burma/Myanmar and China are hiding, though, is a genocidal process.

Raphaël Lemkin described genocide as “an affront to or attempted deterioration of the lifeblood of a national group”, including its “culture, language, religion, national feeling and the destruction of personal security”.[4] The ill-kept secret of the current detention of over a million ethnic Uyghurs in a growing network of vast internment camps is only one element of a sustained attack on the lifeblood of the Uyghur group. Accounts from inside the camps make claims of torture, brainwashing, sexual violence and forced sterilisation.[5] Even when not in camps, the Uyghurs are subjected to an awesome array of panoptical surveillance, inducing self-regulating behaviour. The sheer scale of the surveillance in major cities in Xinjiang is now comprehensively understood. Police stations on every block, a camera system covering every centimetre of the city, and pioneering facial recognition technology used in predictive policing to monitor and oppress the Uyghurs in a veritable ‘digital gulag’.[6] The surveillance is designed to wipe clean any semblance of Uyghur culture by monitoring their every move, and then justifying their imprisonment for crimes such as wearing beards, using familiar Islamic greetings, or other overtly public displays of Islam. This surveillance continues inside the home with the placing of Han Homestay ‘big brothers and sisters’ to keep an eye on citizens.[7]

Adrian Zenz has detailed the systematic state-led campaign of intergenerational separation of the Uyghurs.[8] Uyghur children are housed in a network of state-run orphanages, where they are indoctrinated and forced to forget their ethnic heritage. ‘Forcibly transferring children’ of the target victim group to another group is an act of genocide, insofar as it contributes to the attempted destruction of that group – destruction inherent in the attempted annihilation of a group’s cultural or religious identity and heritage.[9]

Kashgar’s skyline, hitherto occupied by hundreds (possibly thousands) of minarets, is now without them.[10] An increasing number of mosques throughout Xinjiang have been razed, while others have had their minarets removed. Uyghur burial grounds have also been ‘relocated’ or destroyed.[11] The destruction of many of the Uyghurs’ cultural and religious sites is a salient example of the Chinese effort to erase Uyghur culture in Xinjiang. In a Lemkinian framework, this is a clear deterioration of the lifeblood of the Uyghur group. From a legal point of view, we can infer from these actions some intent for the purposes of the Genocide Convention.

However, despite there being countless alarming indications of an intention to annihilate the Uyghurs, international scrutiny has been conspicuously absent. Measures taken so far include a coalition of 23 nations in the UN condemning the detentions in Xinjiang. However, this was swiftly followed by an opposing coalition of over 50 countries (though not all the names have been made public) – many of them Muslim majority countries – supporting China and their indefatigability in the endeavour of promoting human rights.[12] An act of US congress censuring the Chinese state and a release of leaked cables has increased scrutiny, but there remains a dangerous lack of international attention.[13] This may be characterised as the ‘geopolitics of silence,’[14] and there are a number of geopolitical factors that may explain the relative silence and inaction of some countries, and the fervent support from others.

While the United Nations Security Council (UNSC) is the preeminent world body responsible for the maintenance of peace and security, China is a permanent, veto-holding member. China’s use of the veto has increased steadily since the late 1990’s as their strategy of ‘Keeping a Low Profile’ under the leadership of Deng Xiaoping transformed into one of ‘Striving For Achievement’ – that is, exerting increasing diplomatic and political influence after years of quietly building a vast economic base.[15] Twelve of the fifteen vetoes by China have come after 1997.

China is an economic powerhouse. Since the announcement in 2013 of Xi Jinping’s ‘One Belt One Road’ initiative, estimates of around USD$1 trillion has been promised to infrastructure investments across the Eurasian continent, Africa and South America, primarily, as Frankopan points out, in the form of loans.[16] Mike Pompeo (without irony, or any sense of US history) characterised this as “predatory Chinese lending and infrastructure investment in developing nations”.[17] When countries criticise China for human rights abuses – be it in Tibet, Hong Kong, Xinjiang, or elsewhere – the state usually responds with claims of territorial sovereignty and deplore flagrant interference in the domestic affairs of their country. There is also a clear tension between human rights and trade relations. It is no coincidence that the only country powerful enough to challenge China on any meaningful level is the US, who continues to be one of China’s more vocal opponents and have applied trade sanctions as punishment for human rights abuses. Notwithstanding, if former national security advisor, John Bolton’s insider scoop is veracious, then Mr Trump’s occasional hard line on China disguises the fact of his original support of Xi Jinping over the detention of Uyghurs in internment camps. “Trump said that Xi should go ahead with building the camps, which Trump thought was exactly the right thing to do.”[18]

Pompeo has also commented on the US and China’s incompatibility based upon human rights issues. Though these cries of inhumanity are more often a side issue which accompany the United States’ more imminent and potentially existential concern that China are subverting and in some measurable ways replacing them as the inheritors of global hegemony. Though, of course, the two are not mutually exclusive.

The preferred defence of the Chinese government when faced with these charges is a co-option of the war on terror paradigm, which explains why some countries may not be too quick to confront China on this issue. China claims it is attempting to stymie the threat of terrorism and ‘instability’ in the XUAR, which has porous borders. Xinjiang is also a particularly resource-rich region, and its proximity to central Asia makes it a strategically vital region for China’s OBOR.

Recent evidence, however, has come to light, both in the form of The China Cables in November 2019,[19] and the more recent reports from China concerning ‘family planning’ performance targets which shed further light on the claims of sterilization of Uyghur women.[20] The China Cables are leaked official documents that include menacing instructions on how to run the Xinjiang internment camps: “Strictly manage and control student activities to prevent escapes during class, eating periods, toilet breaks, bath time, medical treatment, family visits”, and so on. It instructs guards to “strictly manage students requesting time off, if they really need to leave the training center due to illness or other special circumstances, they must have someone specially accompany, monitor and control them”. Guards are implored to “discover and dispose of behavioral violations and abnormal situations in classrooms, dormitories and other areas in a timely manner, and evaluate and resolve students’ ideological problems and abnormal emotions at all times”. This is in effect a regime of restrictions and ‘brainwashing’. The ‘family planning’ documents describe birth control and sterilisation targets for women in southern Xinjiang. Targets include plans to ‘sterilize approximately 14 and 34 percent of women between 18 and 49—in a single year’. These aims, as was outlined earlier, are – in conjunction with the myriad other measures put in place to persecute the Uyghurs – genocidal in intent.

Lemkin’s attempt to enshrine the most egregious of crimes into international law in 1948 is all too often overlooked or simply not widely known. Political discourse is awash with euphemistic phrases such as ‘ethnic cleansing’, ‘demographic’ ‘cultural genocide’, when what is in fact meant – as Lemkin clearly mapped out – is genocide. The Uyghurs’ culture and way of life is being deliberately and systematically deteriorated by the Chinese state, a haunting but familiar story. Whether it be the Rohingya in Burma/Myanmar, the Uyghurs in Xinjiang, or more recently the BJP’s menacing legislation in India fast-tracking citizenship to all but Muslims, with plans for a follow-up census – members of Islamic affiliated groups are being persecuted around the world under the guise of protecting against the threat of terror and compromising territorial stability or integrity. The international community, including the mechanisms of the UN, are proving yet again that they either cannot stop or are not interested in stopping genocide.

Human Rights Watch quote a Uyghur named Tohti who left Xinjiang in 2017: “What they want is to force us to assimilate, to identify with the country, such that, in the future, the idea of Uyghur will be in name only, but without its meaning.”[21] The international community must act quickly and respond before the lifeblood of the Uyghur community is irrevocably drained away.

[9] “Convention on the Prevention and Punishment of the Crime of Genocide.” United Nations. (1948).

[10] Lily Kuo, “Revealed: new evidence of China’s mission to raze the mosques of Xinjiang,” The Guardian and Bellingcat – https://www.theguardian.com/world/2019/may/07/revealed-new-evidence-of-chinas-mission-to-raze-the-mosques-of-xinjiang

[14] Tom Gladstone, “Unrecognised Genocide: An Analysis of Uyghur Persecution in the Xinjiang Uyghur Autonomous Region,” Submitted to the Faculty of the School of Global Studies of the

University of Sussex in partial fulfillment of the requirement for the Degree of Master of Arts in Geopolitics and Grand Strategy (August 2019).

[15] Yan Xuetong, ‘From Keeping a Low Profile to Striving For Achievement,’ The Chinese Journal of International Politics (2014) pp.153-184.

[16] Peter Frankopan, The New Silk Roads: The Present and Future of the World, (London: Bloomsbury Publishing) 2018.