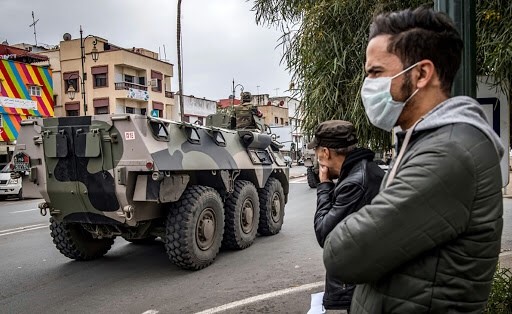 The highly securitised and militarised approach adopted by Morocco to tackle Covid-19 has spread criticism among rights groups and advocates. U.N. High Commissioner for Human Rights has listed Morocco as one of the fifteen countries where security forces have been “using excessive and sometimes deadly force to enforce lockdowns and curfews”.[1] On 9 June 2020, Amnesty International criticised Morocco for “exploiting [the pandemic] to prosecute human rights activists, citizen journalists and others for peacefully criticizing the government’s handling of the COVID-19 crisis”.

Morocco has imposed a 3-months long lockdown that lasted from 20 March to 10 June 2020. The Kingdom enforced rigorous lockdown rules including strict night curfews and the obligation to wear masks at all times. People could only leave their homes to buy food or medicine, and only the ones with a special permit delivered by the authorities could go to work. Anyone breaching these rules faced up to 3 months in prison. The police and the army were in charge of enforcing the rules. The State even sent military tanks in the streets in an attempt to dissuade and intimidate citizens. Videos on social media emerged showing security officials beating and slapping people who did not abide by the rules. In addition, the Kingdom has arrested and convicted an unprecedented number of citizens for expressing peaceful opinions on social media, relying on the pandemic as a cover to censor freedom of speech.

Morocco is a monarchy with a population of 36 million inhabitants. King Mohammed VI who has been ruling the country since 1999. The monarch holds the judiciary, executive, legislative, but also economic powers (see here and here). Although there is a Prime Minister, he does not hold any concrete power and decision-making remains in the hands of the palace. Parliament’s influence is negligible – if not non-existent. The King dictates his policy and his ministers execute (see here).

In 2017, Morocco’s GDP per capita was $3.046, out of which 5.25% was expenditure on health. The estimated expenditure on health per capita in 2017 was $438, a low number compared to neighbouring countries such as Algeria ($974) or Tunisia ($863). This lack of public health expenditure is reflected in the state of public hospitals. In 2018, Morocco had only 9.9 hospital beds per 10.000 inhabitants, and 7.1 doctors per 10.000 inhabitants. Morocco has only 1.65 professional health workers (physicals, nurses and midwives) per 1.000 inhabitants, which fails to meet the minimum recommendation of 2.3 per 1.000 established by the World Health Organization (WHO) as necessary to deliver essential health services. Due to the critical stake of public hospitals, Moroccans who can afford it resort to the private sector or get treated abroad. Although public hospitals are technically “free”, widespread corruption forces patients to pay bribes in order to be able to receive treatment.

Although there is universal public healthcare in Morocco, the situation of public hospitals is so critical that people who can afford to turn to the private sector – around 30 % of the population. Covid-19 has highlighted Morocco’s acute structural problems in the healthcare system.

Several nationwide strikes and demonstrations of the public medical sector erupted across the nation throughout the years of 2018 and 2019. Medical staff denounced alarming working conditions, low salaries, overcrowded hospitals, lack of equipment and shortage of human resources. Moroccan doctors working in the public sector earn an annual salary of £7.000 (84.000 dirhams). As a result, many doctors chose to switch to the private sector or migrate to seek better opportunities. In 2019, around 8,000 Moroccan doctors were working overseas. In December 2014, former Health Minister Louardi sparked public outrage by blaming the country’s crippled health sector on doctor absenteeism. Health professionals reacted by sharing pictures and videos of public hospitals on social media to expose their abhorrent working conditions. Dozens of photos showed wet blankets, blocked toilets, and patients forced to sleep on dirty floors.

But the regime does not tolerate any criticism. A patient who had to wait several days before undergoing a leg surgery expressed his frustration against medical staff and State authorities on a video he posted on Facebook. On 6 January 2020, a Court sentenced him to two years in prison for “insulting public officials”. Harsh jail sentences against citizens who express dissident opinions are not unusual in the Kingdom, and the regime has been exploiting the Covid-19 pandemic to further censor freedom of speech.

Between the 23rd of March and the 22nd of May, security forces have arrested hundreds of thousands of people for breaking lockdown rules, and have prosecuted a total of 91.623 individuals.

Pandemic as a cover for the extension of power

Between the 23rd of March and the 22nd of May, security forces have arrested hundreds of thousands of people for breaking lockdown rules, and have prosecuted a total of 91.623 individuals (figures disclosed by the police). On 26 April 2020, a minor died in police custody. He had been arrested for breaching lockdown rules and the circumstances around his death are yet to be established. Whilst security forces can be expected to enforce lockdown rules, international human rights conventions establish the necessity of proportionality in law enforcement. It is clearly excessive to imprison someone for breaking curfew rules such as not wearing a mask in public.

UN High Commissioner for Human Rights said Morocco was one of the fifteen countries where security officials have been using excessive force to enforce lockdown rules (see here). She warned that governments should not use emergency powers “as a weapon […] to quash dissent, control the population, and even perpetuate their time in power”.

The Moroccan State has arrested and imprisoned several citizens who expressed non-violent opinions on social media, as the King remains fearful of popular discontent fuelled by social media. On 1 April 2020, human rights activist Siham El Makrini was arrested and interrogated for 4 hours by the police because she published a Facebook post calling for the suspension of electricity and water bills amid the pandemic.

A few weeks later, vice-president of the Moroccan Association for Human Rights (AMDH) Omar Naji was arrested and put in pre-trial detention because he criticised Moroccan authorities’ decision to confiscate merchandise from unauthorized vendors. He was released on bail and is currently awaiting his trial. On 28 May 2020, a Court sentenced human rights activist Abdel Fattah Bouchikhi to 4 months in prison because he exposed corruption practices among Moroccan authorities in delivering “transport permits”. Amnesty International has criticised this series of arrests and convictions, stating that “it is not a crime to question the government’s response to the pandemic or call out the shortfalls of its approach”.

In April 2020, the Parliament tried to pass a law criminalising the “dissemination of false information” on social media, and prison terms ranging from three months to six years for offenders. The bill was later suspended following massive criticism social media users and heavy criticism from rights group who denounced an outrageous attack on freedom of expression.

On 23 May 2020, authorities arrested independent journalist Sulaiman Raissouni, editor in chief of Arabic newspaper “Akhbar Al-Youm“, known for his critical stand against the regime.[2] Press freedom advocates have denounced a political arrest, and pointed out a series of due process violations. Indeed, there is no independent justice in Morocco, and Courts are regularly used to silence dissidents and independent journalists (see here). Few days before his arrest, Raissouni had published an editorial criticising the Moroccan State for exploiting the pandemic to breach human rights and fundamental freedoms.

This number of arrests and convictions comes despite outbreaks of Covid19 cases in many prisons across the country (see here).

On 13 March 2020, Morocco took the sudden and immediate decision to suspend all international flights. More than 33,434 Moroccan nationals[3] who were overseas for professional or personal reasons found themselves stranded abroad, with no possibility of coming back. The government refused to repatriate them, including vulnerable, elderly, and ill citizens. Stranded Moroccans found themselves separated from their families for more than three months, including the month of Ramadan and the Eid (religious holiday).

Whilst many countries have closed their borders to foreigners, Morocco is the only country in the world that has barred its own nationals from coming home.

Whilst many countries have closed their borders to foreigners, Morocco is the only country in the world that has barred its own nationals from coming home. It also took this decision so abruptly, without giving any prior notice and the chance to Moroccans to book a home flight.

Stranded Moroccan citizens include those who work as undocumented migrants and lost their jobs following the economic shutdown, tourists whose visas in the country they visited have now expired and find themselves in an irregular legal situation, or patients who initially went abroad to undergo special medical treatments that are not available in Morocco.

Many found themselves having to sleep in the streets. The Washington Post reports that some Moroccans were so desperate that they jumped into the Mediterranean Sea to come back home. Civil society groups describe this situation as “a human tragedy“, saying that “parents are suffering, couples are suffering, children are mourning their father and mother’s absence […]”.

Moroccans have protested in front of embassies and consulates, alerted media outlets on their situations, and begged the King to let them come back. But the regime remained unresponsive.

This management had led to tragedies. In May, a woman was found dead in the streets of Melilla – a Spanish enclave in Northern Morocco. Unable to return to Morocco and to afford a place to stay, she was sleeping in a migrant camp whilst waiting for Moroccan authorities to reopen the borders. Few days before, an asthmatic Moroccan national  stranded in the Philippines died because he could not afford medicine. Before his death, this father of two published several videos begging Moroccan authorities to let him come back, or at least financially help him.

In late May  2020, whilst the lockdown was still enforced, Morocco organised the special repartition of Moroccan managers working for a French multinational – whilst the rest of citizens were still stranded abroad (see here). Social media users vehemently criticised this decision, stating that “not all citizens are equal ” and that “economy trumps human rights in this country”.

Morocco began the process of repatriation of its own citizens until the 9th of June 2020, little by little, by prioritising certain populations deemed “vulnerable”.[4] The rest who are living in limbo have to wait until Morocco reopens its border, on the 2nd of July 2020, to be able to come back home.

Like in many other countries, the use of a tracing app to contain the spread of Covid19 has raised privacy concerns. Citizens expressed apprehensions regarding data rights, especially when considering surveillance techniques used by the Moroccan regime to arrest political dissidents and critical journalists. There is a risk that data from tracing apps might be used by law enforcement to prosecute and track citizens, notably through the use of GPS location.

King Mohammed VI did not address the nation once during this pandemic.

King Mohammed VI did not address the nation once during this pandemic. In more than 20 years of rule, the monarch never gave a single interview. Overall, this crisis has exposed the profound undemocratic and securitised nature of the Moroccan State. Instead of addressing long-term problems and shortages in the public health sector, Morocco has offered a short-term and highly-securitised response to the Covid19 pandemic.

[2] This is the third journalist of the same newspaper to be arrested within the past two years. Few months earlier, a journalist of Akhbar Al-Youm had been sentenced to one year in prison for “abortion” and “sexual relationships outside marriage”. The founder of the newspaper is currently serving a 15-years sentence.

[3] Number estimated by the Moroccan government.

[4] By “vulnerable people”, the Moroccan government includes disabled, pregnant women, and citizens who are ill or have been hospitalised recently.