COVID-19 and State Crime in Argentina 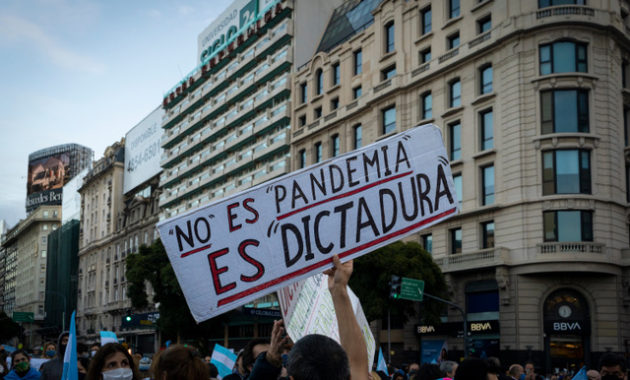 by Alice Cropper and María Barraco

Argentina has a population of 44.9 million, and is one of the largest economies in Latin America, with a GDP of around US$450 billion. However, since 2018 the country has been in recession, experiencing economic stagnation and a reduction in GDP. This has been exacerbated by COVID-19 and during the second quarter of 2020 Argentina suffered a decline in GDP by 16.2% – the largest retraction in its history. Furthermore, urban poverty in Argentina remained high at the start of the Pandemic, reaching 40.9% of the population, while extreme poverty increased to 10.5% and children poverty rose to 56.3%.

Alberto Fernández, the president of Argentina, was sworn into office in December 2019, three months before the pandemic was declared. Under President Fernádez, Frente de Todos is now the leading political party. Upon his arrival, he enacted the Law 27.541, declaring the economic, financial, administrative, social security, tariff, energy, health and social crisis.

Argentina did not declare a “State of Emergency” to face the Pandemic, as other Latin American countries did. Instead, the first Presidential Decrees enacted during the Pandemic, Decree 260/20 which established different limitations on human rights, extended the public emergency declared by Law 27.541 due to the Pandemic. The constitutionality of the limitation of rights in the context of the Pandemic through the use of Presidential Decrees has been criticised by different scholars. In any event, it should be highlighted that Argentina notified the Organization of American States (OAS) about the suspension of rights, in accordance with Article 27 inc.3 of the American Convention on Human Rights (ACHR).

One of the main violations in Argentina is related to the legality of the restrictions of rights per se. As the Inter-American Court of Human Rights (IACtHR) and the Inter-American Commission on Human Rights (IACommHR) emphasised in their statements, any limitations to human rights introduced during the pandemic must comply with the requirements of legality, temporarily and absolute necessity. Nevertheless, Argentina introduced strict measures from the 12 March 2020 (through Decree 260/20), when there were only ten cases of COVID in total; and extended them until the 7 November (Decree 875/2020). Accordingly, Argentina had almost eight months of strict limitations on human rights, with a questionable fulfillment of the requirements aforementioned.

The Decree 313/2020 prohibited Argentineans from returning to Argentina, impacting the right to freedom of movement. Despite 89% of nationals being repatriated by the end of April, 21,493 were still stranded. This limitation is disproportionate, especially because there were alternate ways to obtain the same purpose of limiting the risk of nationals bringing in COVID-19 from other countries. Such as, allowing nationals to return and quarantining them in hotels, or administering COVID-19 tests.

The right to freedom of expression was another right infringed upon. The IACommHR expressed its concern about Argentina’s cyber-patrolling on social media. The “Centre for Legal and Social Studies” (CELS), a well-known human rights NGO, published an analysis on the Protocol on cyber-patrolling, detailing the main violations introduced by this measure. It is worth highlighting that cyber-patrolling is explicitly prohibited by a recent Law regulating “National Intelligence”.

Furthermore, the right to access to justice was not adequately guaranteed, since the judiciary suspended its functions for several months, as highlighted in a recent report published by ACIJ. This is particularly serious, especially since in the context of an emergency it is precisely the judiciary who are responsible for holding the state accountable for any human rights violations.

Argentina introduced some positive measures regarding social and economic rights, such as the prohibition to suspend electricity, gas, water and internet due to lack of payment, and the establishment of an economic aid to help individuals in situations of poverty. However, some economic, social and cultural rights were violated in this context.

The right to access to education was one of the most affected rights. Decree 297/2020 suspended in-person teaching for all educational levels. Consequently, this measure discriminated in regard to accessing education, as many students in Argentina do not have the means to attend online classes. For example, due to a lack of a computer or a lack of internet access. In this vein, an NGO filed a complaint against the Municipality of the City of Buenos Aires, as many students living in precarious neighborhoods did not have access to education due to a lack of internet. The court ruled that the government must guarantee access to free internet in the neighborhood, and provide free computers to the children living there.

The right to food was also affected, as COVID-19 impacted production chains in various ways. The indirect impact of the crisis should not be under-estimated, and all necessary measures must be taken to ensure the rights of people are not affected by the loss of purchasing power and increase in food prices, especially when many Argentinians currently fall below the poverty line. The government was criticised for buying tons of food at prices well above the market value. Two measures were passed by the government: Decree 287/2020 (emergency purchasing) and Decree 338/2020 (contingency procedure). This changed procedures to an individual method that generates a closed reserve of bidders with no digital record of transactions. A few days later, the Government launched the purchase of thousands of products with the use of these two systems. The purchase of noodles, oil, sugar and lentils to supply the soup kitchens, left a damage of 68 million pesos. The surcharge exceeded 50% in the case of sugar and 85% in lentils. On 8 April 2020, the National Procurement Office sent a note 8/2020 to all state buyers determining that now in emergency purchase processes, no cases may amount to higher than the Maximum Prices established. However, the economic and political damage already committed by the government in this corruption in procurement is substantial. Although the government must ensure an adequate right to food, it must not do this through corruption in purchasing.

Argentina was already in a situation of crisis and inequality; the Pandemic has acted to exacerbate this to extreme levels. The State’s response was marked by a strong figure of the Executive power, and by a strict limitation of human rights which resulted in several violations of both, civil and political, and social and economic rights.

Currently, Argentina is experiencing a new rise in COVID-19 cases according to WHO statistics. In this sense, it will be crucial to monitor if the State’s response is similar to the one enacted during 2020, which resulted in the many violations of human rights previously mentioned, or if some positive modifications are introduced. For example, borders were recently closed again on 24 December through the Administrative Decision 2252/2020. However, this time nationals were allowed to enter the country, which was an improvement compared to Decree 313/2020 that originally barred nationals. Therefore, there may be reasons to believe that the State might continue to enact better responses to COVID-19, with a focus on upholding and respecting human rights obligations.