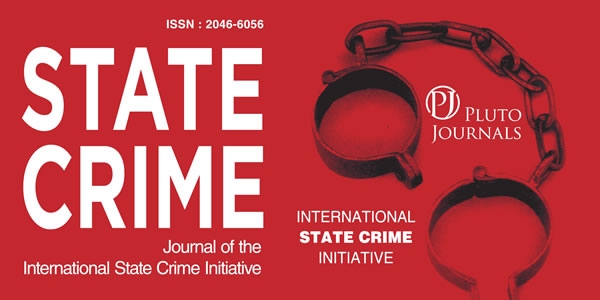 This special issue of State Crime seeks to investigate how changing patterns of state crime are being shaped by the massive growth of a digital communications infrastructure which permeates everyday life for billions of people through the explosive spread of networked mobile devices, social media platforms and cloud computing systems. It will also highlight how and to what extent these same technologies and infrastructures can be repurposed to expose and resist state crime. The long-standing entanglement between monopolistic digital media corporations, the government and military has facilitated the creation of privatized systems of mass surveillance, alongside the expansion of mass surveillance systems controlled by states. Is this leading to the development of a ‘networked authoritarianism’, which in turn is altering state-society relations and creating a fertile environment for unaccountability, corruption and human rights violations?

While amateur, user-generated digital content can be used to challenge the information monopoly of professional media conglomerates, a more nuanced understanding of verification methodologies is needed to enrich the critical discourse on citizen participation in human rights reporting. More importantly, emergent forms of digital activism can highlight how civil society can serve as a counterweight to the political and economic hegemony of states and corporations. Here, case studies of digital resistance from below can further demonstrate the extent of civic engagement in (1) naming, defining, exposing and challenging state crime (Green and Ward, 2004); and (2) developing a more open, democratic and participatory digital architecture which facilitates ‘unmasking the crimes of the powerful’ (Tombs and Whyte, 2003).

We welcome submissions for this special issue on ‘State Crime and Digital Resistance’ with a focus on the following three sub-themes:

We will be convening a workshop at QMUL for potential contributors to the special issue on 5th May 2017. This will provide a valuable opportunity to present and discuss research which will form the basis of accepted articles. The workshop will also serve as a forum for the exchange of ideas with other contributors to shape the intellectual agenda of the special issue.

Please indicate if you would like your paper to be considered for inclusion in the workshop.

All submissions will be subject to a full peer review process. The timetable for submission and publication is as follows:

Anyone wishing to discuss a possible submission to this Special Issue should feel free to contact Louise Wise (l.wise@qmul.ac.uk), although there is no need to do so nor formally register interest.

State Crime is the first peer-reviewed, international journal that seeks to disseminate leading research on the illicit practices of states. The journal’s focus is a reflection of the growing awareness within criminology that state criminality is endemic and acts as a significant barrier to security and development. Topics covered by the journal include, torture; genocide and other forms of government and politically organised mass killing; war crimes; state-corporate crime; state-organised crime; natural disasters exacerbated by government (in)action; asylum and refugee policy and practice; state terror; political and economic corruption; and resistance to state violence and corruption.