Algeria and the threat of natural disasters 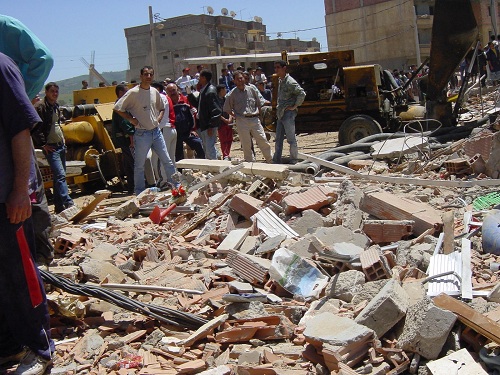 Sometimes dams burst, fires rage, buildings collapse, planes crash. But, although much is said about the causation, predictability, mitigation and management of disasters, we cannot really talk about a theory of natural disasters. Even so, it is something political analysts might contemplate when faced by the intractable question of how long Algeria’s regime – one of the world’s most dictatorial, repressive and corrupt – will last.

The Algerian regime and its western allies, notably the US and most EU countries, portray the country as one of the MENA region’s few remaining poles of stability. That, however, is a chimera and not how most Algerians see it.

Algeria is a country in a state of permanent civil unrest. According to an investigation by Algeria’s Ligue pour la Défense des Droits de l’Homme (LDDH) (Echorouk 03.04.15), police call-outs in response to anti-government protests “have been running at approaching 15,000 [a year].” In 2010, police data put the figure at just over 10,000. That shows an increase of some 50% in about five years.

Even if these data are not directly comparable, they suggest that unrest is nationwide and increasing. So too is violence: Algeria’s education ministry recently announced there had been 40,000 reported cases of violence in Algeria’s schools in 2014, with many going unreported because of fear.

In a country whose rulers have long abandoned any semblance of concern for the human rights, interests and wellbeing its citizens, such demonstrations have become little more than a mutually intelligible language of communication between government and citizens. Public confrontation with the local authorities and police is the one language that the government understands and listens to when it comes to demands for such things as housing allocations, utility supplies, road and general amenity repairs, the resolution of labour issues, etc. As a spokesman for the opposition Rachad Movement put it: “Algeria is in a state of revolt but without a revolution”.

The increase in such protests does not mean that a national uprising is imminent. It is more because people know the government is now weak, fearful of organised political unrest and panicking as the current oil price-driven economic crisis deepens. Algerians know that the government is now ‘buying off’ protests, which merely heightens the incentive to protest.

Indeed, that is how Algeria effectively “bought off” the Arab Spring. The government’s response to some five days of rioting in January 2011 was to restore food subsidies and increase state salaries. High world oil prices, at least until late-2014, alongside an immensely powerful and sophisticated repressive apparatus, have enabled Algeria’s regime to contain such unrest.

Making a national rebellion even less likely is Algerians’ fear of a return to the violence of the 1990s, Algeria’s “civil war”, which saw some 200,000 deaths, ostensibly in a war between Islamists and the army, but in which the secret intelligence and security service, the DRS, and army probably killed as many innocent civilians as the Islamists.

However, in the last few weeks, there has again been talk of an “explosion” and a national uprising, not just on “the street” and in the social media but amongst some of the country’ senior political figures.

Ahmed Benbitour, a former prime minister (1999-2000), said in an interview with El Watan that “the most likely route for change is through an explosion of the street.”

Noureddine Boukrouh, a former minister and presidential candidate, also warned “Algeria risks a bloodbath.” Algeria, he said “will sink into another bloodbath before the end of this decade. There will be two million dead, if things are not corrected within the next two years.”

Abderrazak Makri, president of the Mouvement de la Société pour la Paix (MSP), warned “The clash between the Algerian people and the political system will take place before the end of 2016.”
Algeria is facing a deepening and potentially catastrophic economic crisis. Word on the street and amongst many of the middle classes is that “the money will run out in the second half of 2016,” much earlier than government claims. “When that happens,” they say, “there will be “no alternative. The uprising will happen as soon as the money runs out.”

Such views take us to Algeria’s perennial questions: Will the army intervene? And, will Algerians, after their experience of the 1990s, really will rise up?

The position of the army in Algeria’s political firmament is once again the subject of controversy. A fundamental tenet of the constitution is that the army keeps out of politics. However, at the end of May, General Gaïd Salah, Chief of Staff of the armed forces, placed the army centre stage by publicly supporting one faction in the ruling FLN party. This caused widespread outrage, raising the question of whether the army would intervene to support the government against civil opposition forces.

The army has turned on its own people before. Hundreds were killed in 1988 when it fired on demonstrators, losing whatever remained of its largely mythologized role as the “honourable guarantor of the revolution.” Led by the DRS, it was also an integral part of the “terror” of the 1990s.

The Algerian government repeatedly claims that its constitution forbids sending Algerian troops to fight abroad. The constitution actually makes no such prohibition. But, one reason why the government does not send its troops abroad is because their morale and performance has become an unknown. Although the major military power in Africa in terms of equipment and funding, Algerian troops are thought to be low on morale and with their loyalty to the regime in question. Adventures abroad could end in humiliation.

In a Wikileaks cable in December 2007, the US Ambassador to Algeria, Robert Ford, described General Gaïd Salah “as perhaps the most corrupt official in the military apparatus”. Armies that are so corrupt at the top and which are used for killing their own people are generally low on morale.

Moreover, it is safe to say that neither Gaïd Salah nor the Bouteflika presidency has the undying loyalty of all senior army officers. If the Algerian people were to rise up against their rulers, there are no guarantees on which side the army, or many of the divisions within it, might place itself.

The army command knows this, which is why many Algerians believe that the reason Gaïd Salah is currently mobilising so many troops and almost certainly exaggerating the security threat from ISIS and Libyan based “terrorists” is to keep senior officers’ minds on their jobs, not politics.

Which brings me back to the question of whether the Algerian people will rise up. Such a question is impossible to theorise. Their belief that “the money is running out” will make them increasingly angry and desperate and move them to a more revolutionary mood. But, “money runs out” over a period of time, not overnight.

If we are looking for the trigger, it could well come from a natural disaster. In 2001, some thousand people died when heavy rains and mud slides collapsed many buildings in parts of Algiers. When youths discovered that the floods and death toll had been made worse in the poor Bab El Oued region by the DRS having blocked up the storm drains in the 1990s, public anger was unleashed on the government.

Today, the most likely major natural disaster facing Algeria is an earthquake. The country is astride a major earthquake zone and experiences some three minor shocks a day. The last big earthquake was in 2003 when a quake of 6.8 magnitude in the Boumerdès region of east Algiers claimed 2,271 lives. Before that, a quake of magnitude 7.3 in Chlef in 1980 killed around 3,500. The same town was destroyed by a 6.8 magnitude quake in 1954.

The 2003 quake gave a foretaste of the Algerian anger that I suspect is to come. On that occasion, the emergency services were appallingly inept. As for President Bouteflika, he did not visit the ruined area until some 3-4 days after the quake, and then, it seems, only because the press was questioning why he had not yet visited the ruined areas. When he finally arrived, by car, he was so heavily stoned by the angry crowd that he had to be rushed from the site immediately for his own safety.

In February, an earthquake engineer and seismology expert at Algeria’s Centre de Recherche en Astronomie Astrophysique et Géophysique (CRAAG) highlighted the risk posed by the Blida fault line, just behind Algiers. Abdelkrim Chelghoum noted “a disturbing frequency in the Blida region that deserves a serious look, [as it] could augur a great earthquake to come.” He added: “Without being alarmist, it is imperative that the government launches an investigation into fault movements in this region where nearly a hundred small earthquakes were recorded in 5 months.”

Another big quake, on the Blida fault or elsewhere, would almost certainly trigger massive anger and unrest, as the extent of the damage to buildings and consequent death toll would reveal the extent of corrupt building practices, as many of Algeria’s best architects have already warned, in cutting corners and simply ignoring earthquake building standards.

Algerians are already incensed by the extent and scale of government corruption. When that corruption is translated into death figures, possibly running into thousands, any fears of the 1990s are likely to be shed. The security forces will then be sorely tested, with likely catastrophic outcomes for the regime.